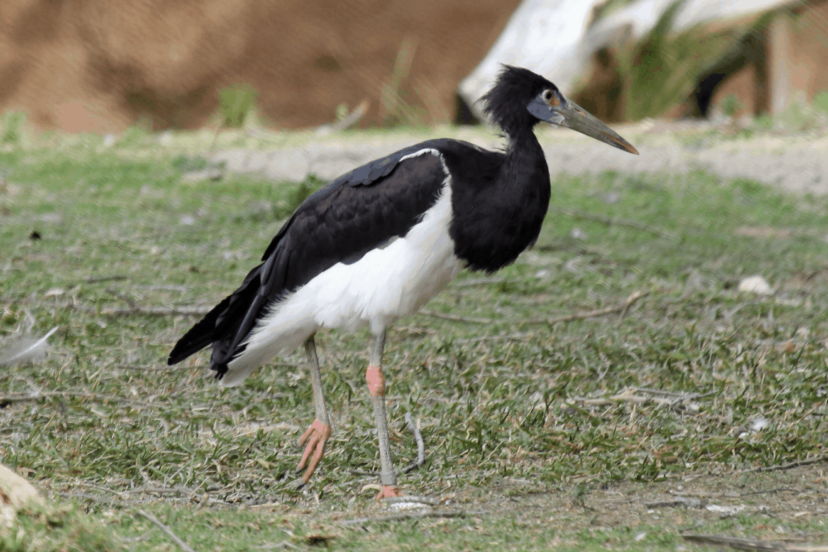 This welcome visitor, shuramurove, is also known popularly as the “rain bird” or the “rain stork” because it usually arrives here from its breeding grounds further north in Africa in November, just as our main summer rains are beginning here.  The sight of large flocks of them flying overhead, and swooping down gracefully to land in an open field, is taken as a sign that the rains have come.  You won’t see them around in winter.  In the summer, you can see them in parks and even suburban gardens with large open lawns where they can land and take off: being big birds, getting off the ground quickly requires space and a lot of energy.

Whenever they come, they’re always a pleasure to see: you have to admire their lovely pink knees and feet, the blue facial skin (which gets brighter when they are breeding) and the little red tip to the beak.  They usually depart north again by April, though apparently some like it so much here that they stay over the winter months (though I have never seen this).

Abdim’s is the smallest of the storks we see here, but it is still quite big: 76 cm, weighing 1.3 kg.  They pace over the grass catching insects, especially grasshoppers, locusts and crickets, army worms and other small animals.  The book says that they are usually silent in Southern Africa.

I said that they breed north of the Equator: they are here for their summer holidays, you might say.  Other kinds of birds come here specifically in order to breed and rear their chicks, but the Abdim’s come in their non-breeding season. The feeding is good during our rainy season.

Storks, like other big birds such as eagles and vultures, are great fliers, with large and broad wings: this gives them good lift and makes them excellent gliders, minimizing the necessity to spend energy flapping their wings.  Notice on the picture above, the feathers that protrude from the end of the wings like “fingers”.  These prevent a kind of air turbulence that develops at the end of the wing when they are flying and reduces efficiency: you will have seen that large aircraft nowadays have a similar up-turned spar at the end of their wings – for exactly the same purpose.  So science has copied nature.

Why do they fly in formation, or patterns?  Again, it is a matter of flying efficiency: because of the way the air flows over and under the wings and the turbulence that this creates, the point immediately behind the wing-tip of the bird in front is where the following bird experiences least resistance and therefore easiest flying.  That accounts for the V-shape of most bird flying formations.  On long journeys the lead birds, who don’t have the advantage of following another bird and so use more energy, take it in turns to take the strain.  Large gliding birds like these storks regularly make use of “thermals”, columns of air rising over patches of ground heated by the sun, or bush fires.  They position themselves in the rising column of air and all they have to do then is circle round while the air takes them higher and higher: since they don’t have to flap their wings, this is a great energy-saving technique.  And, when they have gained sufficient height, they can simply glide leisurely across to the next thermal for the next free ride into the upper air.  Humans also use thermals for the sport of gliding, and gliders often meet these big birds eyeball-to-eyeball high above the ground.

LAST WEEK’S QUESTION: Why do some birds lay eggs with a sharper point at one end while others lay more spherically-shaped eggs? It’s because eggs that have one sharp and one blunt end will always, when they roll on a flat surface, move in a circle and return to where they started.  They don’t end up far away.  More spherically shaped eggs will tend to roll further away.  Birds that lay their eggs on the flat ground, particularly if the nest is very simple, tend to lay eggs that are more pointed since their eggs are more likely to roll out of the nest; whereas those birds that nest in well-enclosed structures off the ground or in holes in the ground or in a tree can afford to produce eggs that are more spherical as there is little chance that they will roll away.