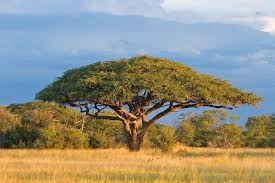 Australia has more than 800 different wattle trees. The Australian wattle acacias, therefore, outnumber the African acacias. So, according to the rules dealing with the formal botanical names given to plants, Australia keeps the Acacia name for their wattles.

Scientists give scientific names to plants according to specific rules. The purpose of the rules is to identify the plant and ensure that every group of plants has only one correct name that is accepted worldwide. The scientific name is not always useful for describing the plant and is sometimes not even accurate.  The name “acacia”, for example, from now on belongs to the Australian wattles, even though the word acacia refers to thorns, and those wattles have none!

We know that when we look them up in older records they are there, called Acacia. If we look them up in new records, such as on the internet, then we must remember that straight thorn acacias are now called Vachellia, and the hooked thorn acacias are called Senegalia. The species name is not changed, so Acacia abyssinica is now called by botanists Vachellia abyssinica.

We need not be confused, and you will notice that I am using common names – msasa, aloe, mopane, baobab – when I introduce a plant, and the botanical name when I start going into details.  Let us get straight into a first example.

In Zimbabwe, English speaking people best know this tree in Nyanga, for its umbrella shape, its spreading branches and its dark trunk. Its flowers are in the form of small, yellow balls. Now we can mention another difference between straight thorn and hooked thorn African Acacias.

This tree is common on the banks of the Limpopo and also on the Bubi, Mwenezi, Runde, Save and other rivers and pans of the southern lowveld. Surprisingly, it is absent in Zimbabwe’s Zambezi Valley, though it is present further downstream in Mozambique, and its range extends as far north as Kenya.

This very striking tree found in low-lying, swampy sites and its common name comes from its association with the malaria regions of southern Africa and a belief that it was the tree and not the mosquito that was responsible for the disease. Those low-lying, swampy sites are not suitable for other trees and you often see fever trees growing together in groups here.

The name “xanthophloea” (pronounced “zan-tho-flow-ea”) comes from the Greek xanthos (yellow) and phloios (bark) in recognition of its smooth, yellow or greenish-yellow bark. The trees are popular in gardens in Zimbabwe, South Africa and Namibia, though they have a reputation for falling over after very rapid growth.

It is chlorophyll in the bark that gives the distinctive colour. Chlorophyll is the green pigment in plants that uses the energy of sunlight for photosynthesis, normally a function of the leaves of a plant. In the fever tree however, photosynthesis is shared between the leaves and the bark, and may be why the leaves of such big trees are so small and few.

It exudes a sticky resin or gum that is used in some parts of North Africa in cooking, a variety of ‘gum arabica.’ (In my garden it is loved by night apes.)

Its new botanical name is Vachellia, so you will know its thorns are straight and paired, and its flowers are small, pale yellow balls.

The Shona and Ndebele names are very descriptive, and very accurate. The Flame Thorn is a common, widespread tree in Africa, from Senegal in the west to Sudan in the east, and south to South Africa and Namibia.  It grows in dry, wooded grassland and on rocky hillsides, often forming thickets in ‘jesse bush.’ It grows into an untidy, many-stemmed shrub up to 3-5m in height, often scrambling onto other trees. The most striking feature of this plant are the deep red to purple-red pods held in bunches which account for the common name ‘flame thorn.’

The foliage is dark green and fairly dense, with new growth often tinged purple. It has very many single, hooked prickles up to 8mm on stems and tiny prickles on the underside of leaves.

The flowers are very showy, creamy-yellow in clusters of spikes that look like caterpillars. They are scented and make an attractive show from December to March.

The leaves are the larva food for a number of butterfly species and birds such as apalises and wood hoopoes are often seen collecting insects off the flowers, leaves and trunk.

In parts of northern Zimbabwe it was planted along water courses as a barrier during the Liberation War, where it still persists today.

It is used in traditional medicine to treat constipation and abdominal pains. Its branches and stems and roots can be stripped for use in making baskets.

Here is a small complication in the acacia story. Faidherbia is a ‘group’ containing just one species, Faidherbia albida. For many years some botanists have wanted Acacia albida to be recognized as Faidherbia, and that is now widely accepted (though there is still discussion whether there is one species or two, one smooth, the other hairy). It occurs in Africa and the Middle East, and has been introduced to Pakistan and India. This one we can stop calling Acacia, and some people use Albida as the common name.

This is a large tree commonly seen on the banks of the Zambezi River, with whitish bark on young branches, becoming greenish-grey. It has straight thorns, up to 2cm long and paired.

Its many pods are reddish-brown to orange when ripe, curled and twisted like an apple peel.

The tree is very unusual as it is leafless throughout the rainy season. It comes into leaf during the dry winter months and flowers May to September, and this is why ‘winter thorn’ is one of its English names.

Its deep penetrating tap root makes it highly resistant to drought. In southern Africa it avoids dry and upland areas and occurs along the floodplains of the Zambezi and Limpopo rivers. As well as that deep tap root are roots extending sideways out from the tree. Reproduction is mostly by young trees growing out of the ground from these roots and eventually having their own, independent root systems. There is concern, for instance at Mana Pools, that the absence of young albidas that is being observed is somehow connected to the control of flooding by Kariba Dam.

The seed pods are eaten by livestock and game. They are much loved by elephants, antelope, buffalo, baboons and others, but strangely ignored by warthogs and zebras.

Those are the four acacias most easy to recognize and describe. There are many other acacias in Zimbabwe, and acacias near where you live or work might be more difficult to identify. Do the research, ask people who might know, look in the books, go onto the internet.