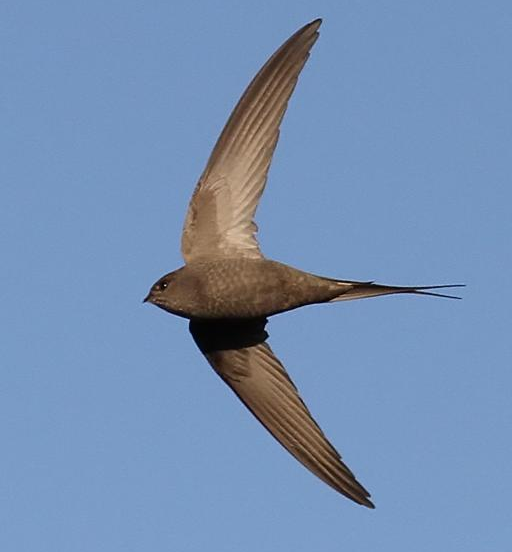 Nyenganyenga, mherepere (Shona = swallow, similar to but smaller than a swift);

You can see – but you have to look very carefully to do so – these small but very fast-flying birds around almost any big palm tree in the area, especially around dusk: they swirl around like tea-leaves in a stirred teacup.  The other evening I saw something I have never seen before: a large flock of maybe 40 or 50 of these birds swirling round in the sky above, much agitated for some reason and making quite a noise.  Are they not a very pleasing shape: smoothly balanced curves, legs and feet safely tucked away in the under-plumage for a maximally aerodynamic profile, and with a satisfyingly sharp and forked tail?

You see them out every early evening without fail, from about 5.00 pm, catching their fill of small flying insects (“aerial arthropods” my book calls them).  These birds are incredibly aerobatic fliers, swooping, jinking and darting as they scoop up those arthropods in their beaks, twittering constantly.  You might think that impossible: twittering with an aerial arthropod actually in your mouth: but then you are not a Palm Swift.

In fact, there are more things than arthropods that they catch in their mouths, as will be explained below.  They are busy and fast moving birds and it is hard to get a good look at them, even with binoculars: I have never seen one seated and stationary.  Even in the air, however, if you look carefully you can see how the tail, which mostly looks as if it is a single spike projecting backwards, is actually forked, as it appears in the picture above.

These birds will never be seen on the ground: their element is the air.  They don’t do the walking thing: those legs and feet are not for walking.  When they have finished flying, you will see them swooping in under the palm fronds and disappearing deep inside the tree.  That is where they roost, or sleep, at night; and where they build their nests.  (They cannot actually take off from a position of standing on the ground.)

You might ask how they can do that: for one thing their legs and feet, which they use for clinging onto palm branches, are so small and weak that they cannot be used to collect nesting material to build a place to lay and hatch their eggs and raise their young.  The solution is to build their nests out of airborne material that they can catch in the air in flight: feathers especially, of course, but also dry grass and grass seeds that drift in the wind.

The other problem is that the branches of palms always hang steeply downwards: this provides good shelter and cover, but it is not easy to build nests in there.  The Palm Swift solves this problem with glue: they glue the nesting material together and onto the palm fronds with a special sticky saliva that hardens when it dries.  They also glue the eggs in place as well, to stop them falling out.  This makes it impossible to turn the eggs over while they are hatching, which many other birds do regularly; but this does not seem to harm the swifts.  I don’t know if they actually glue the hatched chicks before they are fledged with feathers, but it does look a bit like that in the photo above.  You can make out the chicks seemingly stuck onto the hanging leaf.

Finally, you might be interested that the hardened old nests, not of these birds but of one like them, namely the strangely named Edible-Nest Swiflet (aerodramus fuciphagus) I know that phagus is about eating so I guess fuci is about nests),. Their are actually regarded as a great delicacy by the Chinese who boil the nests and make a soup from it, or rather from the glue, the dried sticky saliva.  For all I know, it might be delicious but please don’t try this at home: let the birds live in peace.