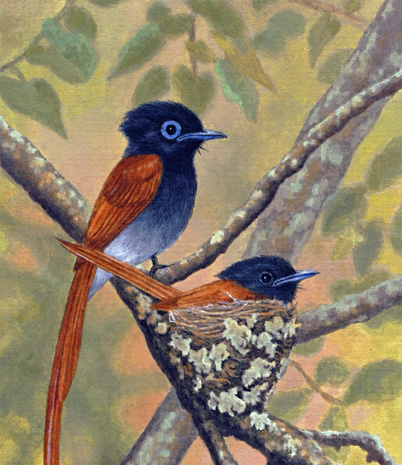 This is certainly one of my favourite birds: they come regularly to our garden during the summer rains.  They must be nesting somewhere but I haven’t yet spotted the tiny and very well camouflaged nest.  I hear them more than see them: it’s a pretty noise which is – for me now – very much part of the onset of summer here.  I look forward to hearing them again soon.  The book says that they are an inter-African migrant, arriving here in September or early October and departing – some populations over-wintering in KwaZulu-Natal or southern Mozambique – in March or early April.

They’re quite small at 17cm, though the male-with-that-tail can be as long as 37cm.  The most impressive thing, of course, is the long trailing central feathers of the tail of the breeding male.  They make good use of this tail in mating displays, I imagine, and I have seen a male sitting on the small cup-shaped nest with its head sticking out one side and the long tail feathers draped over the other, moving gently in the wind.  The tiny nests are lovely things, as well, so much so that I must include another picture.

See the spider-webs used to secure it to the branch?  And the lichen stuck on the side as camouflage?  You can see that, for me, everything about these birds is quite, quite perfect!

It perhaps should be said, though, that the males can be (what else?) disconcertingly aggressive and quite noisy, in their fashion.  But it is a pleasant sound: the Greek scientific name for the genus (Terpsiphone) registers the ‘delightful voice’ appropriately.  The same can hardly be said of the Latin species name (viridis) which means ‘green’: I am blessed if I can see any green there.  What I see is a beautiful dusty grey which, side-by-side with the equally beautiful chestnut brown and the pale blue of the beak and darker blue of the eye-ring, makes one of the loveliest colour combinations I know.  Just look at the close-up of the bird on the nest.

They are monogamous – faithful to one mate – or so the book says: well, I for one am willing to give them the benefit of the doubt (I doubt if everything about the secret life of birds is known).  Males and females both cooperate in building that lovely nest and both of them sit on the eggs: this cannot be said of all species of birds.  They return to the same locality to breed, so the birds you saw this year may well be the same individuals you saw last year.   It is said that they may use the same tree, year after year.  They eat insects mostly, flying insects I suppose: you can see them catching these on the wing.  But they also take spiders and small berries: and, for such beautiful creatures, who could begrudge them those?

Watching them fluttering in and out of trees, with the long tail of the male streaming and swirling behind him, makes my heart leap.