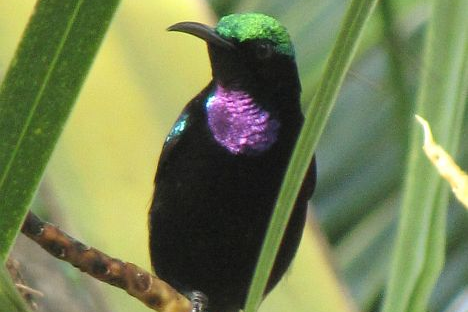 (Genus: chalcomitra, Greek = copper or bronze headband or cap; species: amethystina, Greek = amethyst coloured) (if you’re interested in taking this one further, you might like to know the derivation of the word ‘amethyst’.  It’s a blueish-violet precious stone of course, but the name – according to my dictionary – is related to the Greek amethystos-a, and the privative methyein, meaning ‘to be drunken’, and methy, meaning ‘wine’ [from which we get ‘mead’, the wine made out of honey] all of which comes from the Sanscrit madhu, meaning ‘sweet’.

So question: is the colour – blueish-violet – descriptive of the wine or of the face of the drunken person?  And is ‘methylated spirit’ spirit which has been made bluey-violet, in order to make them clearly different from water and decrease the chances of someone drinking them by mistake?)  (I bet you’re wishing you had not started on this.)

This is one of the five kinds of sunbird that you can see around Harare (the others are the Yellow-bellied, the White-bellied, the Miombo Double-collared, and the Scarlet-chested, all to be featured in this series in due course, of course).

I have seen trees positively alive with sunbirds of at least two kinds, hopping around the branches like sand-fleas, and making a tremendous racket (for a small bird, a sunbird can make a lot of noise).  One sat obediently in the sunshine to enable me to catch the beautiful bluey-violet throat and shoulder patches, as well as the metallic-green cap.

Like all iridescent birds, when not in direct sunlight and at the right angle, they just look black – hence the old name, Black Sunbird.  So what colour are they – really?  In themselves?  Bluey-violet + metallic green?  Or black?

Moving swiftly on from that meaningless conundrum, we note that like other sunbirds they drink nectar (hence the curved probing beak and long barbed tongue for getting into the heart of flowers) but also eat insects (“and spiders”, my book says).

They are monogamous, meaning they mate with a single partner – though whether one should add “at a time”, as in ‘serial monogamy’, or “for ever”, I don’t know.  Their nests are parasitized by Klaa’ Cuckoo and occasionally the Green-backed Honeybird, both of them much bigger birds. Imagine a big fat hungry cuckoo chick bulging in the tiny nest demanding insistently and imperiously to be fed-fed-fed-and-fed-again by its two diminutive enslaved ‘parent’ sunbirds.

Sunbirds can perform a rather rare feat in the bird world: they can hover: that is, flying but staying still in space.  Of course, they are not as good at this as hummingbirds (which we do not get on this continent and which can actually fly backwards, a feat that no other bird can do).  But sunbirds are good enough at hanging in front of flowers, staying still enough to sip the nectar without landing.  How does a bird hover?

Many birds stay up in the air because of the airfoil cross-section shape of the wing which creates lift underneath the wing when air flows over the top of it.  But air will only flow over the wing if EITHER there is a strong wind (and some non-hovering birds do stay stationary in high winds like this) OR if the bird is in forward motion, pushing its way through the air.

They move themselves forward by flapping the wings – pushing downwards and also backwards against the air to propel themselves forward, retaining the airfoil shape all along, of course.  And here is a very clever bit of avian engineering: on the upward stroke, they allow the feathers to open and let the air through and so it does not push them downwards or backwards again.

But if there is no wind, and you’re a bird that wants to hover in front of a flower to sip nectar without actually perching, what do you do?  Sunbirds’ wings are not airfoiled in cross-section, or at least not much: they never glide as far as I have seen.  What they (and other hovering birds such as the Pied Kingfisher) do is very clever: instead of opening their feathers on the up-stroke, which is basically to lose the energy spent in that up-stroke in order to prepare for the next down-stroke, they ‘reverse’ their wings on the up-stroke, moving the wings in a figure of eight.

I think this is more or less what I do when I am in the swimming pool and want to stay in the same place without swimming: moving my arms back and forth through the water, pushing downwards on both the backward and forward strokes by changing the angle of my hands.  (If you can’t follow this, try it next time you are in the pool.)  Sunbirds, and hummingbirds even more, flap their wings in this way – and they do it very, very fast indeed.