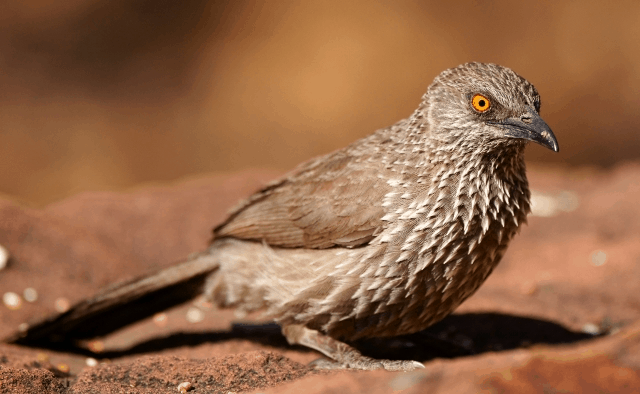 Genus Turdoides (Latin = ‘thrush-like’, ‘like a thrush’ i.e. another type of bird) species jardineii (named after Sir William Jardine)
Shona: Dywedywe or hochahocha.  (Both of these sound onomatopoeic: the first is pronounced roughly as ‘Djgwe-djgwe’, which is strongly reminiscent of part of their loud chorus)

This angry-looking bird lives, breeds and travels in groups of between 4 and 12 or so: very noisy, very active, aggressively flicking aside leaves etc. to find insects and sometimes small reptiles. It also eats seeds and small fruit.  They are hard to miss and common in Harare suburbs, very frequent visitors in the early mornings and evenings.

They are monogamous, meaning that they mate in single pairs, but co-operative, meaning that the group works together to raise the chicks.  As they move together as a group, they are constantly calling to each other, presumably to keep the group together.  Their alarm call is very characteristic: starting with an individual bird, it swells and grows louder and louder to a deafening crescendo.  Having said that it is “very characteristic”, I have to admit that it might be confused with the sound of the Green or Red-billed Wood-Hoopoe (earlier in this series) which is also a babbling sound rising to a crescendo.  But the Wood-Hoopoe is less harsh, more joyful – more like a loud giggling –  than the Babbler which is really a cackle.

The group behaviour of birds is interesting, and somewhat like the group behaviour of other non-bird animals.  As I have said,  these Arrow-Marked Babblers  move around in gangs of a dozen or so, like troops of monkeys or wild dogs, constantly chattering among themselves.  If you come across a group on the ground foraging for food, look around and you will find one bird sitting in a vantage point, ready to give the alarm call in case of any danger.  It’s a sentry, a watchman, keeping guard; they take it in turns to do this duty.  Because there are many of them, the young birds don’t have to take up adult duties of foraging for food and defence very early in their lives, as is the case with other birds, some of whom have to fend for themselves almost from the moment they get out of the egg.  This means that the young can indulge in kinds of playing, rough and tumble like puppies, though I have only seen this on film and not in the field.  For most other kinds of birds, if young birds do ‘play’ at all, it is more directly connected with adult life, mostly to try out and strengthen their wings and wing-muscles and, for birds of prey, practising their hunting and killing techniques.

Look how striking is the colour of the eggs of the Arrow-marked Babbler: what an amazingly, creamily beautiful blue!  Imagine a car that colour; or a ceramic jug; or a pair of socks.  It is not quite sky- or sea-blue: what is it?  No one really knows why the Arrow-Marked Babbler’s eggs are this colour.  Eggs are normally coloured for reasons of camouflage to protect them from predators.  Birds which lay their eggs straight on the ground or in other vulnerable places need to camouflage them very well, while those that are in less dangerous places, say on ledges of cliffs or in tunnels or holes, colour matters less.  The eggs of the Arrow-Marked Babblers would be difficult to hide but it seems that they can afford the risk of such brightly coloured eggs, presumably because they breed in large flocks and work together to fend off predators.

Apart from camouflage, another and opposite reason for the colour of eggs can be precisely to make them very obviously distinct from the eggs of cuckoos and other nest-parasites who lay their eggs in nests not their own.  The owners of the nest need to be able to recognise foreign eggs and turf them out the nest.  Some of the parasites, meanwhile, have come to produce eggs with colours that mimic those of their hosts, thus getting around the problem.  Arrow-marked Babblers, in fact, are the main hosts used by the Levaillant’s Cuckoo, so perhaps this is a reason for the bright blue.  If so, it does not seem to be very effective, though, since that Cuckoo seems to be undeterred.  But perhaps it has manage to disguise its eggs by matching the same wonderful blue…?  How can I find out the colour of the eggs of the Levaillant’s Cuckoo?  I have just Googled “Levaillant’s Cuckoo eggs”, and I find that they are, indeed, a very similar shade of blue!

Why do birds’ eggs – or many of them – have pointed ends?  Answer next week….