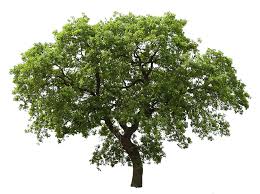 All over the world trees have been venerated, and they play an important role in many of the world’s religions. Trees have their roots in the ground and their trunks and branches reach upwards to the sky. They grow taller than us and live longer than us. They provide shade and shelter, food and fuel, building materials, musical instruments and tools, furniture and ornamental objects.

In its most simple definition a tree is a long-lived plant with a stem or trunk, supporting branches and leaves. In a wide definition, we include the taller palms, aloes, tree ferns, bananas and bamboos as trees.

Trees are not a single plant group but members of a wide variety of plant species that have independently developed a trunk and branches as a way to get their leaves into full sunlight. A typical tree has branches supported clear of the ground by the trunk. This trunk usually contains woody tissue for strength, and vascular tissue to carry materials from one part of the tree to other parts. Most tree trunks are covered by bark as a protective layer.

Below the ground, the roots branch and spread out widely, with hairs on the tips of the roots that draw water and nutrients from the soil. The roots also serve to hold the tree in place.

Above ground, the branches divide into smaller branches and shoots. The shoots bear leaves, which capture light energy and make sugars by photosynthesis, providing the food that is distributed to all parts of the tree along the vascular tissues.

Trees usually reproduce using seeds. Flowers and fruit may be present in the process of producing seeds, but some trees, such as conifers, instead have pollen cones and seed cones. Palms, bananas and bamboos produce seeds but tree ferns produce spores.

Palms, bananas and bamboos produce seeds but they also do what is called vegetative reproduction, and gardeners will tell you that is actually quite common. A young tree might grow out of the ground not from a seed but from the root of a parent. Other examples of plant reproduction without seeds are:

Trees play a vital role in reducing erosion and moderating the climate. They remove carbon dioxide from the atmosphere and store large quantities of carbon.

The next “At Home in Zimbabwe” will be about Climate, Soils and People.