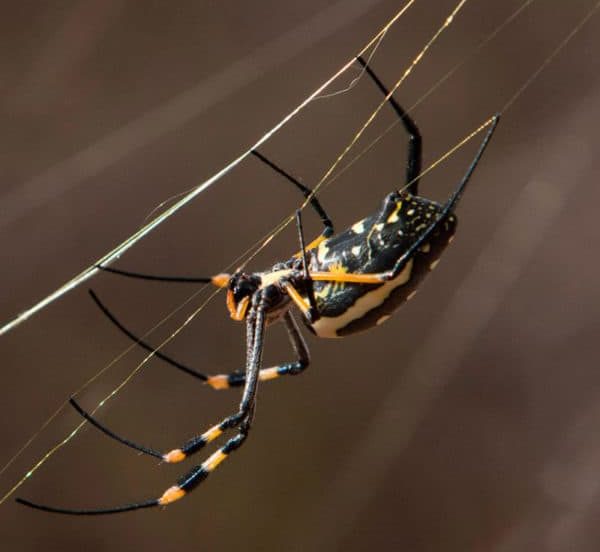 These large orb-weaver spiders are conspicuous towards the end of the rainy season but make their presence known as juveniles around February. They are common throughout much of sub-Saharan Africa from southern Africa to western Africa.

Their large yellow circular webs, spun between trees or shrubs, are about a metre in diameter and up to two metres above ground level. The viscid spiral of the webs are yellowish and the supporting strains are very strong that you feel resistance when you walk into them. The webs are semi-permanent and partially repaired when necessary, particularly the viscid lines and most of their activity is during the day.

The 20-40mm long female with a leg span of 100-200mm, brightly patterned in black, red and yellow, hangs head down in the web while the males, about 5-9mm long and leg span up to 25mm, take up station around the edges. They have a life span of about a year but the females out live the males by as much as 100 days, the males living on average for 217 days.

The females can produce up to four egg sacs and about 4,500 eggs per season. These are usually laid on a leaf or tree bark. The spiderlings are free moving until their third moult when they start building their webs. The juvenile spiders make complete orb-webs while the adult females have the top section missing.

Large golden orb-weavers feed on a variety of flying insects such as flies, beetles and grasshoppers. Although small birds such as waxbills, fire-finches and drongos are sometimes caught in the web, they do not seem to be eaten by these spiders. Sometimes other tiny spiders (dew-drop spiders Argyrodes) also live on the web where they scavenge insects too small for the Trichonephila to eat.

Vervet Monkeys have been seen grabbing these spiders out of their webs and immediately putting them into their months with the legs sticking out.

Three species occur in Zimbabwe and can be recognised by the colour and patterning of the females.

The female Banded-legged Golden orb-weaver Trichonephila senegalensis has legs I and II banded in black and yellow with brushes of black hairs on legs I, II and IV.  The large abdomen has distinct yellow and black bands both dorsally and ventrally.

The female Hairy Golden Orb-weaver Trichonephilia fenestrata has dark brown or black legs with brushes present also on legs I, II and IV. The abdomen has a distinct yellow and bluish black pattern dorsally.

The Red-legged Orb-weaver has legs which are dark with a reddish tint and the brushes of hair are less distinct. The abdomen is silvery-grey towards the front with a yellow spotted pattern on black towards the rear.

Most people take these spiders for granted because they are so familiar a sight, but very…

Scorpions and Scorpionism in Zimbabwe

With the onset of the hot and humid weather, scorpions will be out in abundance, having…