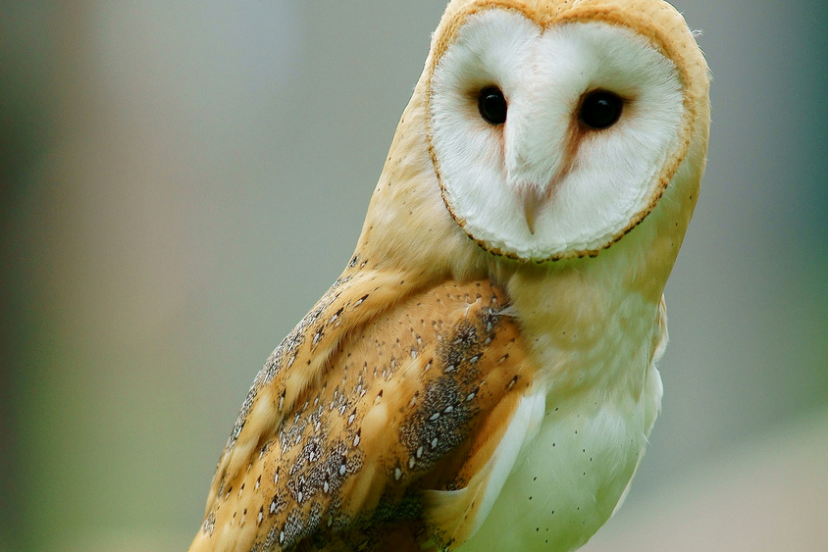 Call: https://www.allaboutbirds.org/guide/Barn_Owl/sound (Click on the link and press the correct button – you will need to scroll down a little to the African example).

The barn owl can make a loud hissing noise to warn off intruders, but the most common sound is the harsh screech when it is hunting, which you will probably recognise if you click on the link above.

Barn Owls are very widely spread across the world, in a number of different sub-species: Africa both south and north of the Sahara, north and south America, western Europe, the Indian subcontinent – but not, it seems according to the distribution map I looked at, in Asia or central and eastern Europe.  The Barn Owl is the standard image many people have for owls, with that distinctive ‘facial disk’ but without the ‘ears’ or ‘horns’ of many other owls.  Albeit without the fancy ‘hairstyle’ of the horned owls, the Barn Owl is a very handsome looking bird, with soft, soft plumage that enables them to fly almost without making any noise whatsoever, and lovely black and white teardrop-shaped markings on its wing plumage; and can you see the much smaller black teardrops on the breast?

Owls do have ears, of course: holes hidden under their feathers.  Indeed, they are popularly known as having exceptionally good hearing.  It is said to be 300 times better than that of the average pigeon although, to be honest, hearing is not the first thing that comes to mind when one thinks of pigeons: homing and direction-finding, yes, hearing or even intelligence, not so much.  As a matter of fact, the reputation of owls for having very sensitive hearing – being able to hear the tiniest rustling of a mouse in the grass and so on – is apparently a bit overblown.  “Most other animals, including people,” says my book, “hear almost as well as most owls do.”   The owl’s special silencers, soft feathers, fitted to their wings to cut down extraneous noise when they are flying, also helps, I am sure.  But what really is exceptional is the owls’ ability to pinpoint exactly where the noise is coming from, and in the dark, especially high frequency sounds such as the rustling of dry leaves.  Just the job, really: think of an owl as an echo-locator on wings.  And not having more than ordinarily acute hearing has its good side, too: imagine having to listen to your own fearsome screech at highly elevated decibels.

It’s the facial disk, so characteristically and fetchingly heart-shaped in the Barn Owl, that is the key to the sonic-location.  This is not mere decoration: the outer ring is made of stiffer feathers which channel the sounds into the ear which is located just on the edge of the disk.  The second picture above gives a good view of the actual ear-hole.  So the owl’s ‘ears’, in the sense of what it is that collects and channels the sound, which is what we normally think of as ears in our own and other cases, is actually the whole of its face.  The owl’s face is one big ear.  Makes you think, doesn’t it?

They have also got very good eyesight, of course, with eyes right in the front of their heads for binocular vision.  They can actually rotate their heads a full 270 degrees, almost like a turret on a tank, and this compensates for the immobility of the actual eye-balls (which are of course very large) in their sockets: for maximum sensitivity, turn the head (but also, of course, the facial-disk-as-ears) directly at the target rather than merely look sideways.

What actual advantage accrues, evolutionarily speaking, from the ability to turn the head completely upside down and backwards (as you can see in the photo above), on the other hand, is not so clear to me: unless it is precisely to look cute, which probably does have some evolutionary benefits, at least these days.  (See many YouTube videos for “cute owls”.)