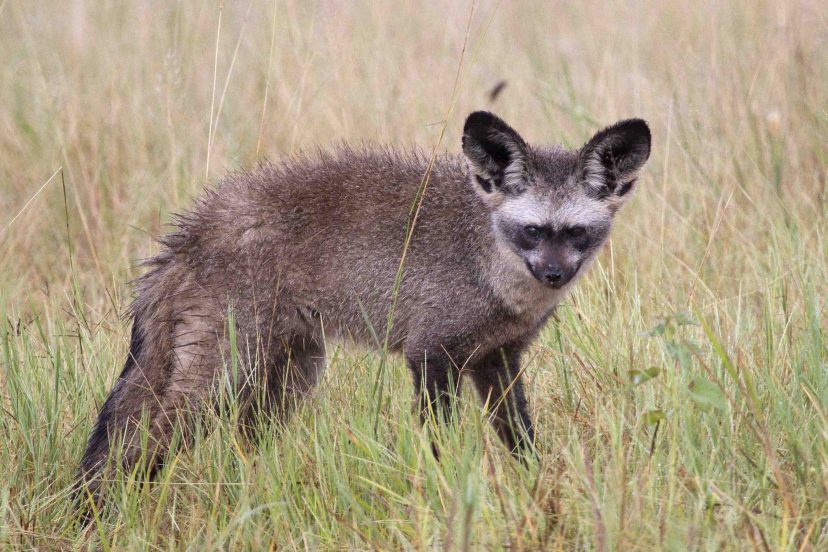 The only representative of the genus “Otocyon”

From the Greek Otus = ear & cyon = dog and then mega = large and again otus = ear – so basically the name means“eared dog with large ears”.

There are two subspecies of the bat-eared fox in Africa. One is found in east Africa, from Tanzania to southern Sudan and Ethiopia. The other subspecies is found in southern Africa from the Cape Peninsula in South Africa, through Mozambique and Zimbabwe and into Angola and Zambia.

Bat-eared foxes are adapted to arid or semi-arid environments. They are found in grasslands and the drier regions of savannas, along woodland edges, and in open acacia woodlands. They favour bare ground and areas where grass is kept short by grazing ungulates, whose dung attracts insects that provide a rich food source and where there is good visibility for detecting approaching predators. They will venture into areas with tall grasses and thick shrubs to hide when threatened.

When am I likely to see a bat-eared fox?

Bat-eared foxes are difficult to spot because they are small and cautious, and also often in burrows or only coming out after dark. You are most likely to catch sight of them in the evening or early morning. (The technical term for animals around at these twilight times is “crepuscular”.) In winter they are active during the day and in summer active at night – determined by when insects such as termites are most active.

How does a bat-eared fox communicate?

Bat-eared foxes have nine calls by which they communicate with each other, seven of these are low-pitched, only meant for use within the group and include a soft growling or whistling and a “who-who” sound. The other two are high-pitched yapping sounds when alarmed or attacking. They also use their tails and ears as means of communication, showing pleasure, fear, subservience, etc..

Is  the bat-eared fox territorial?

No, they mark territory around their den and have a home range but several groups can live in the same relatively small area, greeting each other at food sources and eating side by side.

Does the bat-eared fox have a den or usual resting place?

Bat-eared foxes can be said to live underground. They are capable diggers – prior to the birth of first pups a young pair will dig a burrow, consisting of multiple underground tunnels, chambers, and exits. They can also move into and expand burrows dug by other species such as aardvarks.

Burrows can be home to up to 10 foxes and a family may have several dens in its home range for shelter from extreme temperatures and winds, for escaping predators and for raising their young. Kits are raised in the den for 10 to 12 weeks but in warmer weather the family goes foraging together over an area of about 12 kms and often sleeps outside.

What does a bat-eared fox eat?

Bat-eared foxes are considered the only truly insectivorous (insect-eating) canid (member of the dog family). Harvester termites make up 70% of their diet. Most termites spend their days deep underground in their nests but harvester termites often feed on grass above ground, where they are then eaten by the foxes.

Because large herbivores such as wildebeest, zebra and buffalo also feed on this grass, bat-eared foxes are usually found near large herds of these animals. Furthermore, bat-eared foxes are also associated with these mammals since they eat the dung beetles that feed on and lay eggs in the ungulate’s feces, and the larvae of these beetle.

Apart from insects they eat spiders and scorpions (stings and all).  When insects are scarce, they will eat fungi, seeds and berries, eggs and sometimes mice.

Bat-eared foxes usually hunt or forage in groups, often splitting up into pairs, with separated subgroups moving through the same general area.  Foraging techniques depend on prey type, but food is often located by a characteristic pose – walking slowly, nose close to the ground and ears tilted forward, listening for the sound of insects scrabbling underground.

What are the breeding habits of the bat-eared fox

One captive individual lived for 13 years and 9 months.

Bat-eared foxes are hunted by many predators such as lions, leopards and cheetah (though they are too small to make a really sustaining meal for big cats), hyenas, jackals and eagles. (Diurnal birds of prey swooping from the sky generally represent the greatest threat for young bat-eared foxes.)

To escape from predators, the bat-eared fox relies on speed and its incredible dodging ability.  It can effectively reverse direction at a flat run without losing speed, using its long bushy tails as a rudder.  They prefer, however, to escape and lie dead still in long grass or to plunge into their nearest den entrance.

What are the special adaptations of a bat-eared fox?

Using its elongated and highly flexible lower jaw it can scoop up dozens of ants or termites at a time.

Not only are all these insects high in protein, they are filled with water (see the next point).

Underground dens – protect them from almost all their natural predators and have multiple entrances and exits, which can be used whenever they need to escape.

What is the important function of bat-eared foxes in the wild?

The Bat-eared foxes control harvester termite population in their habitat, eating up to 1.15 million termites per year.  As a result, they are one of the few wild animals that farmers like because they actually remove a pest that threatens stock grazing.

What do you call a bat-eared fox: –

Not endangered, but often killed by cars as they cross roads or investigate roadkill, and in some places hunted for their fur. Unfortunately, farmland continues to encroach on the wilderness and does reduce their natural habitat.

Pangolin – most illegally traded animal in the world

Pangolins are the most illegally traded wild animal in the world.  Estimates suggest one is being…