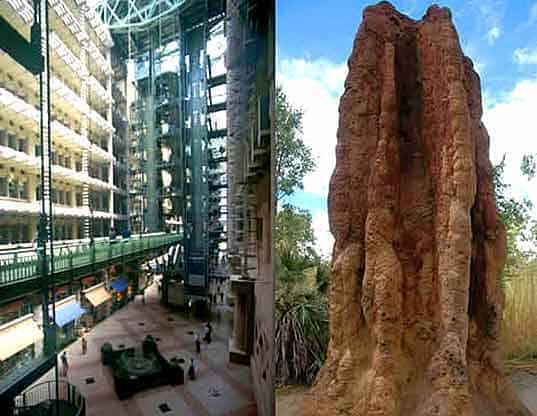 The Eastgate Centre in Harare, Zimbabwe, typifies the best of green architecture and ecologically sensitive adaptation. The country’s largest office and shopping complex is an architectural marvel in its use of biomimicry principles. The mid-rise building, designed by architect Mick Pearce in collaboration with Arup engineers, has no conventional air-conditioning or heating, yet stays regulated year round with dramatically less energy consumption using design methods inspired by indigenous Zimbabwean masonry and the self-cooling mounds of African termites!

Termites in Zimbabwe build gigantic mounds inside of which they farm a fungus that is their primary food source. The fungus must be kept at exactly 87 degrees F, while the temperatures outside range from 35 degrees F at night to 104 degrees F during the day. The termites achieve this remarkable feat by constantly opening and closing a series of heating and cooling vents throughout the mound over the course of the day.

With a system of carefully adjusted convection currents, air is sucked in at the lower part of the mound, down into enclosures with muddy walls, and up through a channel to the peak of the termite mound. The industrious termites constantly dig new vents and plug up old ones in order to regulate the temperature.

The Eastgate Centre, largely made of concrete, has a ventilation system which operates in a similar way. Outside air that is drawn in is either warmed or cooled by the building mass depending on which is hotter, the building concrete or the air. It is then vented into the building’s floors and offices before exiting via chimneys at the top. The complex also consists of two buildings side by side that are separated by an open space that is covered by glass and open to the local breezes.

Air is continuously drawn from this open space by fans on the first floor. It is then pushed up vertical supply sections of ducts that are located in the central spine of each of the two buildings. The fresh air replaces stale air that rises and exits through exhaust ports in the ceilings of each floor. Ultimately it enters the exhaust section of the vertical ducts before it is flushed out of the building through chimneys.

The Eastgate Centre uses less than 10% of the energy of a conventional building its size. These efficiencies translate directly to the bottom line: Eastgate’s owners have saved $3.5 million alone because of an air-conditioning system that did not have to be implemented. Outside of being eco-efficient and better for the environment, these savings also trickle down to the tenants whose rents are 20 percent lower than those of occupants in the surrounding buildings.

Who would have guessed that the replication of designs created by termites would not only provide for a sound climate control solution but also be the most cost-effective way for humans to function in an otherwise challenging context?

This article is taken from the site https://bigthink.com/strange-maps/kazungula-bridge Big ideas.Once a week. Subscribe to our weekly…