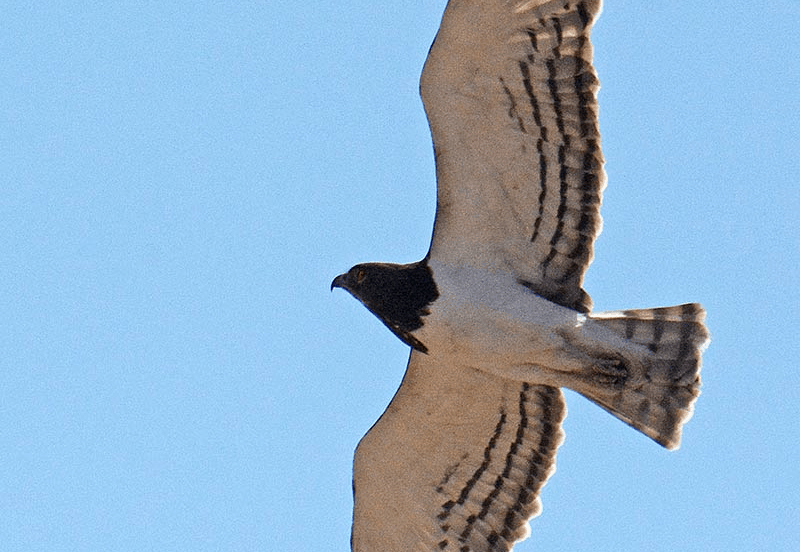 I saw this very handsome bird flying over the suburb of Harare where I live and work.  Though I have seen them in flight before, I have never seen one perched as in the picture above, and certainly not with a snake in its beak.

The book says that the usual habitat of these eagles is “semi-desert and desert edges to forest margins”, which hardly fits Mount Pleasant, and I think that I have never seen one “in town” like this before.  So it was an exciting moment to see it in our skies; it was relatively low to the ground, and I lost sight of it behind our chapel: perhaps it was after some prey in our field.  It just shows what you can sometimes see if you keep alert.

The Black-chested Snake Eagle eats lizards, water monitors, frogs, rodents and insects; but “mainly snakes”.  Are there any snakes in our Harare suburbs?  Well, I for one have seen a couple, though only very small and non-venomous ones.

Once I saw a young and very beautiful golden Brown House Snake climbing up the low stone wall at Rutendo to get into the flowerbed (not into the house!).  ‘Snake’ does not, of course, necessarily mean ‘poisonous snake’, and the Brown House snake is harmless except, of course, to its prey.  Such non-poisonous snakes taste just as sweet, I imagine, to a Snake Eagle, or possibly even sweeter.  There must surely be other snakes living around about us – in the field across Groombridge Road, for instance.

Once I saw from my office window two eagles in that field: I did not have binoculars and so could not identify them with certainty, and so did not include them in this list.  But I think they were Snake Eagles of another kind (Western Banded).  One took something that looked a lot like a large snake, perhaps a cobra, into one of the trees.

Incidentally, large birds like eagles are often seen from below, as they fly overhead, and so the colours and markings on the underside of their wings are helpful for identification: if you are thinking of getting a field guide to birds, I would recommend one that includes illustrations of underwing patterns.

I suppose that birds predating on snakes rely on stealth and surprise, speed and accuracy in avoiding snake bites, though I imagine that their feathers and scaled legs are also good protection.

The eagle in the photo is swallowing the snake whole.  Birds don’t chew their food: they don’t have the teeth and strong jaws and muscles that you need for chewing.  This is probably because that kind of chewing equipment is heavy and birds need to stay light to minimise the energy needed to fly: beaks and talons made of keratin are lighter than bone.

Once swallowed, birds ‘chew’ up their food chemically, you might say, with strong stomach acids, and some ‘grind’ it up into smaller digestible pieces in a specialized muscular “gizzard” which is lined with hard tooth-like grooves and ridges.  Some birds, such as geese and ostriches, that graze in the same way as cows or antelope actually swallow small stones and pieces of grit to augment the grinding mechanism in the gizzard.

A predator like this Snake Eagle must either grip its prey in its feet and tear it up into ‘swallowable’ pieces, or swallow it whole, perhaps when perched or sometimes in flight.  It cannot be an easy task to swallow a snake whole, even on the ground, let alone in flight!

In the case of birds that eat bones, such as our Snake Eagle and especially vultures, their stomachs are equipped with especially strong acids.  A Bearded Vulture (we won’t be seeing those magnificent birds around here, I am afraid) can digest a complete vertebrae from a cow in just two days.

Owls & Chameleons: What do they have in common?

Our planet is teeming with life forms, each busily following its life’s plan.  They all require…