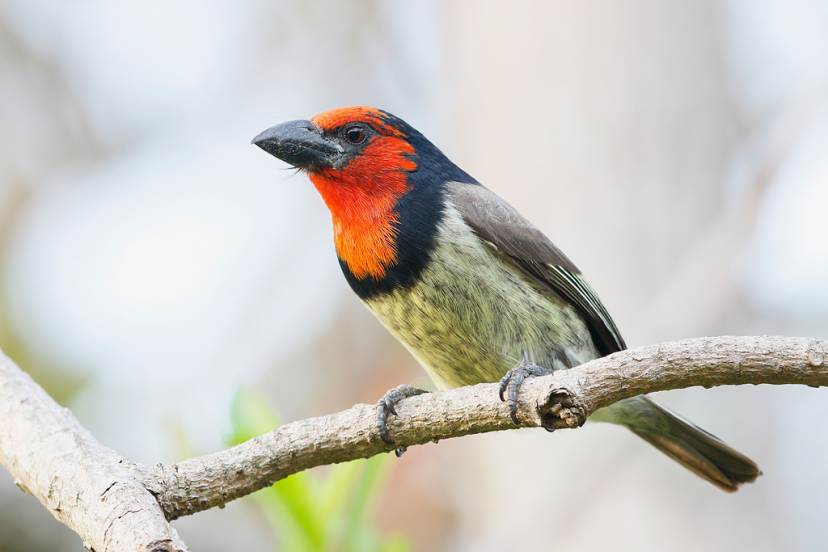 So – you see, this bird was effectively named by Aristotle and/or Aristophanes!  It IS worth looking at the derivations of the scientific names after all.  Aristotle, of course, was a great naturalist and observer of animal life though I never heard it said that he was actually a bird-watcher.  (To be honest, the Aristotelian/Aristophanean name is that of the genus – this group of barbets – and it does not follow that what Aristotle or The Other One saw was actually a Black-collared…)  With this bird, however, he probably would have heard it first before seeing it.

The sound is very distinctive and usually described as “two-puddley, two-puddley, two-puddley etc.  You can hear a nice example in the video clip indicated above: note, though, that the first sound you will hear is the very human one of an ornithologist sneezing – the Barbet clearly doesn’t much like it, either.

Do take a look at this video. You’ll first see the bird by its nest, a nice neat hole in the side of a tree, but after a while it flies up and, just before the camera finds it again, you will hear the two-puddley, two-puddley noise.  Look closely, though, when the bird comes into view: you will see that they are actually two birds rather than just one.  And even more interestingly, they are both singing: the two-puddley, two-puddley is actually a duet, made by both of them.  One does the two- and the other does the –puddley.  Although I have heard this sound all my life, it is not until today that I realised it was two birds making that sound, so well synchronized is the duet.  But you can see it quite clearly in the video.

In most species of birds it is the male who tries to woo the female with a solo performance of his snazzy song, like Romeo beneath Juliet’s window.  But in some species, the male and female sing together – in this case so well that it is hard to realise that there are two birds singing rather than just one.  As you can see, the Black-collared Barbets sing sitting close together in pairs.  But other duetting birds are not even within direct sight of each other when they sing: duetting birds often live in thick vegetation.  So the bird’s action when he or she sings (and singing often goes along with some special actions – arching of the neck, bobbing the head up and down, and so on) cannot be seen by the singing partner.  This means, surely, that their communication is purely sonic i.e. through music, rather than visual.  It is thought to be partly about bonding the pair together, which would have interested Aristotle, too, no doubt: singing together produces a common good!  They are monogamous and the pairs stay together for a number of years, so bonding is especially important.

Why do duetting birds often live in thick vegetation?  Well, perhaps one should ask, rather, why are birds living in thick vegetation more likely to be duetters?  Perhaps this kind of particularly strong bonding is more important in such environments.  Of course, the call is also importantly about territory and, when it comes to making a loud and alarming or arresting noise, it is easy to see that two is better than one – especially two such neatly synchronised birds.

Like other birds that live in holes in trees, woodpeckers and so on, these birds are commonly chosen as hosts for one the more gruesome brood-parasites such as the Greater Honeyguide which, though it has some fascinating characteristics (most notably leading humans to bees nests so that the bee-hunters will expose the bees wax on which they feed) is absolutely ruthless in killing the chicks of its hosts, such as the harmless Black-collared Barbets, in order to be the only mouth being fed in the nest.