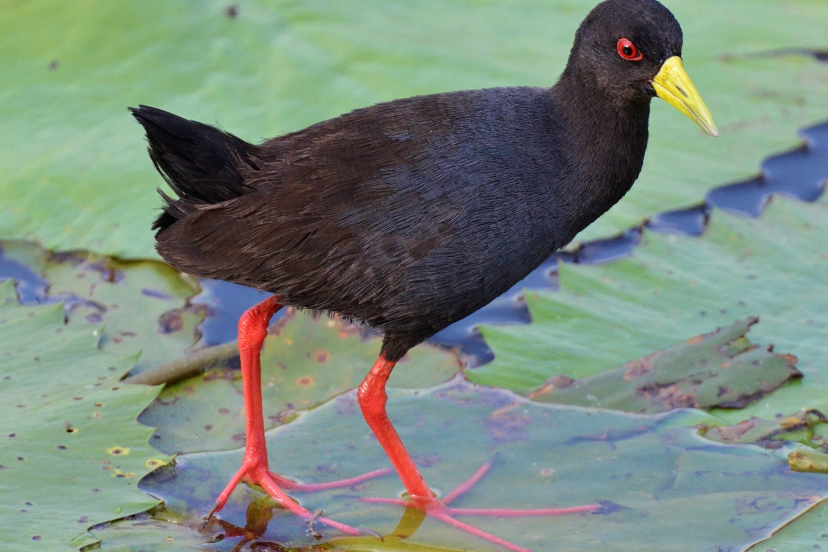 This bird is, of course, a water bird (see the enormous feet).

The Greek part of its scientific name is translated, in my book, as meaning “dark, dim or obscure bird”.  (There is no reason, I am sure, to read this as an aspersion cast upon the poor creature’s intelligence. ) It is an undeniably handsome bird.  Unlike other crakes and other skulkers and lurkers in the reeds and vegetation on the edges of ponds and streams, they say that it is also quite bold, often foraging out in the open.

The call is interesting.  It’s a duet.  Some duetting birds do it while close together: if you remember the Black-Collared Barbet No.48 of this series, I attached a video of the two birds sitting side by side as they sang.  Other duetters are skulkers, hiding in thick vegetation, so that the two singers may be unable to see each other.  What’s going on, then in that case, is a purely aural musical event, without the visual signals that other birds often give when they sing, such as bobbing their heads as you will have seen some doves do when they coo.  Duetting birds are often monogamous, and pairs stay together for a number of years.  Duetting must be part of what they do to sustain this long-term relationship, a relationship which is essential to their reproduction.

Though it is not so much a lurker in the reeds but quite bold, the Black Crake’s call is striking.  Some duets involve each partner singing whole phrases, though some of them are so short and perfectly timed that any listener who is not also a Black Crake may hardly notice that it is a duet.  The two voices of the Black Crake’s duet are very distinct types of noises.  One book describes the one as “a throaty ‘chrroo'” and the other as “hysterical, bubbling, wheezy”.  If you listen to the recording above, you can clearly hear both noises.  One would never have thought they are from the same bird: on my first listening to the first example of the song in the recording above, I took the chrroo to be an incidental irruption from another kind of bird altogether.  On hearing the second, however, the perfect timing became clear that it is one of the parts in their loving duet.  Strangely, the recording above, from the Kruger National Park in South Africa, begins with a signature medley of animal sounds, including a lion’s roar: and the unlikely similarity between the roaring lion and the chrrooing crake is what struck me.