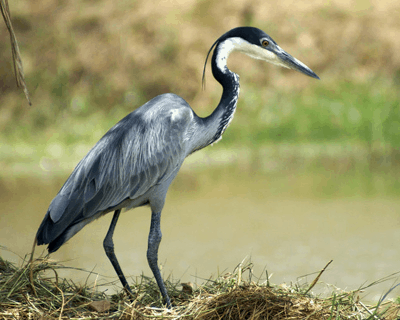 Aren’t the lines of this bird simply beautiful, especially in profile in the top picture?  The curves and hooks of the neck and breast – and that lovely wispy ‘crest’ dangling in the nape, with the eye in exactly the right place – it makes you (or me, at least) want to take a pencil and draw it.

Herons are usually thought of in connection with pools, streams or river banks; and, if I had to make a guess at the meaning of the second Shona name for this bird, nyarupani, I would say something like “the owner of the river bank” or “the one that lives on the river bank”.

It may be the biggest bird that we see around the suburbs of Harare: 92 cm tall and weighing 1.1 kg.  There was a time when, during the rainy season, a heron like this could be seen practically everyday stalking on larger lawns.  One of the downsides of “tidying up” gardens, cutting lawns and generally making things look ‘orderly’, is that the usual food for this impressive bird is less easily available.  But they can still be seen in empty plots or perched on the very top of a tall tree or a post (I saw one the other day on a tree in the neighbour’s garden, being ‘mobbed’ by crows who objected to its presence), or flying overhead, often making its loud kraak! kraak! as it rows its way carefully across the sky.

In flight herons have a very distinctive shape, as can be seen in the picture above: very broad wings, long legs and large feet trailing behind, and the sinuous neck folded back on itself in an S-shape.

They do eat fish, speared while standing in the water, but their diet also consists of mice and birds (up to dove-size) as well as frogs and snakes.

They roost at night in groups that take over large trees, known as “heronries” which sometimes include other kinds of birds, and can be tremendously noisy.  Over time, their combined droppings daub the branches and ground with chalky white.

This third picture is interesting.  Like many birds, their eyes are situated on the sides of the head; but when they angle the beak upwards, they can combine the vision from both eyes, looking at you from underneath their beaks, as it were.  If you imagine yourself a frog, hiding at the bottom of a pool and looking up at a heron towering over you with those eyes, you can see how useful this arrangement would be for the bird: eyes positioned widely apart exactly on either side of the sharp beak, precisely right for taking quick and accurate binocular aim on the prospective dinner.

For ‘stabbers’ like this, two-eyed vision is essential.  There are birds that have eyes very much in the front of the face, as we do, looking forward, especially raptors like owls and eagles, also for feeding purposes, of course.  Most birds, though, are like chickens which have to turn their heads from side to side – quizzically, it always seems to me – in order to take a good look at something.  What’s that like, I wonder, to have two different sets of images entering the brain at the same time, one from each eye?  Are they able to see both sets, at the same time, as when one divides one’s computer screen to have two different documents in view at the same time?  Can they flip back and forth from one ‘camera’, as it were, to another?  I suppose not.  And in fact my book says that all birds have both binocular and monocular vision, since the fields open to each of the individual eyes always overlap to some degree in front to provide binocular vision in that area.  It is just that some birds have a larger field of combined and therefore binocular vision, while some have a smaller.  Which makes one think – mistakenly, no doubt – that they must, somehow, see not just two but three sets of images – left, right, and left-and-right…  It all suggests new insight into the expression “the mind boggles…”