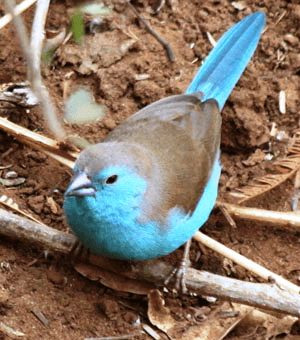 It may have been the shade of blue, not so far from that of the eggs of the Arrow-Marked Babbler (earlier in this series) that moved me to choose this lovely little bird for this week’s bird.  The female of the species has touches of blue but is not nearly as impressively coloured as the male.

You can get quite close to these tiny birds if you move slowly or stand still and allow them to continue busily foraging, even when they have seen you.  They look up at you, rather pertly, before suddenly whirring away in a flurry of wings.

They are seed-eaters, which you can see by their beaks, strong and conical, good for removing the husks from the nourishing kernels of the seeds they eat.  Some birds, like the doves and pigeons whose beaks are good for picking up but not for cracking open, eat the seeds whole and their digestion systems have to cope with the husks as well.  But these Waxbills, to judge by their beaks, are ‘huskers’.

They can move about in flocks of up to 40 birds.  I’ve only seen them in smaller groups of 10 or so, grubbing in the grass for seeds, insects, small fruits.  Like other seed-eaters, they are dependent on water and are often to be seen at the edges of sources of water and bird baths.

The Blue Waxbills nests are occasionally parasitized by another little bird (which I haven’t actually seen around here) the Shaft-tailed Whydah.  Like other parisitised birds, Waxbills have developed various strategies to combat this abuse of their hospitable nature.  One of these, apparently, is to build their nests in close proximity to a hornet’s nest, so that the commotion sometimes involved in depositing an alien egg in a Waxbill’s nest is likely to alert these angry insects.  Another very curious means is to develop distinctive markings on the inside of their chick’s mouths.  When a parent bird visits its nest with a beakful of food, the chicks instinctively open their mouths as wide as possible, cheeping insistently.

The almost luminously bright markings on the corners and inside of the mouths (or ‘gapes’) of the Waxbills help if the inside of the nest is dark.  Perhaps this was the original ‘purpose’ of the markings.  But if the pattern of the marks is distinctive to Blue Waxbill chicks, it also makes it less likely that the food will be stuffed down the throat of a non-Waxbill chick laid surreptitiously by a nest parasite.  Of course, the way round this is for the parasitic birds like the Whydah to develop their own Waxbill-like ‘gape markings’ in their own chicks so as to fool the Waxbills into feeding foreign chicks in their own nest.

Other species of birds that are the targets of nest parasites also develop gape markings like these, with their own distinctive patterns.  The extraordinary picture below shows the gape markings not of the chicks of the Shaft-Tailed Whydah which parasitises the Blue Waxbill, but of those of the similar Pin-Tailed Whydah (which I have seen here) which parasitise their own hosts, also Waxbills but not Blue Waxbills.  (What look like eyes at first are actually there to mark the corners of the mouth and guide the feeding parent.)

The Whydahs have perhaps developed these markings to mimic the distinctive design of the gape markings of the Waxbill chicks, so as to fool the Waxbill parents into feeding chicks that are not their own.  This kind of mimicking means that the Whydahs can only parasitise the nests of one particular species; and so some pairs of species of birds are locked together in this on-going competitive relationship in which the hosts continually develop ways of frustrating the attempts of the parasites, and the parasites respond by developing new ways to outwit these measures.  Of course, the moves in this intriguing competition take place only over many generations through natural selection.

Click on the link below for more on this bird.