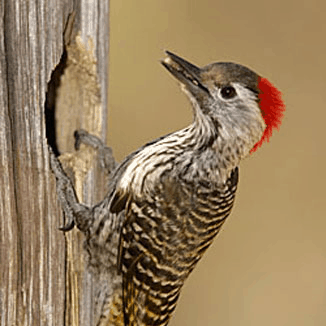 I have seen this bird working on trees in gardens.  Not infrequently, too, I hear the call – a rather raucous screaming –  which you can listen to on the site listed above.  In fact, though, my more usual experience is to hear the tap-tap-tapping first: that, too, you can listen to it on the site listed as “drumming”.  If you locate the source of the noise in a tree, you’ll see a smallish, bright and very busy bird whacking at the tree with its sturdy beak, probing under the bark of the tree looking for the insects and grubs that are its food.

I was happy once, in the Matopos, to watch one hard at work for quite a while before he was rewarded with a huge fat white caterpillar-like grub which he eventually pulled out of the hole he had excavated – it was packed full of juicy nourishment, no doubt.  That tapping, I believe, is for locating the cavities in which grubs are lying doggo, as well as for digging them out: it is also part of a system of communication.

Apparently, different species of woodpeckers have distinctive drumming patterns; one should be able to tell which kind of woodpecker just from the drumming.  And it seems that even individual birds have their own particular drumming flourishes that enable them to be recognised: some birds use the drumming as a means of communication, for example to proclaim their territiory.  As you will hear on the clip above, the Cardinal is not the most energetic drummer but rather subdued.

Woodpeckers have a number of other interesting features.  The heavy chisel-like beak, of course, but also a specially reinforced skull to protect the brain under the considerable shock involved in their hammering: they hit that tree with a lot of determination and force.  Their tongues are especially long for sticking down holes, and also coated in gluey-mucus and barbs to drag out grubs hiding in the deepest recesses of their holes.   Their tail feathers are especially strong and stiff; this is because they act as the third leg on the tripod when the bird is gripping the tree with the other two and hammering down on the bark with its beak.  Those feathers often appear worn and tattered from acting as a third leg.

A woodpecker’s foot is zygodactylic: which means it has two toes facing forwards and two facing backward instead of the more usual three-in-front-one-behind.  This of course gives them a good balanced grasp on the vertical tree trunk to provide a fulcrum for the ax-like chopping action of the beak.

In common with some other birds – hornbills are another common example – woodpeckers have a distinctive way of flying, known as “bounding flight”: they flap their wings hard to gain speed and momentum, and then close them completely for a short period, hurtling forward and arching upwards (to keep height) and downwards (to get more speed), before another bout of flapping.  This produces a sort of swooping, looping flight path.  They say – ornithologists say, that is, rather than the birds themselves – that this is a way of saving energy; and I for one am prepared to believe them.

One of my happiest bird sightings, on the wooded banks of the Shenandoah River in Virginia USA, was of the huge Pileated Woodpecker, the size of one of our Pied Crows and native of North America.  An enjoyably pointless dream I had at that time when I was in the United States was to see the even bigger Ivory-billed Woodpecker.

Birds of Eastern & Central North America, my copy still stained and warped from an involuntary immersion in the Husatonic River in Connecticut, carries the legend “Presumed extinct” under this bird: that would have been a sighting!  In its markings, the Ivory-billed is the original for the Woody the Woodpecker cartoon character.  There have been claims that it still exists in a few patches of its particular kind of woodland, but the grainy photographs did not convince the experts, I believe.  It is not that easy to distinguish from the Pileated, unless you get a good view.  Which brings me back to the one which I did see: the slightly smaller, but still impressive, Pileated Woodpecker, a picture of which follows.