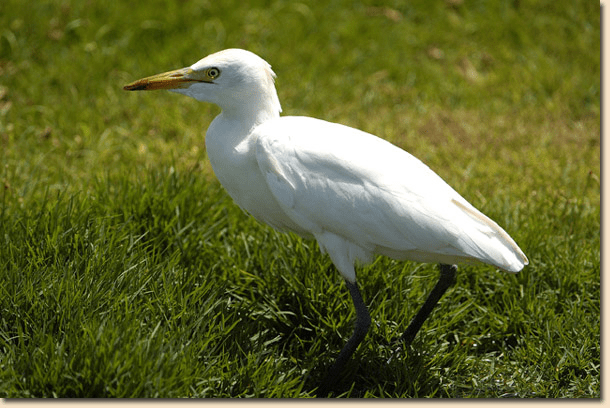 These birds are very common on and around open fields when the rains are here: and they have what the book calls “an enormous global range expansion” – they are found in many parts of the world.  To us here they seem typical of the rainy season.

They’re handsome white birds, with bright eye and yellow beak, though (as the picture below shows) they sometimes appear rather dirty.  This, however, is not mud but breeding plumage: ‘rufous’ (= reddish brown) plumes on the back of the head, back, and breast; and the legs also turn reddish.  The main breeding season is during our rainy season here.

They are monogamous (breeding pairs stay together) and very gregarious, breeding and roosting at night in big colonies in large trees such as the ones we call ‘gum trees’ (eucalyptus – mapuranga).  Building many individual nests together in the same tree makes them very conspicuous but it has advantages: there’s less chance of a predator sneaking up unseen, for example.  The colonies make a lot of white mess underneath with their droppings and raucous noise before they go to sleep.

Egret chicks are “semi-altricial”: what does this mean?  Some kinds of birds develop a great deal inside the egg before they hatch, while others do much of their developing outside the egg.  So-called “precocial” chicks spend longer inside and emerge already fledged (i.e. they have feathers), able to control their own body temperature, and ready to leave the nest immediately to find their own food.

Others, known as “altricial”, hatch after a shorter time and are naked, blind, and helplessly dependent on their parents for food, warmth, protection – everything, in fact: this requires a huge commitment of care from the parents.  Because the eggs of precocial chicks tend to be bigger to accommodate more growth inside, their mothers have to carry a greater load around with them before laying: I imagine the mothers of altricial chicks are more nimble and able to escape danger more easily.  Egret chicks are semi-altricial, i.e. somewhere in between.

The eyes of egrets, and some other birds (like chickens), are set very much in the side of their heads, rather than together in the front like ours – and some other birds like owls, for instance.  Egrets thus have a wide “monocular” field of vision on either side of their heads: their brains have to cope with separate and different information coming from each eye.  There is only a narrow strip in front of them where the vision from both eyes overlap to give “binocular” vision.  It is binocular vision that enables them (and us) to judge how far away something is from them, which is essential for hunting their food, which they do by “stalking and stabbing”.  Wherever there is a moist grassy space, especially if there are cattle, buffalo, rhino and so on, you’ll see these ‘little cattle herders’ doing their duty.  They are quite brave, some of them, and feed on the road sides in the drainage ditches.

As children we used to call them “tick birds”, suggesting that they pick and eat the ticks on the cattle; you certainly do see them standing or hitching rides on the backs of large animals.  But I can’t find it said that egrets eat ticks.  There are birds that live on ticks and other parasites of large animals such as cattle or wild antelopes in this way: this relationship with the animals is said to be “mutualism” in that the birds get food and the cattle get parasites removed.  Though they don’t eat ticks, egrets certainly do (as you can see in the photo) take all sorts of small animals: frogs, rats, even baby birds, centipedes and insects.  They often follow behind the animals looking for small creatures exposed by the heavy hooves of their charges: that’s a kind of mutualism, there.

Looking at them stalking around through the grass and reeds, intently studying the terrain for any unfortunate victims, freezing for a moment and then stabbing sharply with that fearsome beak, I have wondered what it must be like for a small frog or grasshopper to look up and see one of these monsters eyeing it for dinner.  I suppose it must feel much as we would if we were being hunted by an enormous dinosaur.  Birds, in fact, do resemble reptiles – look closely at their scaly legs – and in fact they are the “little feathered descendants” of the dinosaurs.  Some small dinosaurs did learn to fly, on leathery wings, but it was perhaps the development from reptilian scales of those marvellous things which only birds have, feathers, that enabled them to avoid (as they have at least so far) the same fate as their ancient ancestors.