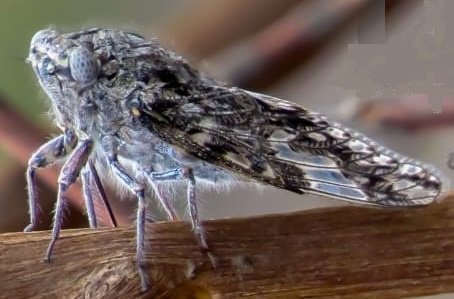 The word “cicada” (pronounced “si-car-da”) is taken directly from the Latin representation of the sound made by these insects.

The scientific name of the particular species found in Zimbabwe is Platypleura haglundi. In Shona they are called Nyenze and Nyeza (plural) in Ndebele. There is a possibility of naming confusion in their common name as cicadas are sometimes called “Christmas beetles”, apparently because they are particularly noticeable in the hot season, around Christmas. Firstly, cicadas are not “beetles” in any sense and secondly there is a common Australian beetle genus Anoplognathus also called “Christmas beetle”, large (20–30 mm long) members of the scarab family that are noisy and clumsy fliers (as are cicadas) but not in any way related.

Cicadas belong to the taxonomic order Insecta and to the Order Hemiptera, the Family Cicadidae and the Genus Platypleura.

Entymolgists (specialists on insects) refer to cicadas as “true bugs”. In English we tend to use the term “bug” very loosely for any very small creature with legs – including spiders and centipedes. A bug is strictly speaking an insect belonging to the Class Insecta, and they are characterized by three-part bodies, usually two pairs of wings, and three pairs of legs, (e.g., bees and mosquitoes). A “true bug”, however, is defined as belonging specifically to the order Hemiptera and characteristically has tough forewings and a “stylet” (a mouth shaped like a straw) that they use to suck juices from plants. Beetles are structurally different from the true bugs of the Hemiptera order, in that their mouthparts are designed for chewing, not piercing.

More than 3 000 cicada species are distributed worldwide, on every continent except Antarctica, in essentially any habitat that has deciduous trees, with the majority being in the tropics. They fall into roughly two categories: “annual” and “periodical” cicadas. “Annual” cicadas’ life cycles can vary from 1 to 9 or more years as underground nymphs but their emergence above ground as adults is not synchronized, so some members of each species appear every year. “Periodical” cicadas spend most of their lives underground and only emerge once every decade or two in a “brood” of vast numbers simultaneously. Among the most fascinating and best-known are found in North America, the 17-year cicada and the 13-year cicada (Magicicada).

There are about 60 species found in Africa. Platypleura haglundi is the medium-sized African cicada species that occurs from northern South Africa to Zimbabwe, where it is found in diverse habitats.

The adult insect, known as an imago (as opposed to a nymph or immature form of the insect) is 2 to 5 cm in total length in most species.

Cicadas have stout bodies, broad heads, short antennae, two pairs of clear-membraned wings (the front wings extend well beyond the end of the body), and prominent compound eyes set wide apart on the sides of the head. Their mouthparts form a long, sharp tube that they insert into plants to feed on sap.

The abdomen is segmented, with the hindermost segments housing the reproductive organs, and terminates in females with a large, saw-edged ovipositor, through which they lay eggs at the tip of the abdomen. This is absent in males. The abdomen is largely hollow in males and used as a resonating chamber. (We will talk below about the cicada’s extraordinary sound-producing capability below.)

Most cicadas go through a life cycle that lasts 2 to 5 years. The cicada life cycle has three stages: eggs, nymphs, and adults.

After mating, the female cuts slits into the bark of twigs or branches where she deposits her rice-shaped eggs.  (An individual female cicada can lay up to 400 eggs, divided among dozens of sites.) After six to ten weeks, young cicada nymphs hatch from their eggs. The newly hatched nymphs drop to the ground and burrow with their strong front legs. They excavate down to about 2.5meters and form chambers in close proximity to roots. Most of a cicada’s lifecycle is spent underground feeding on the watery xylem sap of roots by inserting their sucking mouthparts into the roots.

In the final nymphal stage or instar, they construct an exit tunnel to the surface and emerge above ground and climb the nearest tree.  They then moult on a nearby plant for the last time and emerge as adults.

This moulting process involves their outer “skin” or carapace splitting open lengthwise along the dorsal (top) side of the nymph to allow the new cicada to crawl out into the outside world. At first, the new adults are pale with soft, curled-up wings that are unfit for flight but after a while their bodies harden and darken and the now rigid wings can finally float the chunky two-inch bug into the air. The abandoned exoskeletons remain, still clinging to the bark of the tree.

Both male and female cicadas die within a few weeks after emerging from the soil. Although they have mouthparts and are able to consume some plant liquids for nutrition, the amount eaten is very small and the insects have a natural adult lifespan of less than two months.

Cicadas have the usual insect modes of locomotion, walking and flight, but they do not walk or run well and take to the wing to travel distances greater than a few centimetres. Cicadas are feeble jumpers, and nymphs lack the ability to jump altogether because their fore-limbs are adapted for underground life.

Adult cicadas are preyed upon by a wide variety of insects (including wasps, mantises and robber flies), reptiles, fish, birds and mammals (including, incidentally, humans). Newly hatched nymphs may be eaten by ants, and nymphs living underground are preyed on by burrowing mammals such as moles. It is important, therefore, that cicadas have strategies to evade predators.  Ecologists say, “cicadas are cryptic”.

“Crypsis” is the ability of an animal or a plant to avoid observation or detection by other animals. Many are extremely well camouflaged to evade predators such as birds that hunt by sight. Their semi-transparent forewings are coloured like tree bark and disruptively patterned (patterned with patches, mottles and speckles to correspond with the bark of their favourite food trees, not a simple, repeating pattern that would be relatively easy to distinguish) to break up their outlines. These wings are held over the body and pressed close to the surface. But when the cicada is disturbed and takes flight, it raises its forewings to expose the hind wings with rich yellow, orange red or ochre pigmentation. This sudden, unexpected flash of bright colour is often enough to confuse or deter a possible predator such as a bird or lizard.

SOUNDS MADE BY CICADAS

Some cicadas produce sounds up to 120 dB which is among the loudest of all insect-produced sounds.

The “singing” of male cicadas is produced principally using a special plate-like structure called a  “tymbal”, a pair of which lie on each side of the abdomen. The tymbal is buckled by muscular action and unbuckles rapidly on muscle relaxation, producing a clicking sound that emerges in an apparently continuous note and pitch which is the characteristic cicada sound.  The male’s abdomen is largely hollow, and acts as an echo and amplification chamber.

(This form of sound production differs completely from that in insects such as crickets and grasshoppers where sound is produced by means of “stridulation”, when different body parts are rubbed together.)

The cicadas’ amazing lifestyle has been a source of fascination since ancient times. Cicadas are famous for their penchant for disappearing entirely for many years. Several cultures in history have seen cicadas as  as powerful symbols of rebirth due to their unusual life cycle. In ancient Chinese tradition, cicadas were also venerated as high-status creatures that rulers should seek to emulate in their purity, and cicada motifs became important in imperial court wardrobes in 7th Century China.

The most comprehensive guide to Southern African cicadas is the book represent below: