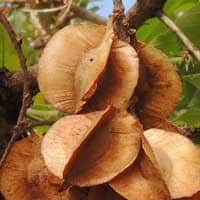 The bushwillows or combretums make up the type genus of the family Combretaceae.   The genus comprises about 370 species of trees and shrubs, roughly 300 of which are native to tropical and southern Africa. The defining characteristic of a combretum is a seed pod with four “wings”.

Combretum imberbe is the largest member of the Combretum family and often presents an imposing display, with its almost white trunk and gigantic main branches soaring above the surrounding bush.. The Herero and Ovambo people of Namibia attach special cultural and religious significance to this tree, as to them it is the great ancestor of all animals and people, and must be passed by travelers with respect.

Radiocarbon dating, done in South Africa, has shown that a leadwood tree can live 1070 years and can remain standing for years after the tree has died. Leadwood trees, alive or dead, provide good rubbing posts for generations of animals.

In Zimbabwe they occur in mixed woodland and along dry watercourses in Lowveld areas –  590m to1320 m.

The leadwood is a medium to large, semi-deciduous tree, which grows up to 20 m in height.  It has a sparse spreading canopy and is extremely slow growing. Dead branches and shoots often remain on a matured tree.

The leathery leaves are grey-green above but covered in whitish scales beneath.  They are hairless, which seems to be the origin of the name “imberbe” which means “beardless”. The leaves are eaten by kudu, impala, red lechwe, grey duiker, elephant, giraffe and the last two eat the branches as well. The presence of leadwood in some areas can indicate to farmers that the grazing is good.

Flowers appear from November to March in slender axillary spikes, creamy-yellow, and are sweetly scented.

The four-winged fruits are usually less than 1.5 cm across and pale yellowish-green even when ripe.

The common name, leadwood, refers to the heaviness of the wood. The wood is very hard and tough and burns very slowly with intense heat. Africans used this wood to make hoes before metal was discovered. The trunk was used to build enclosures and grain stamping mortars and these days it is used for furniture and sculptures.

The tree has many traditional medicinal uses.  Smoke that comes from the burning leaves is used to relieve coughs, colds and chest complaints. The flowers can also be used as a cough mixture. The leaves are believed to have magical powers. For treatment of diarrhoea and stomach pains, root decoctions are used. A combination of roots and leaves are taken against bilharzia. Root bark that is boiled in water is used for tanning leather. The gum that exudes from damaged areas on the stem is edible and forms part of the diet of the Bushmen. Leadwood ash is used as a toothpaste.

Combretum molle is found from the Arabic peninsula and throughout Africa. In Zimbabwe it is found between altitudes of  980m and 1750m in a wide variety of savanna and woodland, and is common in Brachystegia/Julbernadia woodland. It often occurs on ant-hills, in semi-evergreen thickets and is frequently associated with quartzite formations.

Combretum molle is a small to medium-sized evergreen deciduous tree that grows up to 12 or 13 meters high, with a rounded crown with drooping branches.

When young it has smooth grey bark that becomes grey-brown or almost black and rough and flaky when older.

The young leaves are a light pink or orange colour and covered in grey, velvety hairs on both sides. The name ‘molle”  means soft or with soft hairs and refers to the texture of the leaves, especially when they are young. The leaves become darker and smoother with age.

Flowers emerge from September to November and are in dense axillary spikes with a greenish yellow colour. They are strongly scented and attractive to bees and other insects. (Many people feel that the bush willow honey has an unpleasant taste.)

Its fruits are nuts about 20 mm in diameter,  surrounded by four wings (characteristic of a combretum) and are yellowish-green at first, drying to reddish-brown.

The velvet bush willow tree is important in traditional medicine. Most African people use boiled root decoction to treat constipation, headaches, stomachs, fever, dysentery and swellings, and as an anthelmintic for hookworm. The leaves are chewed, soaked in water and the juice drunk for chest complaints. It can also be used as an inhalant in a hot steam bath.

The wood is termite-proof and can be used to make fence posts, implement handles and bowls for grinding peanuts and mealies. Red fabric dyes are made from the leaves, whereas dyes made from the roots are yellow-brown.