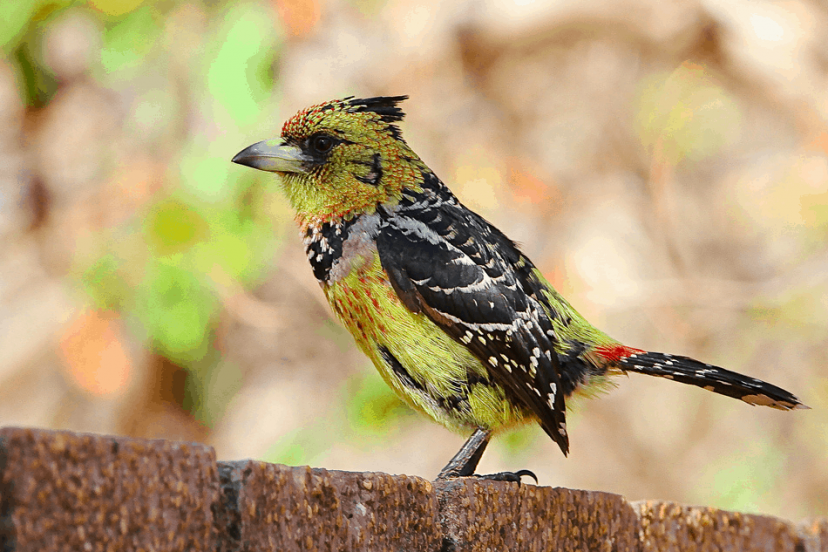 This handsome bird often, in my experience, looks rather more disheveled than the ones in these pictures, a bit more moth-eaten.  Aren’t they impressive?  The upper one is slightly less bright: that might be the female.  The lower one positively blazes with colour.  (For Shona-speaking readers: does the Shona name for this bird refer to the sun?)

There are at least two other kinds of barbet that we can see and hear on and around our campus, but this is the biggest.  And the most colourful.  My cousin once called them “Fauvist” (thinking of a school of French painters such as Matisse and Van Gogh, who worked in very strong colours: someone who didn’t like that sort of thing called them “wild beasts” or fauves in French).

These birds are omnivorous: note the heavy all-purpose beak.  They are associated with dry woodland but they have adapted well to suburbia and are quite commonly seen around here and very frequently heard.  I am sure that you will have heard their “loud and sustained unmusical trill tr-r-r-r-r-r-r-r… likened to an alarm clock with the bell removed”.  They breed in holes which they excavate on the underside of dead stumps – so once again the heavy beak comes in nice and handy (if you can pardon the mixed metaphor).

The Crested Barbet’s call is remarkable for being sustained for minutes at a time.  Birds can do this because their ‘voice box’, the syrinx, has two sources of air rather than just one (like us), one coming from each lung: so they can keep air flowing continuously, and therefore noise, without stopping for breath: while one lung breathes in the other is breathing out.  The noise comes from forcing air from the lungs and other air sacs over the vibrating membranes of the syrinx.  They control the sound by varying the openings of the syrinx and the length of the windpipe.

Amazingly, some birds are able to produce at the same time two sounds of different pitch and quality, one from each of the lungs.  No doubt many opera singers, not to mention rap artists, would like to be able to do the same.  My book describes it as an “unmusical” noise, which is not very complimentary.  But it is a sound very reminiscent of this kind of environment, and the female Crested Barbets like it very much indeed.