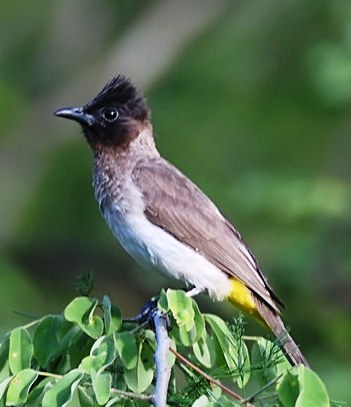 Dark-capped Bulbul, formerly known as the Black-eyed Bulbul.  (In Southern Africa , it is also often called by its Afrikaans nick-name, which is Toppie which refers to its little crest on the top of its head).

Scientific name: Genus Pycnonotus (Greek = “thick back” referring the thick layer of feathers on its back); tricolor (Latin = “three-coloured – though I actually count four: blackhead, brown back, whitish underbelly, and yellow ‘vent’ under the tail)

Shona names:  Chigwenhure, Gwenhure, Gwetura, Sakambuya.  The first three of these names, and especially the first, strike my ear as highly onomatopoeic i.e. the sound of the name imitates the call of the bird.  The English version of its call is sometimes rendered by the following “quick-chop-tooquick” or, again, “Doctor-quick, doctor-quick, be-quick be-quick”.  They both express some of the urgency in this bird’s movements.

You can hardly have avoided seeing this alert and cheeky bird: it must be the most frequently seen of all.  (Of course, this can become a reason for not seeing them at all: with birds, as with many other things, what is hardest to see is often what is right in front of our noses, ‘hidden in plain sight’ as the saying goes.)  It is about 20 cm in size, and has adapted very well to life in our suburbs.  They are ‘omnivorous’, which means they eat ‘everything’: well, not quite everything, but at least fruit, insects, nectar and even flower petals.

The Bulbul’s nests are sometimes “parasytized” by the much bigger bird, the Jacobin Cuckoo: that is to say, the cuckoo waits for a convenient moment when the Bulbul’s nest is unattended and then quickly lays her egg in there beside the Bulbul’s.  This means that she (the cuckoo) does not have to expend her energy on raising and feeding her own young, for the Bulbul will most likely not notice the difference between her own eggs and the (much bigger) foreign one.  This means that it is the Bulbul that does all the hard work of hatching, feeding and parenting.  Sometimes the intruder pushes the host’s own eggs or chicks out of the nest but continues to be fed by their parents.  Cuckoos are famous for this behaviour, though other birds do it as well.

There is a rather gruesome video of a Bulbul attacking a large spider, if you can bear to watch it, at https://www.youtube.com/watch?v=x_WrXBu-EW0

Hamerkop (from the Afrikaans for "hammer-head"); Scopus umbretta (Genus Scopus (Latin = a broom or brush, alluding to the…