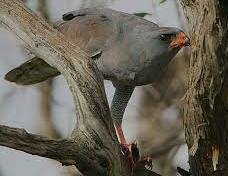 I saw this bird last year, perched on a tree in Mount Pleasant.  Actually what I saw was more like the lower picture, which is of an immature bird.

The first plumage that birds develop is often different from the plumage of adult birds – which is what the bird-books often show in their pictures (although a good book will either have a picture of an immature bird or describe it in the text).  Immature birds are for this reason quite often difficult to identify.  Immature plumage is duller and more streaked as you can see in the example given above.  I guess this gives them more camouflage during a period in their lives when they are perhaps less able to defend themselves against predators.  Presumably much camouflage works by breaking up the general shapes which are often what are most recognisable.  The irregular dark and light patches of military camouflage worn by soldiers and painted on vehicles inhibit the eye’s identification of the shape of a man – head-trunk-legs-arms – or the vehicle.  Similarly, the black and white stripes on a zebra run across the body like stripes of shadow under a tree, and deflect attention from the outline of the animal.


In fact, this immature bird was clearly visible from quite a long way away – with binoculars.  I was lucky, for without them, I would never have seen it.  No doubt he was safely assuming that most other creatures that were or might be looking at him were not using binoculars, but he did not seem to be hiding: he sat on a prominent branch and calmly surveyed the scene before him.  It was the shape and stance (very upright posture, long featherless orange legs) rather than the colour that suggested one of the Chanting Goshawks, and it seemed too big for the smaller Gabar Goshawk.  The picture I got through Google sealed it for me.  It is said to be a fairly common resident. but I think I was lucky to see it here.

The call of this bird obviously struck people as being melodious and musical.  The sample recorded above is not, however, or at least in my ears, particularly musical; but it is pleasant and distinctive enough.

Their food is various: “small mammals, birds up to the size of young guineafowl, francolins and hornbills, also snakes, lizards and insects”.  For those who like this sort of thing, here’s a picture of one eating a small snake.