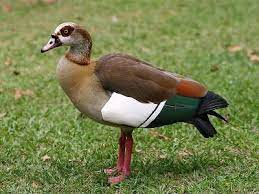 The Egyptian Goose is not, in fact, a goose (more on that later) but it is definitely Egyptian.  The picture below is taken from the beautiful illustrations of the so-called “Book of the Dead” (a better translation of the title is “Book of the coming forth into the light”). The book is an ancient compilation of spells and curses, dating back to at least the beginning of the Egyptian New Kingdom (around 1550 BCE) and in use until about 50 BCE. (You can hardly get more Egyptian than that.

These “funerary texts” were placed in the coffin or tomb of the dead.  And of course, no such text would be complete without birds!    It is thought these geese were kept as pets or guards.  Geese of different kinds, some now thought to be extinct, are also pictured with fabulous detail in Egyptian wall paintings, such as the “Egyptian Mona Lisa”, the 4,600 year old image called “Meidum Geese”.

Only, as I said, they are not geese really but ducks.  Ducks, geese: what’s the difference?  So: both ducks and geese belong to the same family, anatidae, and both are aquatic birds.  But geese are larger, with longer legs and necks (geese have 17 or more bones in their necks, ducks only 16 or less).  Ducks, especially the males, tend to be brighter in colour with iridescent feathers while geese are duller: grey, white or black.  Ducks are quieter and calmer birds than geese which are famous for their aggressive wing-flapping and honking defence of territory; nonetheless, geese are mostly herbivorous eating grasses while ducks take almost anything including small insects and fish.  Geese are great long distance flyers with strong wings; ducks less so, I guess.  Is that enough?

Egyptian Geese (ducks) are common in many parts of Africa and also, now, in other parts of the world, some with stable populations descended from escapees from zoos or farms.  They are like geese in that they are mostly vegetarian: so the distinction between ducks and geese is blurry, like many distinctions.  They are impressive birds in flight: big, heavy birds that lumber through the air rather like big transport aircraft.  Like aircraft, too, they need to build up speed on the ground, on a runway, before they can generate enough lift in their wings to get them into the air; and it takes quite a bit of flapping to keep them there.