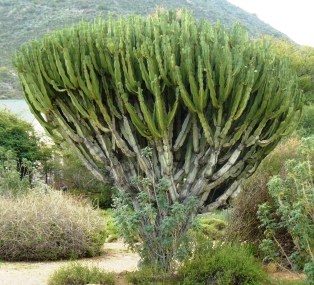 Euphorbia is the largest and most complex genera of flowering plants containing some 2000 species. Botanists have tried unsuccessfully to subdivide the genus into several smaller genera.

Euphorbias range from tiny annual plants to large and long-lived trees. They are “succulents” i.e. plants that store water in thickened stems or leaves in order to better cope with arid conditions. All have a milky, white, latex sap. Some euphorbias are very familiar, such as Poinsettia, associated in North America and Europe with Christmas.

Euphorbias from the deserts of southern Africa and Madagascar appear similar to the cacti (which are also succulents) of North and South America, so they are often incorrectly referred to as cacti.

Euphorbia ingens is a massive tree-size succulent up to 10 metres tall.

The ridges of the branches are set with short thorns. (See picture above)

The flowering parts are set at the top of the vertical branches and the flowers are small and yellow.

The flowers give rise to fruit about the size of a small plum.