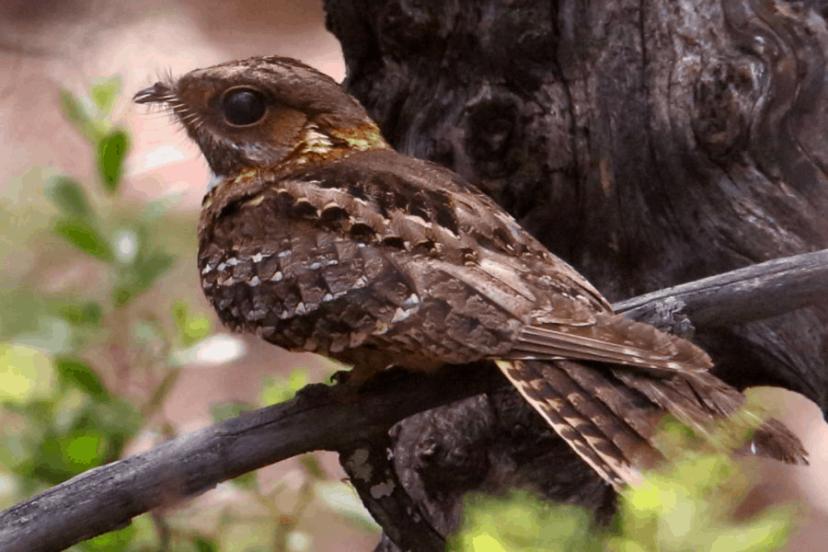 Caprimulgus (Latin = to milk a goat, from the bird’s wide-open mouth and habit of foraging around animal pens at night hunting insects attracted to livestock, cf old English name: “goatsucker).  Pectoralis (Greek = of the breast)

NIGHT TIME – Have you heard this bird?

DAY TIME – Have you seen this bird?

You are most likely to have seen this bird as two glowing eyes in the middle of the road at night: they often sit, for some reason, in the road and then fly up suddenly just before your vehicle reaches them.  Apart from this, it is extremely unlikely that you have seen this bird.  It is nocturnal and lays up quietly on the ground during the day, when it is extremely hard to see.  I promise you that there is a bird facing directly towards the camera, very slightly lower and to the left of the centre of the picture; you can make out two eyes (closed) facing you and the beak, with the rest of the body and tail behind.

At the bottom of this post you will find the same photo on which I have marked the bird with a double red outline: look at that, then see if you can find it in the picture above.  I have once spotted one on the ground, but usually you just get a fright when it suddenly erupts from almost under your feet: it stays dead still until the last moment.  If you were lucky enough to see one out in the open during the day, it looks like this.

Notice the large eye for collecting as much light as possible for their nocturnal hunting: those eyes reflect the light of a torch and I have seen them, twin spots of reflected light dancing around in the blackness of night, catching insects around a light.  Note also the bristles on the side of the mouth which are thought to help with feeding by ‘guiding’ the bird to catch flying insects into the mouth.  These birds often gather their food on the wing, and can open their mouths extraordinarily wide to catch as many as possible.  The point of the colours needs no explanation, of course.  The camouflage is very effective.

At night, and especially early in the morning (that is when I am hearing it these days), you can hear the clear and very distinctive call very frequently.  It is usually said that the call sounds like “Good Lord deliver us”.  It is quite loud and presumably gets its normal English name because the sound “jars” the night, though it isn’t, as a matter of fact, very jarring at all, just a little repetitive.  As mentioned above, the old English name, rather less attractive but perhaps more picturesque, is “Goat Sucker”, and presumably that is because people thought, or liked to think, that it secretly sucked the milk out of their goats at night.  Its food, though, is nocturnal flying insects.

It is here, I promise you!  Look inside the red lines….  It can help to increase the size of the picture.