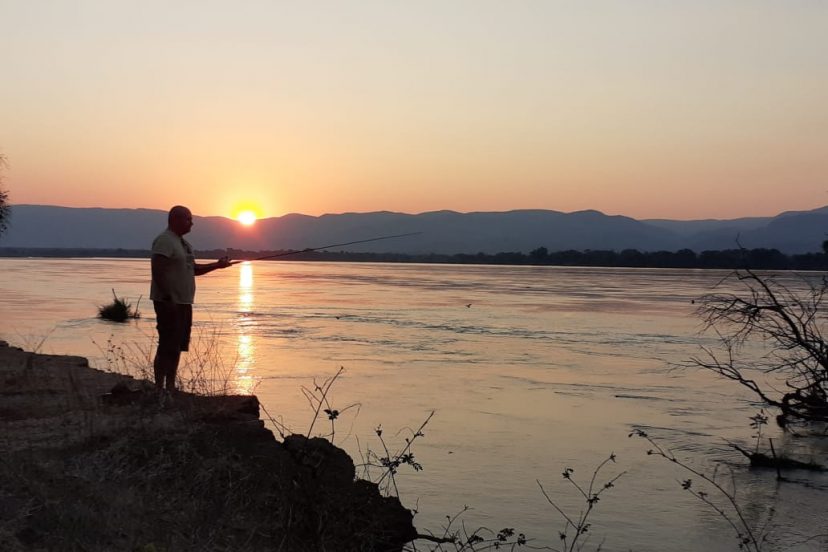 (Basic information in this post is taken from “Fly Fishing & Angling at Victoria Falls – https://www.siyabonga.com/explore-victoria-falls and augmented)

The Victoria Falls create an important barrier to fish migration and there are, therefore, differences in the fish populations above and below the Falls. Also, the Zambezi is a river of many different habitats including churning rapids, open flowing sections, narrow shaded channels, quiet backwaters and stagnant pools.

These different habitats result in a distinct separation of species determined by their specific ecological preference. For example, consider two predatory fish: tiger fish prefer well-oxygenated waters and will be found in open waters or below rapids where they actively hunt their prey, while the African pike, which is more tolerant of lower oxygen levels, prefers quieter backwaters where it lies in wait to ambush its prey.

One of Africa’s most famous game fish and the species most closely associated with the Zambezi; sought by anglers because of its fierce nature .

Among the international fishing community, Tiger fish are revered as one of the world’s most prized freshwater fish. This ferocious species of game fish is famous for its immense power, unbelievable stamina, and frightening jaws. Tiger fish are considered some of the most feisty and ferocious fighting freshwater predators around. The current record from the river is a 15,5kg specimen

It is a hostile predator that will eat almost anything including various birds (it is known to swim near heronries hoping to prey on fledglings that may fall out of the nest), juvenile crocodile, snails, as well as carcasses floating down the river (thereby providing a valuable cleaning service). They prefer the deeper water, are usually be found in a river’s mainstream, and become increasingly active at night.

This species was introduced into the Zambezi in the 1960s from further north in Africa and is one of the most popular angling fish on the Zambezi. It favours quiet water near rocks or river banks. The largest caught was reputedly 6kg but most are about 3kg in weight. This predatory bream resembles the bass in appearance and behavior. It launches an ambush to hunt down its prey of smaller fish and sand-dwelling invertebrates.

These fish are much smaller than the yellow-bellied bream. They are widely distributed along the Zambezi. They feed on algae, crustaceans, insects and plants and play an important role in controlling the growth of aquatic plants. They are found in schools, in quiet backwaters of well vegetated flood plains, rivers and swamps. The species has a high temperature tolerance (8 – 41°C) and also withstands brackish (salty) water.
.

These are the true scavengers of the Zambezi and an important species in maintaining the ecological balance of the river. They are one of the few fish species that can share open water with the tiger fish, probably because of their formidable scales which can cut easily. These fish are loved by cormorants. Of the five species in the river, three are found above the Falls and two below.

This fish is usually restricted to lagoons and backwaters which offer some protection against the tiger fish. They feed on several species of smaller fish and are primarily diurnal ambush predators, hiding out in dense vegetation and lunging suddenly to seize prey. Fishermen consider the pike to be good game fish with a reputation as a fighter. The largest specimen found in the upper Zambezi was 1,4kg. . The most striking feature of H. odoe is its dentition. Both upper and lower jaws are filled with sharp pointed teeth, but the lower jaw has two rows while the upper only has one. There are also two large canines in each jaw.

Malapterurus electricus, the electric catfish, has a broad distribution on the African continent but is found in the Zambezi only below the Falls.. The species is notable for its electric organ, capable of generating an electrical discharge of between 350 and 450 volts and used for prey capture and defense. The electric organ discharge can be uncomfortable for humans but is not fatal. Many a novice angler has received a forceful shock while landing this fish.

Snakes Shedding Their Skins (or Moulting or Sloughing)

All snakes shed their skin, regularly. In this article we will discuss why and how they…