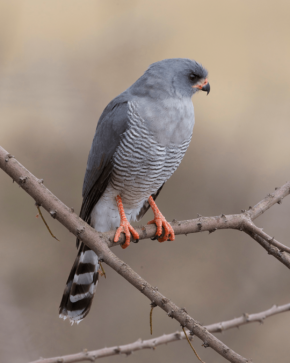 This is the first raptor (bird of prey) that I’ve featured in this series: notice the very sharp beak and strong talons on its feet for catching and eating other animals.  The book says they eat mainly birds, but also rodents, bats, reptiles and insects.  The wonderful photo shows one attempting to catch another bird in the air, but I have only seen them pouncing suddenly on birds perched on branches and killing them on the ground by squeezing them and piercing them with their dangerous talons.

It is not a big bird at 32cm, a little bigger than the Cape Turtle Dove which is only 27cm.  You may have seen it and taken it to be a dove as the overall colour is similar.  On the perch they sit quite upright; the bands across the tail and the longish narrow tail in flight are also helpful clues.  Gabar Goshawks are quite common residents in Harare and seem to do well in suburbs.  I should think I see or hear one at least once a day, as the call is distinctive.  When you see it flying you can easily mistake it for a dove.  Perched in a tree, however, its red legs and feet and cere (the skin around the base of the beak) and the barred chest and belly can be seen clearly.

They make their nests out of sticks and, interestingly, the nest usually incorporates a colony of a particular type of social spiders which surrounds the nest with its web: presumably this helps to hold the nest together.  Thus, it seems, two species cooperate helpfully.

Another interesting thing about this bird is that it is quite often found in a black or “melanistic” (see the picture above).  Melanism is known to occur more regularly in the Gabar Goshawk than in other species of birds.  It is caused by an excess of the dark pigment in their feathers making the birds look dark all over.  10 or 15 years ago there was one, or perhaps a number, of melanistic Gabar Goshawks residing around here, and I remember seeing it regularly; but no longer. I don’t know if this colour affects its chances of surviving or not: does the bird’s colour make it more visible to its prey and so less effective in hunting?  I don’t know, but the one I used to see around here seemed to manage alright.  Melanism is one of a number ‘feather aberrations’ causing untypical colours in birds.

Albinism occurs in birds as in other animals, including mammals such as ourselves, but rarely: I have never seen it.  For birds it is a genetic inability to produce ‘melanin’, the dark pigment that colours feathers dark brown or black.  Albino birds are born with white feathers and red or pink eyes, legs and beaks, but they don’t generally live more than a few days and are rarely seen.  Such birds are at a serious disadvantage.   For as well as colouring them black or dark brown, melanin also makes the feathers stronger, which is why the main wing feathers that are important for flight and need to be especially strong are dark or even black on most birds: black feathers are stronger than lighter coloured ones.

Another form of colour aberration in birds is leucism which is a partial loss of pigment from the bird’s feathers, making them lighter than the normal birds, or even quite white.  It is not albinism and, unlike albinism, it does not cause the red eyes and pink legs: leucistic birds seem to survive well enough; the white colour, though, must make them more visible to predators and prey.