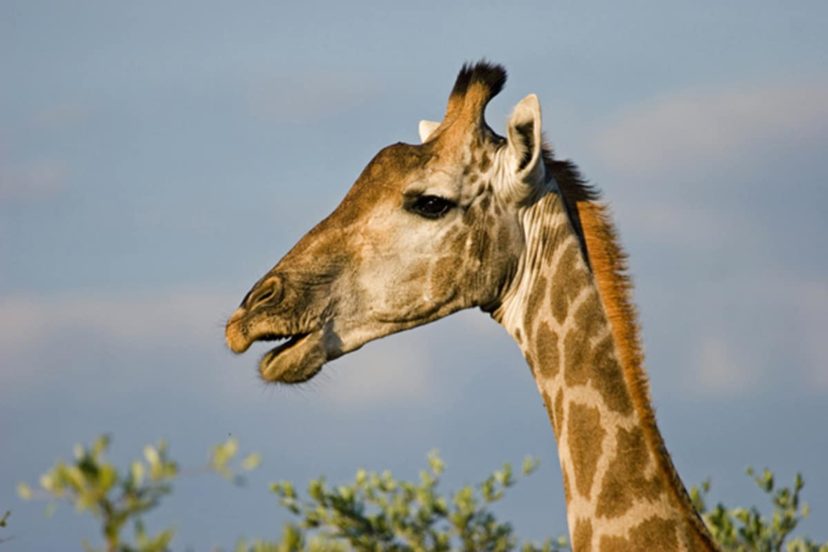 The unique physical appearance of the giraffe represents the coming together of a variety of adaptations that make the giraffe perfectly fitted for the niche they occupy in the environment. Let us look at some of these adaptations, starting with height, as that is the most obvious characteristic of a giraffe.

The giraffe is the tallest animal in the world, with males standing about 3m (10′) at the shoulder and 5m (16′) at the head. The largest giraffe bull recorded was almost 7m tall (20′). This great height comes with a great deal of bulk and giraffe bulls weigh well over one tonne (1200kg/2600lb average).

The great height of a giraffe gives it access to food from the tops of trees that no other browsing herbivores are competing for, because they cannot reach that high. Giraffe feed from 1.6 m to at least 5 m above the ground.  Even within the species there is a further division. Females tend to browse on the outside portions of trees with their heads level. The males stick their heads into the crowns of trees with their mouths pointing upwards to browse.

2. Eyesight and other senses

Giraffe have the largest eyes of any land mammal and apparently they are able to see in colour (most animals see in monochrome – bulls are not in fact excited by the colour red, just by having a cloth flapped in their faces). Giraffes have good eyesight and this is their primary sense for detecting danger. Obviously also their height gives them a good vantage point from which to check visually for danger. They have the characteristic prey eyes on the sides of the skull to give them almost 360 ° vision. Their sense of hearing is also acute. It appears that their sense of smell is only moderate, and in any case the head is above most general ground wind currents. Nevertheless, giraffe always feed moving into the wind and enough scent reaches them to provide clues to possible danger.

The giraffe’s upper lip is prehensile and used for gathering in vegetation when foraging. This process is assisted by the tongue which is up to 20 inches (50 cms) long, extending the reach of the already tall animal, and is purple/black coloured by melanin to help protect the tongue during frequent sun-exposure.  The lips, tongue and inside of the mouth are covered in papillae to protect against thorns and a tough layer protects the palate. Giraffes have a very sticky, almost rubbery, saliva, which provides further protection against their thorny diet.

This fabulously adapted set of mouth parts is set in a very narrow muzzle which facilitates poking the head in amongst thorny branches. The rubbery nostrils can be clamped shut as protection against ants or sand storms.

The giraffe achieves part of its great height by having the longest neck of any animal. It is interesting to note that they only have seven vertebrae in their necks (exactly the same number as humans) but the elongation of the neck is caused by the lengthening of the cervical vertebrae and not by the addition of more vertebrae and largely takes place after birth, as giraffe mothers would have a difficult time giving birth to young with the same neck proportions as adults.

As you can imagine the giraffe’s neck is very heavy and it requires a special adaptation to carry such a long neck upright. The vertebrae in the vicinity of the giraffe’s shoulders have vertical extensions supporting a very large ligament called the “nucha ligament” which runs from the back of the skull to the base of the tail and functions like a giant elastic band pulling the neck back over the front legs and reducing the strain of carrying the hugely heavy neck.

7. Valves in the neck

The giraffe’s neck has valves which regulate blood pressure and flow because the heart alone is not strong enough to pump all the way up the 2,5 m to the head. Powerfully muscular neck arteries function to support the heart to increase blood pressure in the neck but a complex network of veins at the base of the brain lowers blood pressure and regulates the flow of blood into the brain. These vessels expand when the giraffe puts its head down to drink allowing a controlled amount of blood into the head and contract when the head is raised again – so that the blood does not rapidly leave the brain and cause a blackout.

The giraffe’s heart is situated relatively high in the chest and right forward against the sternum compared to other animals. It needs a massive heart (weighing about 24 lb/11 kgs and about 2 feet/50 cm long, about the size of a 4 liter/1 gallon container) to circulate blood for many meters from ground level to head level and back.  The giraffe has the highest blood pressure of any land mammal (double that of humans) and the heart beats at about 150 beats per minute and  pumps a bathtub’s worth of blood every 3 minutes. At rest the giraffe takes 20 breaths per minute (humans take 12 breaths per minute and elephants 10 breaths per minute.)

The giraffe’s very high blood pressure calls for particularly strong and thick skin, especially in the chest and front legs, to control blood pressure. (Larger veins are situated deep within the legs and the veins are very fine nearer the surface.

The obvious function of the giraffe’s skin pattern (which is unique to each animal, like our finger prints) is for camouflage and it is remarkable how the broken pattern makes it possible for such a huge animal to blend with its background and only really become visible when it moves.

A less obvious function of the skin pattern is for temperature regulation. Around each dark patch is a vein leading into branching finer blood vessels just under the skin in the middle of the patch, emitting heat as the blood flows through them.

Obviously part of the giraffe’s height is obtained by having very long legs. Its very sturdy front legs, supporting the massive neck, are longer than the back legs, so the back slopes quite sharply towards the tail.

Giraffes  are surprisingly fast when they decide to run, up to 50 kms (35 mph) an hour, but on the whole when threatened they tend to fight rather than flight. They defend themselves with horse-like forward kicks with their front legs. A single blow from the front hooves can kill or cripple a lion.

For more information on the giraffe have a look at Giraffe: Part 2 where we talk about the scientific classification of giraffes, their distribution, habitat and social organisation.