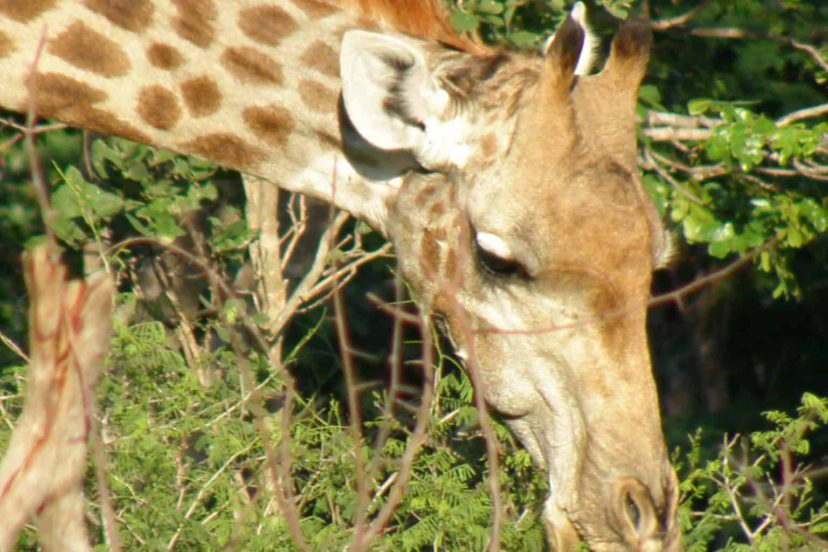 The name “giraffe” has its origins in Arabic xirapha , meaning ‘one who walks swiftly”. The first European explorers to see giraffes named them ‘Camelopard’ derived from the ancient Greek for camel and leopard, referring to their camel-like shape and their leopard-like colouring. This is the basis for the scientific name camelopardalis.

It was once thought that there was a single species of giraffe, with between ﬁve to nine sub-species. Taxonomists are now clear that giraffes should be split into four separate species, namely

Giraffe have a wide distribution throughout Africa south of the Sahara. These days this distribution is somewhat fragmented due to massive habitat loss and increasing human pressure including giraffe being hunted for their very tough hides and 2.5 m ( 8’) tails, desirable as fly switches. (Their meat, especially of the males, is generally not popular as it is very strongly flavoured, but their bone marrow is highly prized by San bushmen.) There has been a particularly rapid decline in giraffe numbers during the past couple of decades, from an estimated 140 000 to around 90 000 today – what some scientists call a ‘silent extinction’.

Male giraffes are bigger are taller and heavier than the females and their coats tend to be darker. Both genders have knobby “horns” or, more correctly, ossicones, which are lumps of cartilage covered in skin and hair. The ossicones are thought to have a role in thermoregulation (maintaining a relatively even core body temperature, regardless of outside temperatures) and are also used in combat between males. The ossicones of females and young giraffe are thin and display tufts of hair on top, whereas those of adult males end in knobs and tend to be bald on top. Also, a median lump, which is more prominent in males, emerges at the front of the skull. Mature males’ coats are also considerably darker than the females and the coats of both darken with age.

The habitat of the giraffe is dry savannah, grasslands or open woodlands. They will move into wooded areas with denser vegetation in search of food. Giraffes eat between 50-70 kgs a day, from up to 100 different plant species but massively favouring the thorny acacia type trees and the combretum family. They eat every part of the plant – twigs, buds, flowers, leaves and fruit. They spend a high proportion of the day 15 to 20 hours feeding (75% of day & 30% of night). Giraffe mainly feed during the ﬁrst and last hours of daytime, and between these hours, they mostly stand and ruminate (chew the cud). Rumination is the dominant activity during the night, too.

The trees the giraffe eat are often far apart and their herds tend to wander in a loose formation when foraging.

The way that giraffes browse actually stimulates new growth, unlike elephant browsing which tends to be quite destructive.

Whilst they may eat a lot, giraffes do not drink much water. This is because they get most of their water from their leafy acacia diet. They can be found around water holes at some stage during the day though they only need to drink once every few days and they will consume an average of 10 gallons on days that they drink.  They can however survive independent of any surface water and are found deep in the Kalahari and Namib Deserts.

The giraffe is physically vulnerable when drinking  because of the challenge of bringing their heads down to water level to drink. This is achieved by splaying their front legs far apart or bending them at the “knee” (which is strictly speaking a wrist).

The giraffe is not territorial. They have large home ranges of about 120 square kms (75 square miles). They live in loosely formed herds with no obvious leader or apparent social structure.  The individuals in the herds are often changing. Their need to spend a large portion of their day foraging for food from separate trees makes them more independent than most herd animals.

Females tend to associate with other females when they have calf groups, effectively providing each other with defence and shared vigilance against predators. The calves will move and play with each other, forming durable peer groups. Males will stay with their maternal herd until around the age of 3, when they may move to another herd consisting of bachelors or become solitary. The males move great distances between female herds and only stay with them relatively short periods.

Although generally non-vocal, giraffe do communicate using various sounds. During courtship, males emit loud coughs and make a coughing sound as a warning. While females call their young by bellowing. Calves will emit snorts, bleats and mewing sounds. Giraffe apparently also snore, hiss, moan, grunt and make ﬂute-like sounds. They are thought to communicate over long distances using infrasound.  During the night, giraffe appear to hum to each other above the infrasound range for purposes which are unclear.

The typical lifespan of a giraffe is 20 to 25 years.  Sexual maturity is reached around the age of 3 or 4 and a cow can conceive when she is 4 years old. Males start competing to mate at the age of 7 though seldom successfully breed until the age 8 or older. Older bulls rarely fight about mating rights as their rank is established in the herd but younger males in the bachelor herds  have regular contests to prove their strength and rank through a form of fighting called “necking”, throwing their heavy heads and necks at one another. Necking duels can last more than half an hour, but most ﬁghts do not lead to serious injury. This behavior is described as having a rhythmical grace due to the great length of the giraffes’ necks and the fact that the combatants seem to take turns in delivering blows. Though the blows can be heard from quite a distance a giraffe is seldom injured in these contests. The weaker bull just gives up and wanders away and the stronger bull achieves higher rank in the herd.

Giraffe breed all year round, the males coming and going regularly. The gestation period of a single calf is about 14 to 15 months and at any one time at least one of the females in the herd will be pregnant.

Female giraffes often return to where they were born to give birth. Once there, the females give birth whilst standing up, avoiding the vulnerability involved in their lying down. Their calves drop about 1.5 meters to the ground. Within 30 minutes the calf is standing and a few hours later they are able to run with their mothers. The newborn calf hides for a good part of the day and most of the night during the first 5 to 7 days of its life. The cow guards her calf, protecting it from predators but she will leave it in a crèche (a group of young calves guarded by one or more cows) when she needs to find water or forage for food.

Calves are approximately 6′ tall when born and they can grow extremely rapidly. When the calves reach 2 months of age they are eating leaves and they near independence by 6 months of age.

There is usually a break of about 1 to 1.5 years between calves.

Apart from humans the only predator an adult giraffe has is the lion.  Giraffes have very powerful legs which they use very effectively to defend themselves. A strategic kick by a giraffe to the skull of a lion can kill it. Taking a giraffe (usually a solitary bull) is a skill perfected by some lions and handed down through the pride. Lions invariably hamstring a giraffe before climbing onto its back to kill it. This necessitates total surprise, and is the reason for the loose herd formations adopted by female giraffe herds, so that there are numerous eyes out for possible danger.

Due to their smaller size young giraffes have more predators – lions, leopards and hyenas are always on the lookout for a calf that has strayed too far to the outskirts of the herd. Only a quarter of giraffe calves survive their first year of life.

To reduce vulnerability to predators giraffes spend most of their lives standing up; they even sleep and give birth standing up.

The average time spent in sleep for a giraffe is 5 to 30 minutes per day, mostly achieved in quick naps that may last only a minute or two at a time, while standing up.