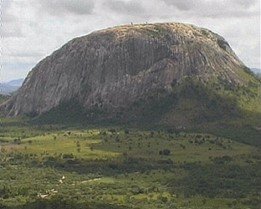 Places like Matopos, south of Bulawayo, and the Chinamora area, north of Harare, are associated iconic, granite-based landscapes. These landscapes are dominated by huge, rounded mountains of solid granite interspersed with wide, flat valleys and kopjes topped with piles of balancing rocks. These features result from volcanic intrusions from at least a couple of billion years ago. Since that time the land surface has eroded away leaving the resistant granite exposed. Below are some examples from around the country.

Hill, mountain, dwala, dombo, inselberg, bornhardt, whaleback, kopje – there are many words to describe a physical feature that is higher than the surrounding countryside. The word “hill” in a European context is not really adequate for describing the physical features of places like the Matobo Hills. The huge granite dwalas, (as the Ndebele call them) or dombos (as the Shona call them) are interspersed with thousands of separate castellated rock structures which are the eroded remnants of earlier dwalas, called “ntaba” in Ndebele or “kopjes” by the European population. (A kopje is the Afrikaans name for the smaller, isolated rock structures found throughout South Africa. It literally means “small head” but was quickly utilised by English-speaking settlers to describe almost anything less than a range of interlinked hills or proper mountains.)

Before we set off in earnest to explore granite-based landscapes, let us look at some terms that we are going to be using in this article for referring to geology and landscape formation.

For the most part in what follows I will just use the term ‘dwala’ for the huge granite domes.

Zimbabwe is situated in a region of some of the most ancient rock on the surface of the earth, mostly so ancient that it does not even have any fossils in it because it was formed before any life forms had occurred on the earth. When the planet was still largely a super-hot ball of molten magma, out-pourinqs of lava were constantly erupting over the southern African land mass. The lava cooled and crystallised, forming a rock layer about 10 kilometers thick that is known as the greenstone schist belt. Later volcanic activity deep within the earth caused bodies of plutonic granites to be formed deep below this layer and these granite bodies were forced upward into the greenstone layer.

Given the nature of the plasticity of the older rock above and the differing pressure zones in the older rock, the new lava was squeezed into dome-like shapes (called batholiths) many thousands of meters below the surface. Subsequently most of the enormous tonnage of ancient greenstone rock and its constituent minerals was eroded away, much of it carried southwards to settle in a huge inland sea which after further geological processes and metamorphosis became the sedimentary gold deposits of the Witwatersrand and the Orange Free State.

The millennia of erosion eventually exposed the granite domes or batholiths to view millions of years after they were formed and essentially revealed the landscape as we see today.

The present landscape is determined by the alignment and concentration of fractures and joints within the granite rock that was laid down millions of years ago. Where these joints are concentrated the decay process in the granite has been relatively rapid and has broken down the rock completely into flat lowland areas of soil, called “etchplains”. The more solid, un-fractured rock resisted decay and remains as higher areas, e.g. dwalas (or inselberg in the photo).

In the process of the original lava intrusion sometimes pieces of the bedrock were torn off and became entombed in the new granite. These are called inclusions or xenoliths. You can see them appearing as periodic lumps of usually darker rock in the granite.

You can also see now and then bands of later intrusion of other types of rock in the otherwise uniform granite. These can vary from faint parallel dark lines in the rock to wide intrusions of coarse quartz-feldspar pegmatite.

The Processes that Shaped the Granite

The most important factor bringing about the decay of the rock is chemical. Acidified rainwater causes rock to decompose into a softer material which is easily eroded. This chemical process happens deep underground for millennia. When the mantle of soil has been worn away it becomes possible to see the effects of the chemical decay of rock.

Below are some examples of the features caused by chemical weathering

Gnammas – shallow circular depressions caused by decay of locally weakened rock where water has been standing in hollows. Though the water is not permanent its seasonal presence decays the rocks over millennia and the hollows enlarge – and eventually coalesce, forming the hummocky surface of the rock surface.

Weathering hollows – hemispherical depressions in the rock that are much larger than gnammas and happen where there was an initial weakness in the rock, a local patch of differing chemical properties or a concentration of fracturing. Water concentrating in this area causes faster decay than in the surrounding areas and eventually a sand of decayed material becomes a soil that can sustain vegetation and vegetative mats develop that hasten the decay with a combination of vegetative acids and holding water in position on the rock for long periods.

Rills – Where the slopes and hollows of a rock surface correspond with a long area of weakness in the rock the chemical erosion by water can set up a long gully with raised edges that drains water from gnammas along a line of weakness. The raised edges are formed from re-deposited minerals along the “stream” edges.

Rock pavements – slabs of granite often with upturned rims and lower centers. This is where an outer layer of rock has broken away along networks of quartz which have cut through the granite after it was extruded. The resistant quartz on the edges of the slabs forms the raised rims. (These slabs are considered desirable with acquisitive gardeners and these areas are becoming rare.)

Caves – hollows formed in the giant ‘whaleback” of rock where erosion has undercut along a large area of weakness. Over the ages such caves have formed natural shelters from the elements and from enemies to groups of people and in Zimbabwe are usually decorated with ancient rock ar

Individual rocks or piles of rocks – standing on the solid dwalas, left behind by the process of weathering attacking lines of weakness around the remaining rock and eroding away the surrounding rock. The rock that looks a bit like a whale shown below is one of the most famous features of Domboshava. It is a traditional place of prayer and communication with the ancestors and offerings of food for the ancestors were traditionally left at this spot.

Other Processes Shaping the Rock

We have been looking at features of granite that are caused by the chemical processes. The rock is also affected by other forces.

Exfoliation
Once the rock is exposed, sheets of varying thicknesses break away along successively deeper fault lines. These fault lines cause horizontal layers to peel off the dwala somewhat like the layers of an onion. The expression ‘onion skin peeling’ refers to the way rings of onion peel away from one another and the slipping of layers of dwala as the effects of differential heating and cooling cause cracks to develop between the surface rock and the area 20 cms to 1 meter or more immediately beneath the surface.

When plants find enough soil to get a hold on a hollow in the rock then roots can begin to lever apart chunks of rock, slowly but with great force.

Talus slopes
In giant granite mountains there is a continual wearing process. Over millennia pieces of rock are loosened, break up and slip to the bottom of the steep slope where they begin to build up a more gentle slope of broken material, sand and eventually soil. This slope is called a talus slope.

The Interaction of Dwalas and Rainwater Run-off

Firstly, when rain falls over an area of giant granite features it is channeled down the slopes and concentrates in the valleys, significantly raising the average rainfall in the vegetated areas between the mountains.

Secondly, the dwalas, which appear to be individual structures, are all in fact interlinked below the present surface as solid granite basins. Water penetrating down through the soil and sub-soil eventually comes into contact with the impervious level and then, following the dip of underground rock, will re-emerge as a spring or vlei (or seasonal swamp) where it is forced to the surface. These vleis are vital to the ecological balance within several kilometers of them. In addition to supplying water for humans and animals, they support a fragile system of sedges, reeds and bulbous plants such as members of the orchid and lily families. Downstream of the vlei, water-loving plants and trees exist along the emerging stream banks.

Huge granite outcrops are a characteristic part of many places in Zimbabwe. They make for visually impressive scenery but they also go together with characteristic micro-climates and vegetation, and with particular wildlife (like dassies) and bird life (like the African spotted creeper).

This article is taken from the site https://bigthink.com/strange-maps/kazungula-bridge Big ideas.Once a week. Subscribe to our weekly…