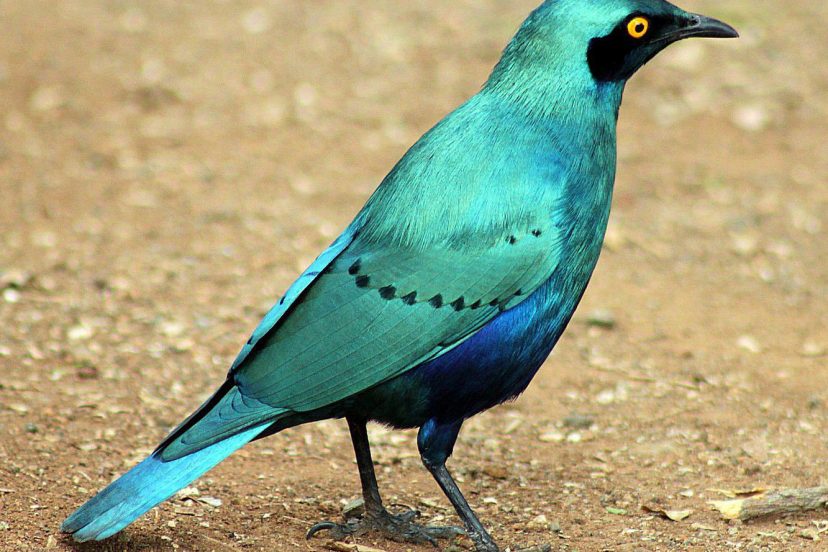 One has to have several pictures of this bird because the same bird can look very different, at least in colour, depending on the light and the angle.  More about that ‘iridescence’ later.  This is quite a common bird around our part of town, now. I don’t remember it being like that when I was young when I looked forward to seeing the flash of blue of these beautiful birds if I was going to Chishawasha or somewhere else just outside of town.  Whether or not I am right about that, it is certainly true that they can frequently be seen in Harare now.They are often to be found foraging on the ground, especially on lawns, where they are hard to miss, with that brilliant blue ‘colour’, at least from some angles, and a very bright yellow-orange eye.  From other angles, they are a deep dark green which is, I think, equally beautiful.  From yet other angles they just look black.

Interestingly, the photos available on the internet – there are hundreds of very nice pictures – almost always show them as that brilliant blue which we see in the first picture.  It is as if the photographers assume that that lovely blue is the bird’s ‘real’ colour – or perhaps it’s that they wish it were.  In fact, though, these birds are neither blue nor green nor black.  That is to say, their feathers are actually not any of those colours and we are not looking at pigments here.  What we see as blue on these birds is the effect of the light being split into different colours by the translucent keratin, the tough protein out of which feathers – but also the beak, the claws and the scales on legs and feet – are made.  The birds are covered in myriads of prisms, all coordinated to separate and remix light waves of different wave-lengths, in order to create precisely that marvelous range of hues.

When I put it like that, it sounds like a modern piece of high-tech installation art, fit for a contemporary art museum. In fact, would that not be a glorious thing to do – to replicate in a gallery the shifting colours of this bird?  It seems almost too beautiful to have come about by accident.  But it is, we must believe, the result of evolutionary processes over millennia of generations, of individual female birds finding individual male birds – the ones which happen to have colouring that little bit more splendid than their slightly duller competitors – to be that little bit more attractive as potential mates and potential fathers of their chicks.  That amazing process is in itself one of those things that are, as Christopher Smart said about his cat in that wonderful poem, “My Cat Jeffrey” (Jubilate  Agno), “good to think on”.  It does you good just to think about it.

If you listen to the recording of the call, you’ll hear what a great variety of noises these birds make.  Like other birds that live, feed and travel in large flocks, they are constantly conversing with each other, or rather keeping the group together via these calls.  I do sometimes hear the jumbled sounds in that recording, but it is more often the rather questioning ‘squeer’ noise (given strangely as ‘wraanh’ in one of my books, a rendering that I find strikingly unhelpful) that I hear: just a ‘squeer’ issued, picked up and repeated by others in the group.  It’s useful because the different kinds of ‘glossy starlings’ can look much alike: and it is only the Greater Blue-Eared Starling that makes that nose.  Squeer!  Wraanh?