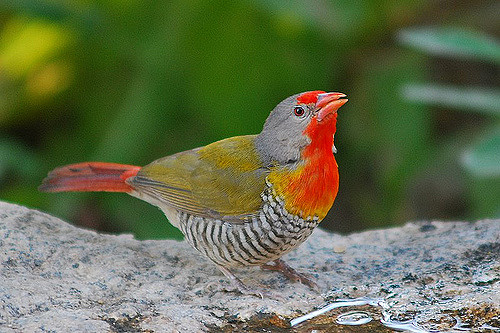 This recording of the call of the Green-winged Pytilia – a rather undemonstrative bird – is not in fact particularly good, because there are such a lot of other bird sounds on the same tape: it is hard to distinguish the bird itself.  You can hear it, though, if you’re careful: the high-pitched cheeps in the foreground.  But the whole ensemble or melange of bird sounds on the tape are so beautiful, it is worth listening to in any case.  It was recorded in the South Luangwa National Park in Zambia in the middle of that country’s narrow ‘waist’, about midway between Lake Malawi and the extraneous bit of the D R Congo which juts out into Zambia, nearly severing it in two (lines designed, I suppose, to ensure that the rich minerals of Katanga fell on the Belgian side of the border).

I have, I must admit, only seen this bird once here at the college: it was foraging on the ground.  It is described as a ‘fairly common resident’, especially of semi-arid Acacia savanna, which is not a very good description of Mount Pleasant.  They’re quite widely distributed across sub-Saharan Africa, though not so much in South Africa or Central and West Africa; which is to say, more simply, that they are found mainly in Southern and Eastern Africa.  But it is a pretty thing: I have included both male and female – you can guess which is which, perhaps.  They’re seed-eaters, of course: you can tell by the beak.

You noticed, I’m sure, that my book was unable to explain the species name of ‘melba‘. But in fact it gives this small bird an important place in the history of science since it was named ‘Melba Finch’ by the great Linnaeus himself, though we don’t know why.  Not that many birds can say that.

Carl Linnaeus (1707-1778) was a Swedish botanist, physician and zoologist who formalized the modern “binomial” system of nomenclature for organisms, by which we use two names to specify these into genus and species (quite often with one in Greek and the other in Latin).  He is known as the “father of taxonomy” and was a hero of the European Enlightenment.  Rousseau sent him a message: “Tell him I know of no greater man on earth”, and Goethe said “With the exception of Shakespeare and Spinoza, I know of no one among the no-longer living who has influenced me more strongly”.  Strindberg said that Linnaeus was a poet who happened to become a naturalist which is, I think, a very nice thing to say of a naturalist.  (Thank you, Wikipedia).

Taxonomy – classifying things into nice, neat classes that show the order implicit in nature – was a very Enlightenment thing to do.  Into such a system, you can begin to construct a single scheme within which to fit all the riotous variety of birds and fish and mammals and animals, and eventually people and cultures too, that one kept encountering in the rapidly expanding world.

That is a very seductive thought: that we can make sense of it all!  A single system by which the whole of creation can be identified and re-identified, exactly, precisely, accurately!  It is so reassuring, isn’t it, to know that all of this apparent chaos can be reduced – by us – to such beautiful order?  And those beautifully ‘scientific’ sounding Latin and Greek names are so much cleaner and more, well, useful than the messy multiplicity of appallingly imprecise local names that things are known by in the places where they can actually be found.  (In Tsonga, Pytilia melba is known as Xindzingira bhanga, for heaven’s sake!  who can pronounce that? [answer: the Tsonga can])  Much much better if WE give them ‘official’, ‘real’ names so that WE can be sure that WE are all talking about the same thing. Which is so important.  For US.