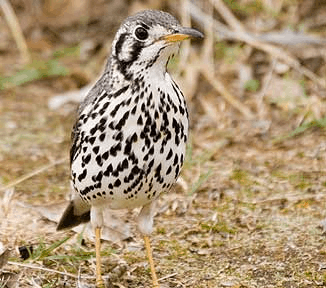 When you are trying to identify a bird, size, shape, colour and markings are often the things you pay most attention to. Notice, in this case for example, the large black eye, the colour of the legs, and the fact that the lower ‘mandible’ of the beak is yellow while the upper one is grey. In fact, though, there are quite a few other helpful things to observe. Where it is when you see it, for instance.

This bird, the Groundscraper Thrush, you will almost always see on the ground, foraging for food: it is a ground-forager, looking for insects and worms, running over the grass and then stopping and standing up very tall to check for dangers. Other birds, like swifts, for instance, you will hardly ever, or even never, see on the ground. Some birds prefer to sit at the very top of a tree, others prefer to skulk lower down or right in the middle.

Different species like different kinds of trees, too. The way different kinds of birds move, too, is distinctive: the way they run or the flight path they take, for instance, and their style of flapping their wings. Some fly in a series of long leisurely swoops, others in a furious flurry of wing beats. Posture, too, helps to identify a bird: some sit very straight up on the branch, others bend low, almost parallel to the branch.

Ground-foraging birds have to keep a good look out for predators such as cats or goshawks: they often move nervously (unless, like some species, they have posted a sentry to give warning of danger). The Groundscraper Thrush has a curious mannerism when it ‘scrapes’ the ground looking for worms: it flicks one wing quickly, as if signalling something, or like an involuntary nervous ‘tic’. I have spent quite a bit of time watching them to see if it is only one wing, the right one, that gets flicked: I think I once saw one flick its left wing, but I am not sure of my memory now. What does this wing-flicking mean? I don’t know, and I haven’t found any suggestions. It certainly helps the birdwatcher to identify this bird! I googled images of this bird to try to find a picture of one actually wing-flicking, but the action, though it happens often, is so quick it is hard to capture it well in a still photograph, I suppose.

Learning these species-distinctive ways birds have of moving comes only with frequent and patient observation: but once you know a bird’s style, you can often identify it just by that. It is well worth googling birds, by the way: you will find dozens of photos, some of them really excellent, and often videos as well.

Why are some (not all) eggs decorated so elaborately? In some cases, such as ground-nesting birds, it is clearly for camouflage; in others, it is probably to discourage predators (to suggest that the eggs are inedible, for instance) or brood parasites (to make foreign eggs easy to distinguish); in others, we simply don’t know. Perhaps it is for fun or for beauty.

The process of egg colouring is interesting: the egg receives its decoration as the egg passes through the oviduct (‘egg channel’) on the way to being laid. The oviduct is equipped with special glands which ‘paint’ the colours on while the egg is passing through. Spotted or blotchy eggs, like that of this Groundscraper Thrush, must have received their colours while they were momentarily stationary in the duct.

Other birds, like the African Jacana, lay eggs that are covered in swirling streaks and lines, as in the picture below: when these were applied, the egg is made to spin slowly round in the duct. Not many of us could do that: just think of the muscles and muscle-control that must involve! There’s an artist inside every bird. Well, every female bird, I should say.