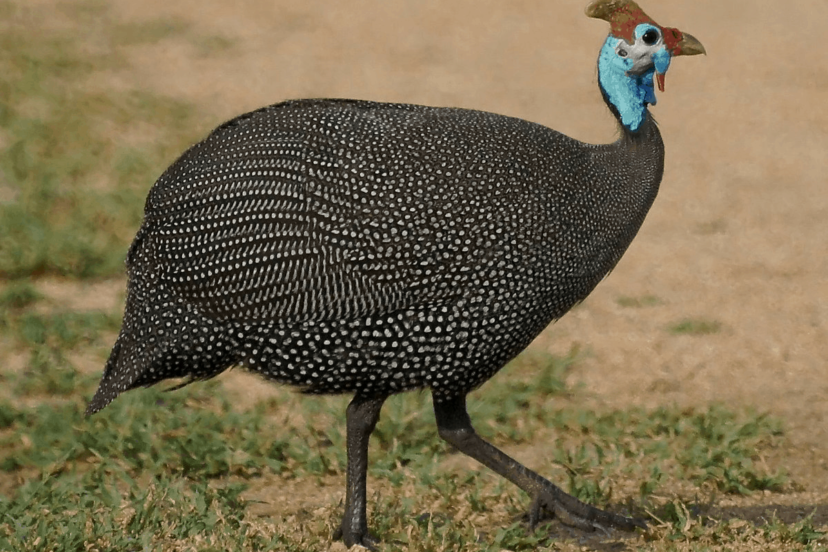 Sound and video: https://www.youtube.com/watch?v=_y7OgJNqw8c (this video shows the domestic hybrid rather than the wild bird, but the sounds are the same).

Nowadays you will, more and more, see these birds, kept with domestic chickens, even in urban areas.  These domesticated birds have been cross-breeding with chickens, I suspect, and look slightly different from the wild one pictured above: their wattles on each side of the beak and face are red rather than blue.  In the wild, guineafowls can form large flocks – in fact, I don’t think you will ever see single birds alone.  The book says ‘common resident but decreasing in numbers in some regions since the 1980s’.  Like chickens, they eat almost anything, insects, seeds, bulbs, tubers and berries.  They get eaten, too, by eagles, jackals, felines and – of course – humans.

Answers to last week’s questions: Why do birds sing?  And why do they mimic?
Almost all birds make sounds: some make a great deal of it, and there are many different sounds that they make.  Ornithologists do not completely understand what all these sounds ‘mean’, but they seem to agree that all calls do have some ‘meaning’.  The basic uses of bird sounds seem to be

(2) as a vocal ‘beacon‘ to mark and proclaim territory

(3) as a romantic ‘song’ to entice and woo possible mates

(5) as a contact call to keep in touch with other members of a group.

These sounds can be divided, roughly, into two types: “calls” i.e. simple sounds made by both male and female birds such as alarm or contact calls, and “songs” i.e. longer and more melodious sounds used usually by males as part of mating behaviour or to proclaim and defend territory.  There is, therefore, also a sixth use of bird song, which is:

(6) as a means of proclaiming species and even individual identity. It may be that females may be attracted to a particularly good songster, taking it to be a sign of ‘good’ genes. It is now thought that the ability to make these distinct sounds is partly inherited and partly learned.

Birds do not have vocal chords as we humans do in the larynx, which is the voice production unit at the top of our wind-pipe.  Bird-calls and songs are produced in the “syrinx” at the bottom of their windpipes, so deeper down in their bodies. Air vibrates over the vibrating membranes of the syrinx to produce the sounds. Interestingly, the syrinx is supplied with air from two bronchial tubes (rather than just one, like our larynx), one from each lung, giving two separate sources of air which can be controlled separately.  This enables them to produce at the same time two completely different sounds, with different pitch and quality: they can, it seems, sing in harmony with themselves!  Not only this: they also have in their bodies a number of “air sacs” apart from their lungs which can also supply air as well as the lungs, a bit like bag-pipes: thus they can produce sounds without having to interrupt it in order to draw breath as we do.  One bird which does this (and which will feature as the ‘Bird of the Week’ sometime soon) is the Crested Barbet: its call can last for minutes without a break.  It’s a bit like a persistent alarm-clock ringing to get you out of bed.  It is sometimes called the “Clock Barbet”.

Why do some birds mimic the sounds of others?  The answer to this will, I am afraid, have to wait to next week.