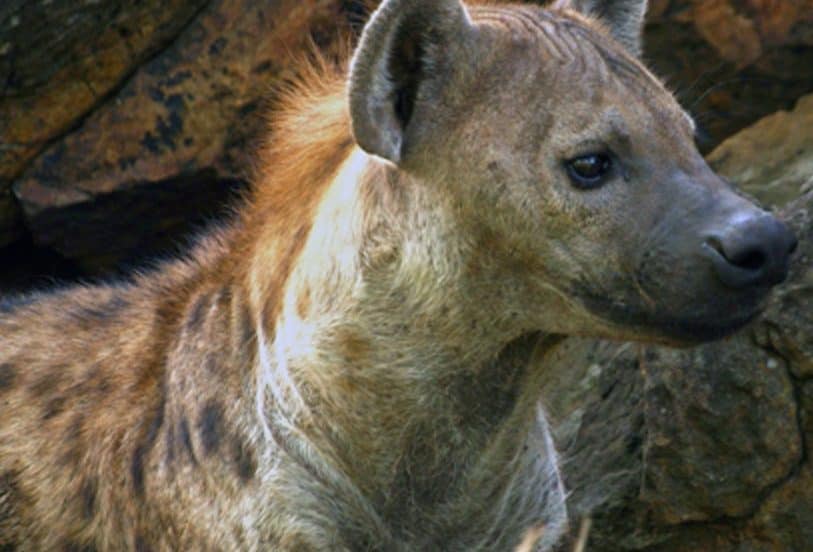 The idea that hyenas are hermaphrodite has been around for centuries. A number of writers over the centuries have claimed that the spotted hyena had the genitals of both sexes in one body or, alternatively, that it could change its sex. In Physiologus, a Christian text from the second century A.D., the hyena is said to alternate between male and femaleand thus “is unclean because it has two natures”. But it was only as recently as the 1930s that scientists examined hyenas properly and found that they are divided into completely separate, ordinary male and female genders but the female genitals look like male genitals and so it is difficult to tell the sexes apart.

Female hyenas have a vagina which cannot be seen from outside the body but which functions as it does in all mammals. But they also have what is called a pseudopenis (also known as a “peniform clitoris”). The clitoris is a small, sensitive, erectile part of the female genitals at the front edge of the vulva in all mammals. In hyenas the clitoris is almost the same length as the male penis and possesses the same erectile abilities, in other word it is capable of an erection like the male penis. The pseudopenis is an external extension of a reproduction channel one meter in length — which is exceptionally long in proportion to the body size of a hyena. The female also has a fake scrotum because the labia have fused and are ﬁlled with fatty tissue creating the appearance of two pads that look identical to the male testicles.

In fact unless the lacteal glands of the female are swollen while suckling cubs it is next to impossible to tell the difference. (An adult female is suckling almost all the time and has one pair of teats which is visible between the hind legs.) However, the end of the male penis is sharper than that of the female and there is also a visible difference in the proﬁle of male and female hyenas standing –  the belly of the male hyena curves upwards between the hind legs, while that of the female is more level due to a small udder at the back of the abdomen.

(These prominent genitals are already visible in the young.)

Females are bigger and more aggressive

The other fact about hyenas which has probably confused observers over the centuries is that unlike most mammalian societies, female spotted hyenas are dominant, are at least 10% bigger than males and are significantly more muscular, have much higher testosterone levels and much more aggressive than males.

It is important to understand that though the genitals of the female appear to be masculine, they still retain all the usual female functions. Females urinate, mate and give birth through this pseudopenis.

The vaginal opening is at the front end of the penis-like clitoris, and faces forward, so successful mating for hyenas is difficult and takes practice because the male has to crouch behind the female and somehow get his penis to point up and backwards to enter her clitoris. During mating the clitoris retracts, almost like a sleeve being drawn back. The female is mostly mounted by a nomadic male which joins the clan only temporarily. Since females typically act dominantly and aggressively toward males, the male has to work up the courage to approach the female who will aggressively chase the male off until she reaches the peak of oestrus. Copulation lasts roughly ﬁve minutes and is repeated. Since the sons of alpha females are born hyper-aggressive, they start trying to mount females at just a few months old, giving them a better chance of achieving successful mating later in life.

The following is an account of the birth process taken from the book Aardvark to Zebra: Questions and Answers.

“During birth the cubs have to pass through the long, narrow birth channel situated in the centre of the pseudopenis. To the human eye the female appears to give birth through a long penis, which stretches during birth, resembling a water balloon. Still, the clitoris has to tear with the ﬁrst birth to allow the cubs to pass through; the opening of the clitoris is 2,2 cm, while the head of the foetus is 6-7 cm. This leaves a wound which takes weeks to heal. The foetus moves roughly 60 cm through the abnormally long birth channel. The umbilical cord is only 12 cm long, snapping long before the birth. This means the cub is without oxygen for a few minutes, and consequently many ﬁrst-time births result in the death of the cub, and sometimes that of the mother as well.

“ln captivity it has been found that the birth process can last as long as 48 hours. ln the case of ﬁrst-time births, up to 75% of the cubs could die, and 9-18% of the mothers. … it is no coincidence that many females aged 3-4 years die as this is usually the age when ﬁrst births occur… After giving birth, a female can be recognised by the pink vertical strip of damaged tissue visible on the clitoris. This tear never completely recovers and subsequent births are easier and faster.” (pp. 426-7)

The apparently hermaphrodite nature of hyenas is only one of the negative characteristics that have been attributed to hyenas over the ages. All the other myths about them are equally unjustified. We will return to the subject of hyenas in a later blog and look at how these highly intelligent, socially developed, devoted parents and skilled hunters have been maligned.