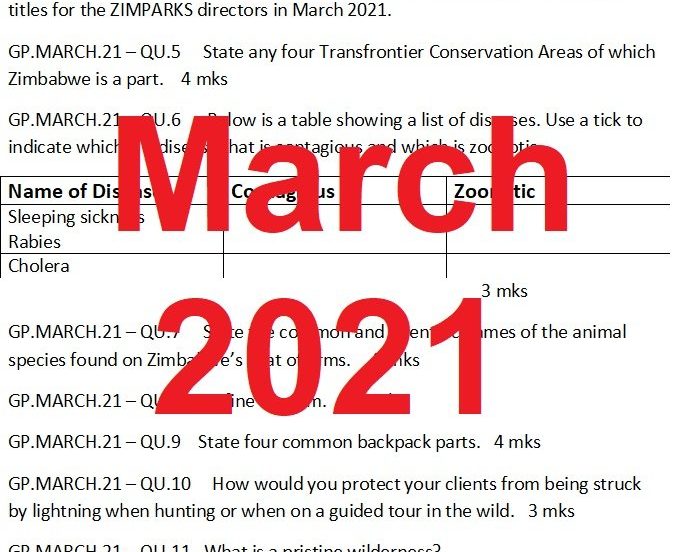 FA.MARCH.21 – QU.1    What are the functions of the following rifle parts?

FA.MARCH.21 – QU.8         What do the following abbreviations mean in ballistics terminology?

FA.MARCH.21 – QU.12 Define the following terms as they are used in relation to Firearms:

HH.MARCH.21 – QU.1   Identify the vegetation type that is described below:

Dominated by Colophospermum mopane and occurs at lower altitudes than miombo below 900m. Climate regimes are hotter and drier than the Highveld. 2 mks

HH.MARCH.21 – QU.2    Fill in the following the table to compare habits of young ones between soon after hatching or birth: 4 mks

HH.MARCH.21 – QU.4     Explain the reason why a rhino and a hippo have very different gestation periods yet they are similar in terms of weight and size.   2 mks

HH.MARCH.21 – QU.6      Explain why mostly nomadic male lions are often problematic and a source of human-lion conflict in rural communities that are surrounded by big game.       3 mks

HH.MARCH.21 – QU.9    Explain why the black rhino calf runs behind its mother compared to the white rhino calf which runs in front of its mother.    4 mks

HH.MARCH.21 – QU.12 What are the gestation periods of the following animals?

This picture shows a lion skull 30 days after the hunt. Describe how you would take a trophy measurement of the lion using the Rowland Ward method.    5 mks

HH.MARCH.21 – QU.16    Distinguish between reptiles and amphibians in terms of environment for egg production.    2 mks

GP.MARCH.21 – QU.3      In which tourist destination or city or town do you find the following hotels?

GP.MARCH.21 – QU.4     Summarize the changes that occurred in the four job titles for the ZIMPARKS directors in March 2021.

GP.MARCH.21 – QU.5     State any four Transfrontier Conservation Areas of which Zimbabwe is a part.    4 mks

GP.MARCH.21 – QU.6      Below is a table showing a list of diseases. Use a tick to indicate which is a disease that is contagious and which is zoonotic.

GP.MARCH.21 – QU.10     How would you protect your clients from being struck by lightning when hunting or when on a guided tour in the wild.   3 mks

GP.MARCH.21 – QU.12   You are planning to go on a guided tour and you observe clouds moving in all directions or contrary to the ground wind.   What would you do?    2 mks

GP.MARCH.21 – QU.14  You have a group of 16 clients from China, Mauritius, South Africa and Liberia visiting Great Zimbabwe monuments.  Entry fees for adult locals is 3 USD, regional is 10 USD and international 15 USD.   Considering that there is a total of four children (each paying half the normal entry fee) from regional countries, how much money are the clients going to pay for their entry fees if there is an equal number of clients from each country? 2 mks

GP.MARCH.21 – QU.16    Your client mistakenly left a rifle at a camp within Matesti Safari Area and you drive back to collect it. The camp is 35 kms away and you are driving at the recommended maximum speed to and from the camp. The process of rifle collection at the camp takes 1 minute and 36 seconds. How much time will you require to bring back the rifle?    3 mks

LAW.MARCH.21 – QU.1   When marking manufactured ivory describe the details which are engraved on the ivory.2 mks

LAW.MARCH.21 – QU.2    Peter imported an unregistered horn at 1400hrs on the 2nd March. As he was driving towards his home the following day at 1100hrs he was stopped and arrested by police officers for unlawful possession of a horn.  What advice would you give Peter as he presents his case to the police?  3 mks

LAW.MARCH.21 – QU.3     Professional Hunter Mark, operating Mark Safaris, went to a quota setting workshop and demanded 10 elephants.  In actual fact Mark does not own a farm with animals. Mark’s request for a quota was turned down by ecologists from Parks and Wildlife Management Authority.  Mark went to court to challenge the turning down of his request.

a. Were the rangers correct in their application of the law?   2 mks

b. If Kevin had come directly from wherever their base camp was and used the boat only to transport himself directly to the Zebagwe RDC and had seen the buffalo as he made landfall at his destination would his actions of shooting the buffalo constituted unlawful hunting. Support your answer.   4 mks

LAW.MARCH.21 – QU.7   State the conditions under which the Minister may grant a permit to any person to hunt a grysbok in a Sanctuary.    2 mks

LAW.MARCH.21 – QU.8     Thomas had his vessel impounded on the 1st January,  at Lake Kariba Recreational Park. On the 3rd September of the same year the Director of National Parks & Wildlife Authority ordered that the vessel be auctioned.   What advice would you give Thomas?      3 mks

LAW.MARCH.21 – QU.9    During a legal hunt  in Matetsi Safari Area John decided to shoot a grysbok with a smooth-bore with an internal barrel diameter of not less than fifteen millimeters and propelling a shot of an average diameter of not less than 5 millimeters.  Rangers arrested John and  charged him with the offense of using the wrong calibre for shooting a grysbok.  Were the rangers correct in terms of the law?     3 mks

LAW.MARCH.21 – QU.10    Rangers on patrol in the Matusadona  National Park shot 5 dogs which had been in the custody of a person unlawfully in the park.  Was this act of shooting a lawful one?   1 mk

LAW.MARCH.21 – QU.11  Peter was given a special permit to hunt a leopard at night in Hurungwe Safari Area, which is owned by National Parks and Wildlife Management Authority.   Is this allowed in terms of the law?    2 mks.

LAW.MARCH.21 – QU.13   Mr. Chowe was found keeping baboons as pets on his plot located in an urban area. Rangers arrested Mr. Chowe  for keeping the baboons.  Was this arrest lawful?  Support your answer.        3 mks.

LAW.MARCH.21 – QU.14  Mike was given a trophy dealers licence in August.  He gave his address as 16 Sandringham Drive, Harare.  It was noted when Parks officials went to inspect Mike’s premises after 20 days that he had moved to another premises.  Was there anything wrong with what Mike did in terms of the law?      3 mks

LAW.MARCH.21 – QU.15    Professional Guide Chipo intended to enter Hwange National Park with a boy 5 years of age, a girl 8 years of age and a Zimbabwean war veteran aged 64 on the 6th of March, 2021.  He was not sure of the payment terms but was correctly advised that a 30-year-old man would pay Zimbabwe $300 conservation fee.  How much would each of his clients pay?   3 mks