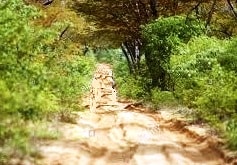 Hwange National Park is the oldest national park in Zimbabwe, established in 1929. It is also the biggest, covering an area of about 14,500 square kilometers. It is bordered by Botswana on the south-west and the Bulawayo-Victoria Falls railway line on the north-east. The park has a great concentration of animals, including more than 100 species of mammals including elephant, white rhino, buffalo, zebra, lion, leopard, cheetah, wild dog, giraffe, eland, gemsbok, sable, roan antelope, hippo, hyena, aardvark and various other nocturnal species. It is particularly famous for its huge population of elephants (more about that later). It is home to about 400 species of bird and a favoured destination for bird watching enthusiasts

WHY IS HWANGE SO SANDY? AND WHAT ARE THE IMPLICATIONS OF THIS SANDINESS?

In a hot, dry period of the earth’s history, from about 100 000 years ago, winds blowing over the Kalahari Desert began to carry sand to the north-east, depositing it over the present-day Hwange area. Slowly, over a period of almost 90 000 years, the basalt Hwange hills and valleys and rivers were smothered by Kalahari sand and the area became a fairly level landscape of undulating sand dunes, with the layer of sand on average 50 meters deep.

Very gradually, as the climate became somewhat damper, this landscape was populated by vegetation of scattered woodland scrub and grassland that held the sand in place. There were no rivers or other permanent sources of water and on the whole rainwater percolated rapidly through the sand until it met the basalt layer under the sand but in the rainy season some water would collect in hollows (called “pans”) which developed largely impermeable clay bottoms and stand there providing drinking water for animals. This water would evaporate quite rapidly as the dry season set in and the pan would eventually become a dusty bowl until the next rainy season. During the rainy season, however, a wide range of game would be attracted to the area by the lush vegetation and many sources of water. These animals would then drift away as winter set in, because of the absence of water.

(This picture is different in the north of the park where the ancient sand cap thins to a clay and basalt layer with granite outcrops among extensive mopane woodland, drained by the Lukosi and Deka Sand Rivers and providing natural seeps where elephants and other wildlife still dig for water, as did the San people who once inhabited the area.)

For many centuries the Hwange area was roamed by nomadic hunter-gather San people, attracted by the great herds of migrating animals and able to survive the dry winters by their bush craft. Eventually they were replaced by Bantu-speaking tribes and in the early 19th century the Hwange area became the royal hunting grounds of the Ndebele warrior-king Mzilikazi but was largely deserted during the dry seasons.

In the 1920s the Rhodesian government acknowledged that the absence of perennial water made the Hwange area unsuitable for any kind of sustained agriculture and so it was the last retreat of big game animals that was not under pressure from humans. Preserving the area in its natural state would be a way of preserving the game attracted by the pans in the rainy season. (Most plains game species are naturally nomadic, and their predators follow them.) In 1928 the Hwange area was declared a reserve and named “Wankie” after a local Nhanzwa chief (the name was later changed to Hwange as a better phonetic representation of the original name).

In September, 1928, Ted Davison, a 22-year-old official employed at the time in Tsetse Fly control, accepted the appointment as First Warden. In the 33 years he remained in charge of the reserve, Ted Davison developed it to its full grandeur as a great national park. The original Wankie Game Reserve, as it was first called, was proclaimed as a national park on 27 January 1950.

You might want to read Ted Davison’s book Wankie: The Story of a Great Game Reserve, published in 1967 by Books of Africa (Cape Town) – a quiet, modest account of an extraordinary career.

Davison began, slowly, to build windmills to pump from the underground water trapped above the basalt layer to keep the pans topped up during the dry season so that the elephants would not have to migrate away to find water elsewhere.

Within a decade of the supply of the first sources of pumped water the elephant population in the area had doubled and continued to grow at an astonishing 5% per annum. The birth rate showed no sign of decline even when the elephants’ massive daily diet of 200-300 kgs of vegetation per adult began to impact negatively on the environment, particularly during the dry season.

Hwange is now home to one of the biggest elephant populations in Africa, a far greater concentration than can be sustained by the fragile natural vegetation.

In another blog I will discuss the issue of elephant over-population in Hwange National Park.