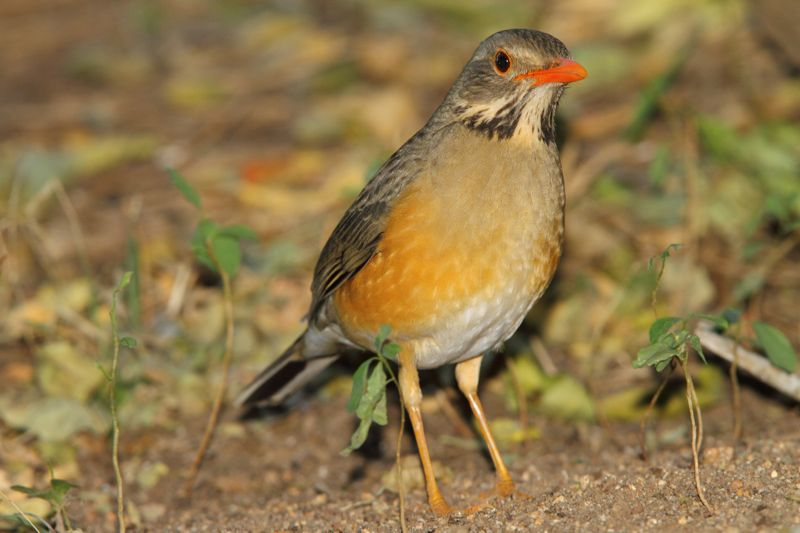 This picture, taken I fancy, in the rich golden light of the sun before it disappears, brings out the rather lovely colours of this bird: burnt orange, grey and black.  You notice the yellow legs and the fetching orange rim around the eye.  The two distinctive things about this bird, which (up until recently) you could see every day on and around our campus, are, firstly, the way it runs: it lowers its head till its body is more or less parallel with the ground and then moves with very quick steps, stopping abruptly and raising its head tall in order to look around and check for danger.  The second thing is the alarm call, which you can hear very often in the early morning and evening: there is a good example on the site listed above.  It is a very distinctive call and you can see it (I think) expressed onomatopoeically in the Portuguese name (I would guess): chi-char-rio.

However, this rather urgent and insistent alarm call is far from their only vocalisation.  They are in fact beautiful and creative singers, and they can put on a lovely concert of impromptu songs, usually from the top of a tree.  Usually early in the morning, sometimes being the first bird call I hear in the day, you can hear them trying out a little sequence of notes, a tune, repeating it a number of times, and then developing it slightly: as if they are composing as they sing.  Sometimes you can hear a neighbouring thrush answer in the distance.  It is a beautiful thing.  It took me some time to recognise who (i.e. which bird) was making that lovely call and I was surprised to find that it was this often rather drab-looking and nervous bird.  It just goes to show.

They are listed as a “locally common resident, usually in pairs, with some seasonal movement”.  Well, it is true that I haven’t seen one for a while, so perhaps this is one of their moving seasons.  I miss them singing their hearts out as I make my own first movements of the day.

I once sat at a table in an outdoor restaurant in Harare under a tree in which a Kurrichane Thrush was sitting on its eggs in one of the lower branches: it was very close and seemed willing and trustful enough to stay through our meal without leaving its nest. As I remember it, it was low enough for me to reach up and touch it, though of course I did not.  It was a pleasure, though, to sit underneath such a dedicated mother.

The Kurrichane’s eggs (now, why didn’t the book explain the name “Kurrichane”, or even give some advice on pronunciation?) are a rather beautifully understated pale blue with brown spots.  Apparently it takes 24 hours for the egg of one of the smaller birds to form, and so a clutch of three Thrush eggs would have taken three days to lay.  Larger birds take longer and there may be two to three days between eggs.

According to Wikipedia, “Its common name is derived from a corruption of Kaditshwene (rendered as ‘Kurrichane’) in South Africa, where the original specimen was collected. That name is thought to be based on a Tswana expression, “Ga se ka ditshwene!”, which means “What an incredible number of baboons”.”

Most birds lay their eggs in the early morning.  Why?  No, not to provide an egg for your breakfast.  It is because then the mother will not have to lug it around as she spends the rest of the day foraging for food.  It makes good sense (this is a very sensible bird) and it is true that the Kurrichane Thrush always looks very busy: no slouch she (or he, either).  And even with those bulky eggs inside, they always seem to retain their lovely trim figure.