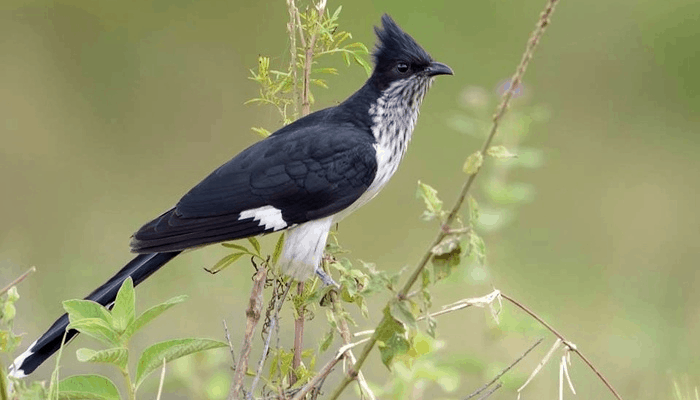 Call: http://www.xeno-canto.org/213635  (ignore the dove and other birds you can hear in the foreground).

This bird is described as an “uncommon and secretive breeding migrant, arriving in October, departing in May”.  We have them around Harare – I heard it only the other day.  Actually it was the call that first puzzled me: I mistook it for the call of some kind of raptor I did not yet know, and I spent a number of days being frequently distracted from my desk by the call, rushing outside to try and see it, and failing.  I eventually did see it, calling occasionally from a tall tree and sitting beautifully still and calm to give me all the time I needed to appreciate it and identify it (with the help of my book).

It’s a big bird: 39 cm which I think is over 15 inches long.   It visits Southern Africa from the north.  I imagine that it was calling, calling, calling, hoping to see a beautiful mate flopping through the trees towards the enticing noise, and this might explain the loud and repeated calling: I hope it did find a lady cuckoo eventually, and perhaps that is why it stopped calling for quite a while.

Levaillant’s Cuckoo, like most (if not all) the cuckoos, is a “brood parasite”.  That is to say, the female lays its single egg quickly in the nest of another species of bird entirely – this one usually chooses the babblers, which we see a lot around here – when the host bird has momentarily left her eggs unattended.

(See the photo below: a big fat Levaillant’s cuckoo chick in the foreground with a Carrion Crow chick gaping for food.)

The female cuckoo has to seize its opportunity and act quickly: the male tries to distract the host birds by flying loudly and ostentatiously nearby and so allow his mate to carry out their sneaky trick.  It’s a cunning double act, and after it is done the guilty cuckoo pair make off, never to set eyes upon their offspring.

For the whole point is to trick the host parents into doing all the hard work of feeding and raising the cuckoo chick thinking it is their own. It works, and it all makes obvious evolutionary sense from the cuckoos’ point of view: someone else does all the heavy lifting of raising the next generation.

Naturally, evolution has tried to equip the host species with counter measures, such as marking their eggs in distinctive colours to make the intruders’ eggs obvious in the nest, or marking the insides of the chicks’ mouths with special, distinctive patterns.  Probably these ploys have worked in many cases, though I suppose we only know the ones in which they haven’t.

For many cunning brood parasites, including our Levaillant’s Cuckoo, have been able to lay eggs which look similar to those of their hosts, and some also mimic the mouth markings as well.  And many host parents, let’s face it, just don’t have the smarts to notice; or rather, the instinctive urge to fill gaping and demanding mouths is just too strong to resist, even when the mouths belong to birds “of another feather”.  The evolutionary drive works against them – at least until it works out for them an appropriate defense.

This kind of brood parasitism can be quite gruesome: some cuckoo parents remove and eat the hosts’ eggs themselves before replacing them with their own egg.  In other cases, the cuckoo chicks themselves eject the eggs out of the nest as the first thing they do, leaving themselves as the only gaping hungry mouth to be fed.

You can see a rather good film of this at the following site (https://konk2014.wordpress.com/2014/03/) though the parasite in that case is a different kind of cuckoo (the Common Cuckoo, I think).

Some parasite chicks have a specially concave hollow in the back which helps them shovel the eggs out of the nest backwards.  Even more unpleasant, honeyguide chicks come equipped with wickedly sharp hooked beaks with which they mercilessly kill the chicks of their host when eventually they hatch.

Why, then – you might well ask – why in the photo above is the Levaillant’s chick sharing the nest with the crow’s chick?  Why hasn’t it tossed the chick out?  It seems that, at least in some places, the Levaillant’s Cuckoo chick does not get rid of the host chicks but grows side by side with them.  One theory is that the Levaillant’s unpleasant habit of ejecting a smelly fluid on potential predators deters nest predators such as foxes and rats – which means that it is in the interests of both host and parasite to have a Levaillant in the nest.  An interesting twist.

You’d think, wouldn’t you, that a cuckoo who has been brought up by a babbler and has never seen its own parents or any other cuckoos would suffer from some kind of identity crisis.  Is it a cuckoo or a babbler?  How do they learn to sing their particular song and recognize birds of their own species when they finally fly the nest, for they have never heard their parents sing?  Why don’t they learn the songs and behaviors of their hosts?  My book says “it’s a mystery”.  Which seems a good point at which to end.  What can you find out?