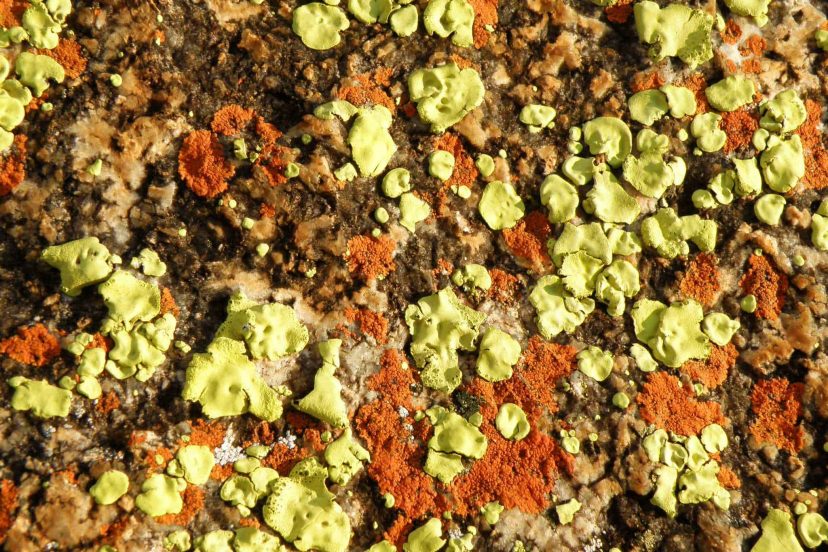 Cathy Sharp, Zimbabwe’s fungus expert, also tells us about lichen (sometimes pronounced to sound like ‘liken,’ sometimes to sound like ‘kitchen’).  Lichens comes in many colours and sizes.

They may have tiny, leafless branches, flat, leaf-like structures, flakes that lie on the surface like peeling paint, a powder-like appearance, or other growth forms.

Lichens do not have roots that absorb water and nutrients as plants do. Lichens grow in many environmental conditions, and can grow on almost any surface.

Lichens are very unusual. They are not a plants. We talked about “symbioses” in the article on fungi where two species benefit from each other, for example, a tree and a fungus. Another symbiosis occur where an alga and a fungus grow together to form a lichen.

A lichen is not a single organism the way most other living things are.  It is a combination of two organisms which live together intimately. Most of the lichen is composed of filaments of a fungus but living among the filaments are algal cells, usually from a green alga.

In some cases the fungus and the alga which together make the lichen may each be found living in nature without its partner, but many other lichens include a fungus which cannot survive on its own — it has become dependent on its algal partner for survival. In all cases though, the appearance of the fungus in the lichen is quite different from the separately growing individual.

Zimbabwe has a wide range of lichens in many habitats – from the wet eastern forests to the dry mopane woodlands in the Zambezi V alley and south-east Lowveld. Exposed granite throughout Zimbabwe and the Matobo Hills have a large diversity of lichen species.

Lichen is sensitive to pollution. Usually one can say that if lichen is present the air quality is high.