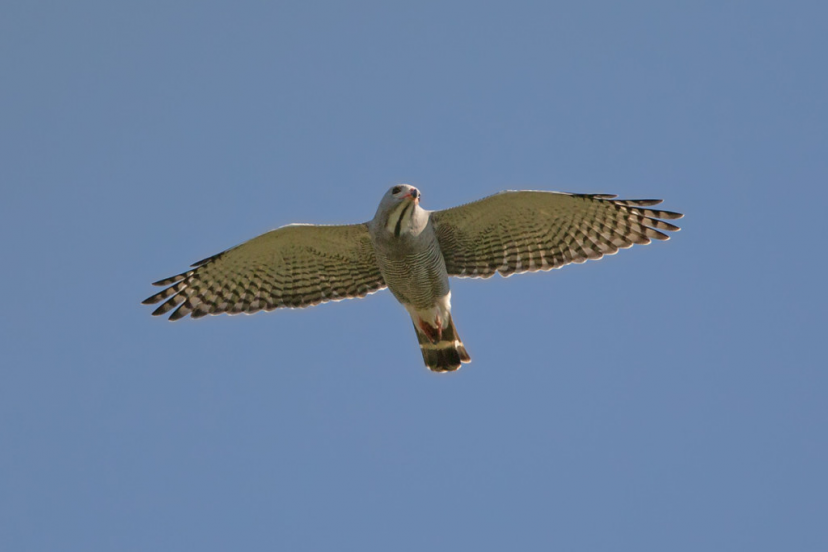 Species: monogrammicus, Latin = mono, single; grammicus = mark i.e. with a single mark, signed, referring to the mark on the throat)

Note, though, the colour of the legs and feet (yellow for the Buzzard and red for the Goshawk) and the banded tail (three black bands for the Goshawk and only one white band for the Buzzard).  The Lizard Buzzard is clearly distinguished also by the prominent ‘monogram’ on its throat: an unusual vertical black line on a white splash-patch.  It’s like a brand logo.

The calls are different, too: the Buzzard has a rather poignant and distinctive kli-ooo-kluklukluklu as well as a kind of mew.

Lizard Buzzards do not only eat lizards: like the Goshawk, they also have a reputation for raiding the nests of other birds and eating the chicks, as well as small snakes, rodents, frogs and invertebrates.

They are a sedentary species, meaning that they do not migrate seasonally but inhabit more or less the same territory; they are very widespread over Africa south of the Sahara, across all of Central and a lot of Eastern Africa (except for Ethiopia), going south as far as Zimbabwe and the north-eastern parts of South Africa.  They seem to avoid most of South Africa, however, as well as Botswana and Namibia: I wonder why?