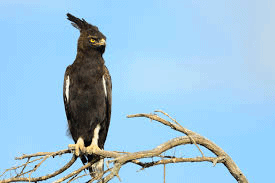 Lophaetus occipitalis (Genus: Lophaetus = Greek, a crested eagle; species: occipitalis = Latin, of the back of the head)

I have seen this bird quite often in the northern suburbs of Harare, though admittedly not for some time.  I have seen one sitting in a tree in the neighbour’s yard – looking hungrily down at their chickens! I imagine they make a living out of the many chicken-farms we seem to have around and about. It is nice to see them even here in the suburbs (though, of course, I am not an urban chicken farmer).

They are among the smaller of our eagles: 56 cm long (compare this with the great African Crowned Eagle which is 85 cm long and of which more below) and they seem to perch surprisingly low for a bird of this size.  I have seen them perched on durawalls and low fences.

More often, however, I have seen this Long-Crested Eagle overhead in flight.  Fortunately it is easy to recognize from underneath, as you can see in the second two photographs above.  It’s the clear and distinctive white ‘windows’ towards the end of the wings: you can spot these in flight from far away even when the bird is flying very high.

They eat rats, frogs, reptiles and insects, and rarely take birds (unless you count chickens as birds – do you?).

I mentioned just now the African Crowned Eagle.  I don’t think I will ever get the opportunity to see one of those around here and so I take my chance now.

The Crowned Eagle is a forest bird, and is the most powerful bird on the continent (or should that be ‘the most powerful raptor’ since the ostrich is a very powerful bird?).  It takes monkeys, antelopes, hyraxes, genets, and mongooses, and is said to have even taken small children.  I heard a radio programme once about African archaeology and listened to them discussing the mystery posed by two neat holes on either side of the skull of a pre-historic child that had been unearthed in one of their digs.  One of the scientists worked out that these holes in the child’s head corresponded exactly to the position of the huge talons of the Crowned Eagle when it grasps the head of a monkey to carry it off to a tree to eat.  So these birds have been around for a long time.  And perhaps, if they did fly regularly overhead here, we would be wise to equip the smaller members of our own tribe with helmets.