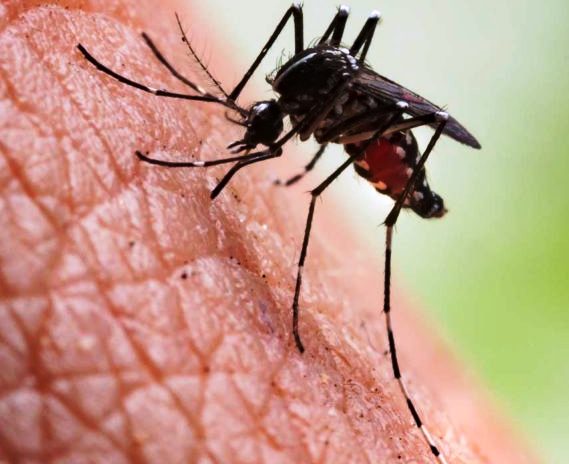 It is important for a field guide to understand as much as possible about malaria because this disease is still a major threat to health in the world in general and in Zimbabwe.   The threat lies, however, in contracting the disease. (These days there should be no threat of dying from malaria.) A good guide, therefore, needs to be able to give clients sensible, science-based information on prevention and treatment of malaria.

We all know that malaria is transmitted by a mosquito carrying the malaria parasite (called Plasmodium) from an infected person who has malaria in his/her blood to a previously uninfected person.   The malaria-carrying mosquitoes (as opposed to other “nuisance” types of mosquito that do not transmit malaria) are called Anopheles and there are several species, some better at transmitting malaria than others.  Also they may have slightly different behaviour such as when during the night they bite.  An Anopheles can be distinguished from other mosquitoes by its position in relation to a surface.

An excellent website for information about this infamous carrier of malaria is https://eu.biogents.com/anopheles-malaria-mosquitoes/

The more malaria-infected people and Anopheles mosquitoes present in a certain area, the greater the chance of being bitten by a mosquito transmitting malaria.  Any malaria control programme (which means a set of actions aimed at lowering or eliminating the chances for anyone in a community getting malaria) starts from the understanding that there are two factors at play: the number of mosquitoes present and the number of infected people present to infect mosquitoes.  The best control strategy is a combination of all the measures that lower the numbers of these factors.  Obviously, some measures are cheaper and more effective than others and that again depends where and how malaria occurs in different environments.  The list of disease control measures against malaria is long:

Essentially the most cost-effective measure in places where there is still a lot of malaria present and many people living close together, is sleeping under a bed net that is treated with a long-lasting insecticide.  This single measure was proven to reduce the number of malaria cases in villages in Dande valley by 75% even compared to people using a net that was not treated with an insecticide.

Individual Approaches to Prevention of Malaria

If you are an individual seeking to lower the chances of contracting malaria there three types of question to ask yourself:

(1) Is malaria prevalent in the area I plan to visit? Is it present throughout the year (this is called holo-endemic and would apply to areas such as the Lowveld)? Will I be going to a place where I can expect a lot of mosquitoes or a lot of other people around?

(2) How long will I stay in the area? Will it be just for a day or two and without time spent in the evening exposed to mosquitoes?

The answers to the above questions will lead you to appropriate actions to protect yourself from contracting malaria.

There are many personal actions you can take to lower the chances of contracting malaria. Most of them are obvious, some are cumbersome and only partially effective:

You can also take malaria preventive medication (called prophylactic treatment). Your choice of this medication would depend on your situation.  If you live and work for long periods in the Lowveld or in Kariba, Chirundu or Mana Pools area, etc., you may accept the risk of contracting (and treating) malaria against the negative side effects of the prophylactic treatment.

But if you are a visitor to Zimbabwe going into a high-risk malarial area for a short period of time and you do not want to spoil your (expensive) holiday with a bout of malaria there are many possible prophylactic treatment regimens. What may be recommended by European or American physicians is often over-cautious and involves sometimes serious side-effects of the prophylactic treatment that are worse than the (risk of) the disease.  An example is the use of the drug Lariam.

In Zimbabwe the prophylactic recommended by the Ministry of Health is Deltaprim® which is taken once a week.  Deltaprim is prophylactic treatment unique to Zimbabwe where it was discovered that patients receiving anti-leprosy treatment containing the compound Dapsone were protected against malaria.   Concerning Deltaprim use, it is less important how long before your arrival in the endemic area you take it, but it is very important that you continue for four weeks after being back from the endemic area.

My personal advice and my own ‘regimen’ is to take chloroquine (300 mg) once a week for up to 3 weeks after having been to a malaria area (accepting that the protection may not be optimal and looking out for flu-like of symptoms after returning). Chloroquine may not be 100% preventive but I think it lowers the risk at least by 80% (admittedly thumb-suck figures).  Chloroquine has been safely used for decades and was abolished as a treatment and preventive measure when it was in fact still effective in about 80% of the cases in most parts of Zimbabwe.  With the use of Coartem®  as a first-line treatment now for more than 12 years, chloroquine may well be more effective again.

RDT’s (Rapid diagnostic tests) are a way to test whether a person with malaria-like symptoms actually has malaria. They are now widely available and should be a part of every Zimbabwean First Aid kit together with courses of Coartem, especially if you are going into the bush for longer periods. (There is a great deal that can be said about RDTs – if you are interested you can look at a site such as https://www.ncbi.nlm.nih.gov/pmc/articles/PMC2696022/.) If  you experience flu-like symptoms you can use a rapid test to determine if malaria is present and if so take the Coartem according to the dosage guideline on the packaging. The more quickly you can begin the treatment the shorter and less debilitating the course of the disease. Make sure you finish the whole course, even if you are feeling much better – otherwise you will be contributing to building resistance to the drug in the general population.   Of course, if symptoms persist you should still consult a doctor.

As with all use of prophylactics, the most important thing to remember is the fact that there is still a (slight) possibility of catching malaria anyway and not recognising the symptoms for a dangerously long time. So the credo is: remember that it may be malaria when you get sick with fever, headache, etc., even if you get it long (weeks, even months) after returning from the malaria-ridden area.  If you are aware of that possibility, you will be ready to test for it in time and prevent complications.

For obvious reasons the medical personnel in non-malarial areas do not have the facilities to test for and treat malaria readily on hand. A visitor from a non-malarial area such as Britain would be well advised to take home with them an RDT kit and a full course of Coartem so that they can treat themselves speedily if necessary.

The best general information is on this subject can be found on Wikipedia:
https://en.wikipedia.org/wiki/Malaria_prophylaxis

For more specific advice there are plenty of websites that advise on prophylaxis types, dosage and duration, for example, https://www.netdoctor.co.uk/ask-the-expert/infection-faqs/a5406/which-antimalarial-drug-should-we-use-in-zimbabwe/

Introduction Most people come to Africa expecting or hoping to see The Big Five - elephant,…