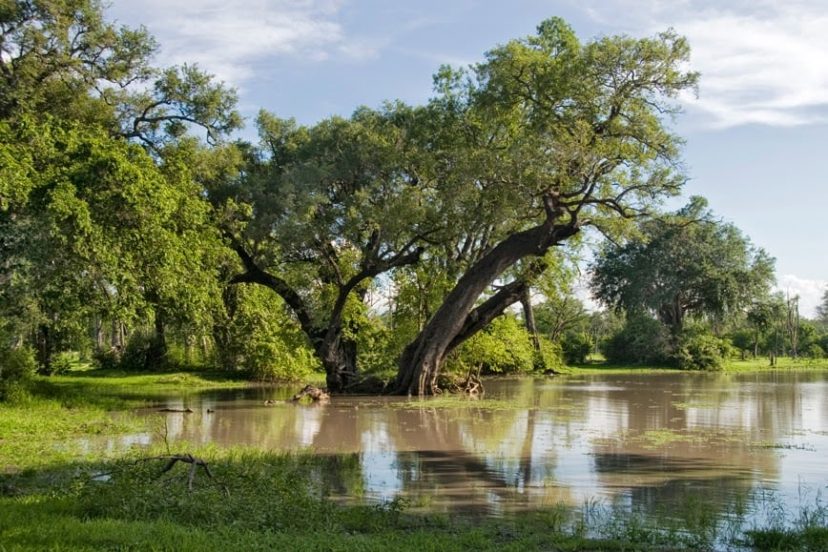 This article will focus on Mana Pools but it is helpful to have a picture of the whole of the northern border of Zimbabwe, defined by the Zambezi River, and of the various places along the river that are important in wildlife terms.

In view of current debates – often predicated on what’s “natural” and what isn’t, at Mana Pools:  here are some notes that may help clarify people’s minds.

Firstly, the “floodplains” are not, as I’ve noted elsewhere, genuine floodplains at all. They are, in fact, “alluvial river terraces” – which, although accurate, is something of a mouthful, but calling them “floodplains” distorts one’s understanding of the real processes at work.

Unless new research has emerged – which I accept it may have, in intervening years – my understanding is that the Zambezi has, at Mana, been steadily migrating northwards in recent geological times. The alluvium – taking the form of old river channels and levees  – was left behind by the river as it made this northward movement.

You can see the indications of the recent  boundaries of this movement, if you look for them. The south bank of Chine Pool  is a steeply-rising  ridge of red Kalahari sand; the pool and its north bank consist of grey alluvial silt, extending all the way to the Zambezi. Furthermore, a look at Google Earth will show you quite clearly the network of abandoned river channels extending – for example – through Long Pool to the Chine Pool area and beyond, down to Mana Mouth. Meanwhile, across the river, the red cliffs along the Zambian shore reflect the current northern boundary of the river’s northward movement across the valley floor.

Also, the famed Faidherbia albida (Winterthorn, or Ana) woodlands largely represent a “single-age” stand, with most trees being around 150-170 years old and possibly – (although this is my own surmise) developed after a significant “jump” in the river’s northward migration.

Only time – on a long scale – can tell us whether the undoubted changes in the Zambezi’s flood regime caused by the Kariba Dam will influence this northward movement of the river. But the point is that today’s “floodplain” scenario is not an age-old feature that is currently being destroyed by the building of the Kariba Dam*. Instead, we are looking at a very dynamic system, subject to undergoing dramatic changes through entirely “natural” forces. Some forecasts indicate that, in fact, the current alluvial terrace woodlands will ultimately disappear entirely, and be replaced by grasslands.

And the implication is that the gradual dessication of the existing terraces and their woodlands is inevitable; and well-meaning attempts to maintain the status quo by – for example – tree-planting, are  almost certainly doomed to be costly failures. The entirely natural forces at work are fundamentally irresistible.  As an aside, note also the development of F. albida stands on some midstream islands. We might speculate that these represent the future “Mana alluvium” (or floodplain!) if the Zambezi does indeed continue its northward migration.

As regards Kariba: one impact – that of increased bank erosion due to the creation of virtually a “single level” river – appears to be valid. Otherwise, impacts on the Mana alluvium appear to be relatively minor. One commentator has noted the possibility of controlled releases, and this – again, my own opinion, as I have not taken ecological advice on this – may provide some temporary and somewhat restricted alleviation. However, I’d guess that such releases would almost inevitably result in the flooding of some former river channels, with little consequent benefit to the F. albida stands between them.

And some of the wilder suggestions – such as the planting and irrigation of grasses along the riverbanks – would, on the face of it, merely create an ongoing maintenance headache and contribute even further to the present and very high animal pressure on the area.

This rather lengthy preamble leads almost inevitably to the question of wildlife management in general, and management of the Mana scenario in particular.

Make no mistake: this is a knotty and often controversial subject, compounded by the fact that – unlike many forms of government interventions – management actions in National Parks come under the scrutiny of a worldwide (and often misinformed) audience that includes a fair number of very vocal critics.

Many commentators have of course noted the matter of “natural corridors removed, and animals confined to certain areas” and this is a pretty obvious truism. To this one can add the loss of connectivity between such areas on a broad landscape scale; but the logical extension of this is that, once saddled with such constraints (as we are!) some form of management is virtually inevitable.

In Zimbabwe, the management of such areas is directed at maintaining the ecological integrity of these areas, and this – as per our longstanding and very well-drafted 1975  Parks Act – includes both  wildlife and plant communities. In some cases this may require re-introductions of some species that have come under undue pressure in the past. Wild dogs are a notable current case in point. So, too, is the reintroduction of black and white rhinos into areas in which they have been rendered locally extinct by poaching.

Sometimes, though, such management requires  what, to onlookers, may be unpalatable remedies, usually involving the reduction of animal populations in order to avoid consequences up to and including the destruction of habitats and the species they contain.

However, we should also note that – along with confinement into Parks and other protected areas – previous checks on animal numbers – including hunting for both sport and subsistence – have been removed, where National Parks are concerned. Furthermore, in some cases, measures such as the introduction of “pumped pans” have in fact contributed very significantly to much-increased animal pressure  on natural food sources, notably woodlands. Hwange is a longstanding case in point; but we are now seeing the installation of such pans in parts of Mana as well.

One might argue that such measures will “spread the load” and thus reduce pressure elsewhere. However, the Hwange experience indicates that in fact one merely achieves an overall – and potentially disastrous – increase in animal numbers.

Sadly but inevitably, the tourism industry (and indeed ecologically illiterate sectors of the public) appears ready to perpetuate such scenarios without regard for broader ecological considerations; in other words, to maintain inherently unsustainable situations, instead of allowing either human actions or natural forces to apply remedies.

An allied and very  disturbing development has been an apparent trend  on the part of the Parks Authority to manage Parks primarily for income generation and tourism, rather than for ecological goals. Meanwhile, most tourists – many of them unburdened with  any depth of ecological perception or knowledge – have a penchant for the spectacular. In short, for large concentrations of animals.

Over the years there have been several past attempts to reduce pressures on grazing and browsing  at Mana through population reduction exercises, aka “culling.” As far as I am aware none  have been carried out – largely due to public opposition to the concept.  Failing which – nature takes over, and imposes its own population reductions, but not until a great deal of damage has been inflicted on habitats. And the result – in the words of one leading local biologist – has been the “creation of ecological slums” in both Hwange and Mana.

This year may be somewhat extreme,  but – on the basis of 40 years of observation – I can safely say that in just about every late Mana dry season there is a die-off of varying degrees of severity. Meanwhile, this is also the peak tourist season, for the sadly obvious reason that many visitors want to see spectacular concentrations of wildlife, but have little understanding of what they are really seeing: weak animals in bad condition, desperately searching for pitiful scraps of fodder.  This abysmal lack of understanding is well demonstrated by all those FaceBook comments we see about a “Garden of Eden”, when what they’re really witnessing is a living Hell for most herbivores.

This is all compounded by the human pressure involved, which has been particularly severe in recent years due to Mana’s growing popularity and the addition of several new safari operator concessions. In fact, I’d go so far as to suggest that there’s a very good biological case to be made for closing the alluvial terraces (OK, the “floodplain”, if you insist) to all visitors from September until the end of December.

Fair enough; that’s rather a drastic step. But we are nonetheless faced with a simple but portentous decision. Should Mana be managed solely for tourism, with wildlife populations maintained – artificially if necessary, by means such as artificial feeding, and thus effectively cater almost entirely  for the sensitivities of tourists (and bednight occupancy statistics of safari operators)?

Or should we encourage a return to sound biological management that includes all aspects of a natural ecosystem – including an acceptance of the natural consequences of a drought?

There is little doubt in my own mind as to the answer. But – now you’ve read the above – I’d rather hear yours!