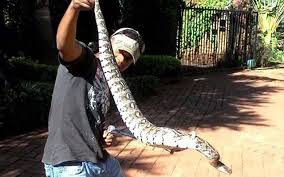 Forty-three-year-old Chawatama Marimo has been a mediator between snakes and humans for more than half his life. A man who understands both species, he continuously fosters harmony in his line of work.

Through his talent, he has saved many snakes, which have been discovered within households from harm. With the popularity he has earned so far in the capital, the man is revered despite his unusual talents.

“My aim is to rescue people from potentially dangerous snakes as well as the reptiles from people,” says Marimo.

People usually harm snakes and snakes are considered dangerous by homeowners. For that cause, his service goes with a teaching.

“I educate people every time they call for my service. I thoroughly observe their place, then furnish them with advice on how to nurture their place out of the snake-attraction zone,” he explains.

Of all hobbies and professions known to man, how did he end up dicing with death?

It was during his childhood that he discovered his talent and developed much zeal as he grew to become the best man he is on this particular calling.

“I grew up at Chawatanga Mine in Mazowe, where there were lots of snakes and they could get killed daily for no reasons. Eventually, it started bothering me and I realised that I had the ability to save the two species from endangering each other for no cause. I started catching the snakes, taking them into the bush for their safety and where they could not harm people,” narrates Marimo.

The snake enthusiast’s first charm was a python.

“My first catch was a python, when I was only 17 years old. This boosted my nerve that I never stopped,” he said.

Despite the long tangle in the snake world, Marimo was bitten once by a Mozambique Spitting Cobra, which took him a night to heal.

“In my entire operations, I was only bitten once by a Cobra because I had failed to handle it properly and it took me a night to heal since the snake had inserted little venom. I realised that the snake was only being defensive, so it was sending an alarm shot, for a snake can feel one’s intention just like a dog and this is through the way a person interacts with it,” explained Marimo.

It is a pity that with all the risking, people can hardly part with $30 he expects as a form of appreciation. However, due to his passion, he stated that no amount of money, even millions, can buy the pleasure he receives from saving lives of both species.

“People are hardly paying for my services. Only a few consider all the expenses I encounter travelling to their places. This, however, will not stop me, for no amount of millions can buy the satisfaction I obtain from saving lives,” commented Marimo.

Apart from the ordinary citizens, the man longs for the appreciation of the wildlife responsible authorities by permitting him to work with them since he surrenders all the reptiles he collects from people to them. The sparkle in his face suddenly disappears as he recounts people’s perceptions of him.

“People assume that I am associated with traditional spirits since snakes are associated with evil spirits, which is false. Some go as far as requesting for the traditional medicine I use to charm the snakes. I realised that blacks always doubt each other’s potential. My work is easy to appreciate if being carried out by a white person. This reflects nothing but the pull-down syndrome among us black people,” he lamented.

All these misconceptions from people have been surpassed by the appreciation and love he gets from his wife and two children. He says this makes him bolder. The adorable children take pleasure in their father’s snake world as they view the reptiles as pets.

Through his family support, he has also managed to acquire much knowledge and through his Facebook “Chawa’s wild adventures”, shares information and gets in touch with everyone who requests for his services. It is usually busy during the rainy season as in their quest for protection from the downpour, snakes become uninvited visitors in people’s homes.

“I advise people to practise clean habits to avoid snakes. When people are confronted by a snake, they should not act out of ignorance and kill it because it is part of the environment. Snakes balance up nature as they act as disease controllers by killing pests that cause different types of diseases. I can be contacted on 0772269647,” advises Marimo.

Despite his efforts to save lives, Marimo revealed his worry on certain aspects that may hinder his work.

“One of the major challenges the nation is facing concerning snakes is the lack of anti-venom. There is no anti-venom in most hospitals except at the Trauma Centre and Avenues Clinic.

“This is because anti-venom is expensive and it quickly expires, so my proposal is to set up an anti-venom facility, where all necessary anti-venom can be stored. I wish to have a centre that educates and advises people about snakes, which I have already liaised with experts from South Africa, who are willing to come and demonstrate as their way of educating people,” he appealed.

Apart from his passion, Marimo owns a mine in Mazowe, which earns him a living. He is truly an adrenalin junkie and his other passion – drag racing – proves it.

Zimbabwean Snakes: an Overview of the Deadly-Dozen (plus Python)

People and snakes have had a complex and somewhat negative relationship since Biblical times; which, apart…

Click below to read about this man's unusual skill. http://www.newsdzezimbabwe.co.uk/2020/09/meet-zimbabwes-largest-snake-collector.html