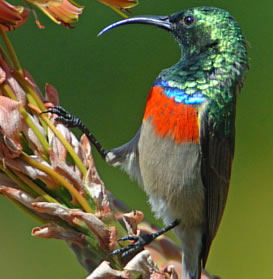 This one of at least five different kinds of sunbird that we can see in the northern suburbs of Harare.

Can you see the “double collar” in the two pictures above?  There’s the red band, obviously (though that’s not exactly a ‘collar’ which should be around the neck, surely?); but there is also the thin blue band above that – blue as in iridescent blue – sometimes visible only from certain directions and in certain light.

Actually, to be honest, the second of the pictures above shows a different subspecies found in Tanzania, known as “Pinto’s Double-collared Sunbird”, described as “recently split off” from the Miombo.  Presumably a subspecies has decisively ‘split off’ when it does not (or cannot?) breed with the original species: although, let’s face it, Tanzania is far enough away from Zimbabwe to ensure that the matter of interbreeding never arises.

To look at these two pictures, they look pretty much the same, both double-collared: true, the Pinto’s (the second one) looks duller in colour and fatter, and also, may I say, more complacent, than the Miombo.  But that sort of thing changes with the way they are sitting or the state of alertness that they are in, or the strength and direction of the light and the wind, and so on: it is hard to tell from these pictures just how they are different.  Notice, though, that the beak of the Miombo appears to be more deeply ‘decurved’.  This question of different species can be tricky.

It is probably just as difficult to distinguish these birds in the field as it is in these two photographs: some differences can only be appreciated when the birds can be examined in the hand.

Once I watched how this can be done in the Vumba in the eastern highlands of Zimbabwe.  This ornithologist set up her ‘mist-nets’ – very, very light like spider’s web and almost invisible – placed strategically in the known flight paths of these birds, into which they fly and become entangled but not injured.  Then she carefully extracted the birds from the nets and put each into a small bag while any other birds in the net are being extracted: in the darkness of the bag they ceased to struggle and were in less danger of injuring themselves.  After she measured and weighed each bird, and recorded the data, she placed a small identifying ring on one leg so that any changes could be noted if it was caught again: then she released them, unharmed, to buzz off into the trees.  It is, for some interesting reason, quite moving to hold a living bird gently in your hand, feeling the tiny heart beating.

Sunbirds, as I have said before, feed on nectar and insects and you can see them busy in the many flowering trees (especially the bauhinia) : these trees are good sources of both nectar and insects which are also drawn by the nectar.  I have mentioned before their ability to hover but they perch to sip the nectar or pick off the insect from the flower.  I also mentioned the adaptations that they have for this kind of feeding: long tongues, with barbed or feathery ends that help with the flicking up of nectar into their beaks.

Until just a week or so ago, these Miombo Double-Collared Sunbirds were among the regular visitors to my special sunbird feeder, hanging outside my bedroom window so I can watch them fluttering in and around the feeder, squabbling and chasing each other away. There is a definite pecking order: the bigger sunbirds spend as much time chasing others away as they do feeding themselves.  Sometimes the smaller bird will adopt a submissive position by hanging upside down from the perch from which they can sip the sugar water: when the bully has gone, they swing up again and swig some nectar.

I say “until a week or so ago” because they suddenly all disappeared and the sugar water in my feeder, untouched, fermented gently into alcohol.  I have taken it down.  Why have they gone?  I hardly see a sunbird in our garden any more.  And where have they gone?  The bird book describes them as ‘residents’ but also as ‘nomads’ and ‘local migrants’.  I guess they have moved away to another location in the suburb, perhaps one with more flowers and food.  Perhaps someone else is supplying them with (nicer) sugar water.  I wish them well, though I hope they come back.  It gives me a chance to make sure that my feeder is clean and not infected with any horrible fungus or whatever.