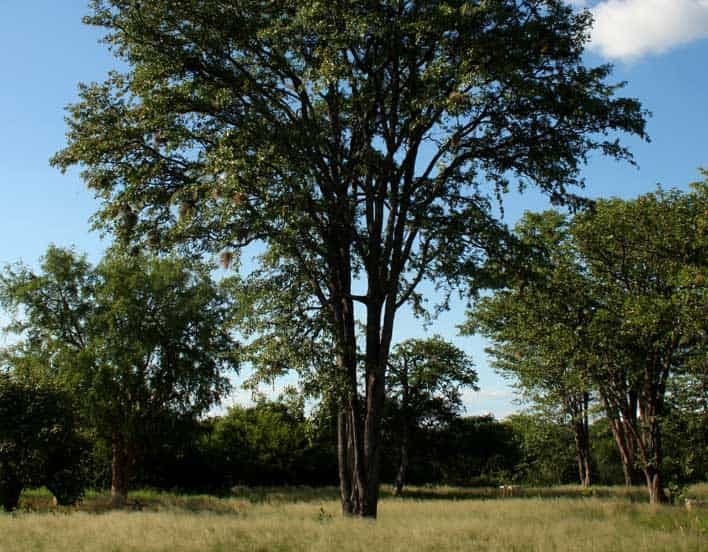 Anyone who has walked in Mopane country will remember the heat, the dry watercourses, the mopane bees around eyes and go-away birds, the sameness of the trees and the lack of any distinguishing features for setting your direction.

Colophospermum mopane, (Latinised Greek for “oily seed”) is commonly called in English mopane, mopani, balsam tree, butterfly tree, or turpentine tree (because of the turps-smelling gummy resin the tree produces). Its nam in other languages include:

Mopane woodland covers more than 100,000 square km in Zimbabwe, including the whole of the Zambezi Valley, the northeastern border, the Save-Limpopo lowveld, and much of the western border. Mopane is second in importance among the major vegetation types of Zimbabwe.

(Msasa/munondo, now widely referred to by the East African term miombo, is the first.) Mopane also grows extensively in Angola, Botswana, Mozambique and Namibia, and less extensively in Malawi, South Africa and Zambia.

Mopane can occur as majestic ‘cathedral’ mopane in optimum conditions, reaching up to 30 metres in height. When conditions are less favourable or where it has been over-exploited by elephant during the dry season, small Mopane shrubs known as ‘Mopane scrub’ and locally referred to as ‘gumane’, dominate. Under these conditions the bark provides a major nutritional source for the animals and Mopane is an important fodder plant for many animals, particularly elephant. The tree is also used in soil stabilization projects.

Flora of Zimbabwe describes Mopane as a small to medium-sized deciduous tree. It is a tree in the legume family. It usually grows with a narrow V-shaped, relatively sparse crown, that grows up to 10 meters tall and about 30 cm in diameter. It is often multi-stemmed (and coppices easily).  Young bark is light grey, darkening with age and broken by deep, longitudinal fissures.

Mopane has butterfly-shaped leaves (two leaflets grow from a single petiole) which are a bright green when they emerge and turn to a golden brown in autumn before they are dropped. When conditions are hot the two leaves fold together to cut down on transpiration and as a consequence the tree gives very little shade.

The Mopane tree flowers from December to January.  The flowers of are yellow-green, small and inconspicuous, in pendant clusters near twig terminals.

Fruiting occurs from April to June.  The pods start out green in colour and dry to brown. They are kidney-shaped, flattened and leathery.

The pods split to release a single flat, wrinkled seed dotted with resin glands which secrete a sticky resin allowing the seed to adhere to the feet of passing animals, for effective seed dispersal.