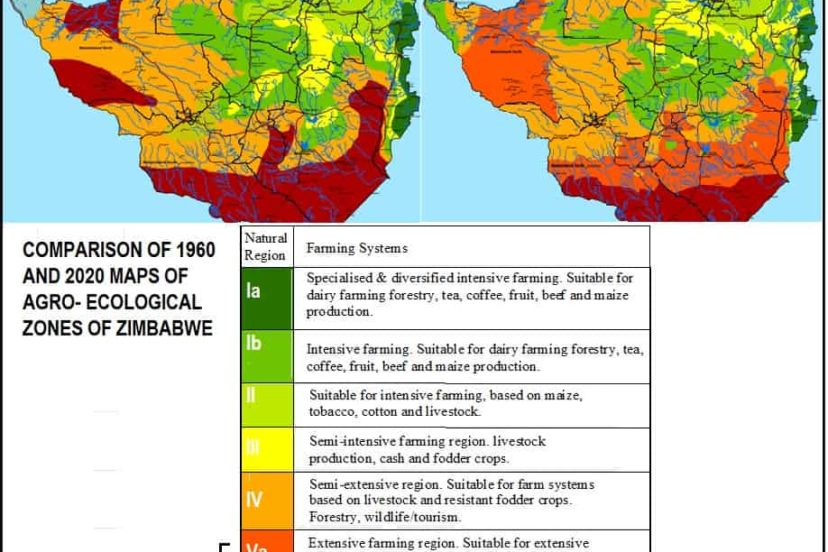 The following article by ZimFact on the new Agro-Ecological map for Zimbabwe  was published on 22nd September, 2020. I am reproducing it in its entirety because it contains a great deal of useful information about:

At the end I have added a diagram for the direct comparison of the two maps.

On September 15, 2020, the Zimbabwe government announced changes to the country’s agro-ecological boundaries, which had been in place since the 1960s.

The redrawing of the agro-ecological regions has been made necessary by changes in weather patterns brought about by climate change, Cabinet said.

“In response to the urgent need of aligning agricultural practice with the changing climatic patterns, the government of Zimbabwe, through the Ministry of Higher and Tertiary Education, Innovation, Science and Technology Development, initiated a revision of the country’s agro-ecological zones,” it said in a statement.

What are agro-ecological regions?

According to the United Nations’ Food and Agriculture Organisation (FAO), agro-ecological regions define “zones on the basis of combinations of soil, landform and climatic characteristics. The particular parameters used in the definition focus attention on the climatic and edaphic requirements of crops and on the management systems under which the crops are grown. Each zone has a similar combination of constraints and potentials for land use, and serves as a focus for the targeting of recommendations designed to improve the existing land-use situation, either through increasing production or by limiting land degradation.”

The purpose of zoning, as carried out for rural land-use planning, is to separate areas with similar sets of characteristics for development. This is useful for planning appropriate land-use programmes for specific regions.

The government says the previous zoning, drawn up between 1945 and 1960, had become outdated and needed to be updated to reflect shifts in climatic conditions over the past six decades.  Researchers, scientists, farmers and development practitioners have noted that agricultural practices were still based on conditions and zones developed over half a century ago, while there has been significant climate change over time.

“Farmers have continued to follow the traditional way of practising agriculture as there has been no revision in the pattern of agricultural practice. As such, the continued utilisation of this seemingly outdated map to inform agro-economic national planning is severely affecting its full revenue generation potential,” Professor Desmond Manatsa, a climate science expert from Bindura University of Science Education who led the project to revise the zones, told The Herald newspaper.

The Zimbabwe National Geospatial and Space Agency (ZINGSA), which was established in July 2018, was among the government agencies on the programme, along with the Meteorological Services Department and Agricultural Extension Services and 20 local scientists, drawn from Bindura University of Science Education (which was the lead institution) University of Zimbabwe, Midlands State University and Chinhoyi University of Technology.

How was it done?

According to Manatsa, the revision of the agro-ecological zones was done through the utilisation of geospatial technologies combined with rigorous statistical analysis of climatic data, field validation and stakeholder consultations.

The process, according to Higher and Tertiary Education Minister Amon Murwira, took two years, while the old map was developed over 15 years.

“During the 1950s and 1960s…there were no computers, used hence they manually overlaid isolines of climate parameters superimposed on soil resource maps and vegetation to delineate five agro-climatic zones (Region I to V), a process that was less accurate, overly generalised, time consuming and rather too costly,” Manatsa says.

“Advances in technology in areas such as Geo-technologies, Geographical Information Systems (GIS) and Remote Sensing have provided unlimited opportunities to integrate various spatial datasets that are important in the delineation of homogeneous regions that constitute Agro-Ecological Zones. The provision of these datasets by modern technology therefore becomes a key motivating factor for this work. Geo-technologies have now and will continue to revolutionise the way data is collected, analysed and archived.”

The latest technologies and techniques are more efficient, accurate and cost-effective compared to the old 1960s methods.

What are the major changes?

The revision of the agro-ecological Zones has resulted in significant shifts in the boundaries, with some regions contracting due to changing rainfall patterns.

According to Manatsa, Regions III, IV and V expanded at the expense of Region I, IIa and IIb. (Editor’s comment: In other words the areas that used to receive the higher rainfall and be the most productive agriculturally are now smaller than they were – and the more arid, agriculturally challenging areas are bigger than they were. This reflects climate change which is affecting Zimbabwe mainly in the form of reduced rainfall.)

Further, Zimbabwe’s most arid zone, Region V, has been subdivided into Region Va and Vb, reflecting the decrease in rainfall received in the region.

The region classified Vb, the southernmost belt which borders Botswana, South Africa and Mozambique, is now deemed to be unable to sustain any form of rain-fed agriculture – including the drought-tolerant crops which previously did reasonably well there – without being complemented with irrigation.