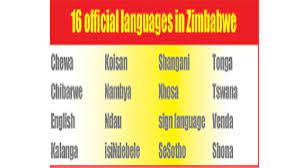 The constitutional changes of 2013 provided recognition of the many cultures within the country and in particular gave official status to these 16 languages meaning that they must all be:

In this way, Zimbabwe is saving many minority languages from extinction.

Below is a brief note about each of the languages. Though in each case figures are given for the number of speakers you need to be aware that there has never been a scientific survey of who speaks which language in Zimbabwe, so the figures tend to be rough guesses.

The map below gives a very general indication of where the various language groups are found within Zimbabwe.

The Chewa language (Chichewa) is also called Nyanja (Chinyanja). The name Nyanja means “lake” and refers to the Chewa tribes where the language is thought to have originated, around Lake Malawi. (Chewa was the only national language of Malawi from 1968 to 1994.) It is a Bantu[1] language of the Niger-Congo language family. It is spoken in north-eastern Zimbabwe and is estimated to be the third most widely spoken language in Zimbabwe after Shona and Ndebele. Across southern Africa as a whole, from Malawi, through Mozambique and into South Africa Chewa is the mother tongue of about 15 million people.

Chiberwe is also called Barwe in Zimbabwe and Sena in other countries. It is widely spoken in Malawi and Mozambique but is also represented in Zimbabwe in the north-east of the country. It is also a Bantu language and a member of the Niger-Congo language family and is considered to be a language at threat of extinction.

English is an Indo-European Language brought to this part of the world by English settlers in the colonial era. Today, Zimbabwean English is a regional dialect of English that is spoken natively by around 5% of the population of Zimbabwe.  Of all the Zimbabwe official languages English is the one that is most widely used as a lingua franca, for conducting official business and for schooling and many Zimbabweans, therefore, speak English as a second language.

Somewhere between 300 000 and 700,000 people speak Kalanga (TjiKalanga) in the south-western part of Zimbabwe bordering Botswana, where the language is spoken by about 1 million people. (There are some dialect differences between the two Zimbabwean and Botswanan variations of the language.) Kalanga is also a Bantu language from the Niger-Congo group of languages.

Khoisan is known outside Zimbabwe as Tshwa or Tsoa. It is from the group of Khoe languages, the largest of the non-Bantu language families indigenous to southern Africa. The language is spoken by small group of San people that reside in the South-western region of Zimbabwe and are related culturally to the San people in Botswana. It is the mother tongue of around 4 000 people, split between Botswana and Zimbabwe with approximately 3 500 in Zimbabwe alone.

It is very much considered to be a language threatened by extinction. One of the dialects is Tjwao (formerly Tshwao) which is believed to be spoken by only 20 people, all over 50 years of age.

Nambya or ChiNambya is a Bantu language most closely related to Kalanga in and sharing around 75% of its core vocabulary with the Shona language.  It is spoken by between 80,000 and 100 000 people in north-western Zimbabwe, particularly around the town of Hwange as well as people in neighbouring Botswana. The language is under great social pressure from Tonga and Ndebele and often borrows words from those languages, as well as from English.

Ndau (also called chiNdau, Chindau, Ndzawu, Njao, Sofala, Southeast Shona, Chidanda or Ndaundau) is a Bantu language that is sometimes seen as a dialect of Shona. It is spoken by people living in the Chimanimani and Chipinge regions of Zimbabwe and also in Mozambique.  It has roughly 2.4 million speakers, spread across southeastern Zimbabwe and central Mozambique.

Ndebele goes by a number of names. Its speakers call it isiNdebele, while it was formerly known as Matabele. It is also referred to as Northern Ndebele and Zimbabwean Ndebele, differentiating it from language known as Ndebele that is spoken in South Africa. (Though the two share the same name, they are different languages.) Ndebele is a Nguni[3] Bantu language spoken in the Matabeleland region by about 20% of the Zimbabwe people. A few Ndebele speakers reside in the north-eastern part of Botswana that is bordered by Zimbabwe. This language is mutually intelligible with the Zulu language of South Africa (85% of the two languages’ lexicon is shared) and it became a key part of Zimbabwe’s history in the early 19th century, when speakers migrated from KwaZulu, conquering the Shona and embedding their language in what is now Zimbabwe.

The Shangani language a Bantu language whose Zimbabwean name is associated with the small farming community of Shangani in Zimbabwe. It is spoken by the tribes that reside along the Shangani River and in southeastern areas of the country. It is also spoken in Eswatini, Mozambique and South Africa where it is called Tsonga and Xitsonga by its speakers.

The Zimbabwe National Association of Deaf has 280,000 deaf members. Unlike many other countries, Zimbabwe recognises sign language as one of its official languages. However, it does not specify which sign language is the official one; research by the Max Planck Institute for the Science of Human History lists Zimbabwe as having no less than seven “sign languages” that have developed over the last 50 years. And some deaf people use American Sign Language.  One of the important sign languages in Zimbabwe is the Masvingo School Sign which is thought to be quite different from other sign languages spoken in Zimbabwe.

Shona is a Bantu language spoken by 70 to 80% of people of Zimbabwe, about 10.8 to 14 million people. Shona is a Bantu language that has four main dialects. They are Karanga, Korekore, Manyika and Zezuru. Standard Shona is derived from the Central Shona dialects, especially Karanga and Zezuru. Some linguists see Ndau as another dialect though the list of official languages registers it as a separate language. The Shona people live mainly in central and eastern areas of Zimbabwe.

The Sotho language, also known as Sesotho, is a South Bantu language of the Sotho-Tswana group. There are around 5.6 million native speakers of Sotho in southern Africa and is spoken primarily by the Basotho in Lesotho, where it is the national and official language and in South Africa, where it is one of the 11 official languages. The Basotho migrated to present day Zimbabwe in the late 19th Century and, ever since, they have gone through many phases of constructing belonging and carving out an enclave in an area dominated by a linguistically and culturally different autochthonous group. A relatively small number of Shoto speakers reside in the southern part of Zimbabwe.

The Tonga language is also known as Chitonga, isiTonga and Zambezi. Approximately, 1.5 million people speak this Bantu  language in southern Zambia and northern Zimbabwe as well as some people in Mozambique. This language is not standardized so you will find quite widely differing dialects of this language in various regions. Some speakers use a bilabial nasal click while others do not and speakers of the same dialect may spell words differently to each other.  Many Zimbabweans also speak Tonga as a second or third language.

The Tonga people of Zambia and Zimbabwe (also called ‘Batonga’) are related to the Batoka who are part of the Tokaleya people in the same area, but not to the Tonga people of Malawi. In southern Zambia they are patrons of the Kafue Twa. They differ culturally and linguistically from the Tsonga people of South Africa and southern Mozambique.

The other name of Tswana is Setswana. Tswana is a Bantu language spoken by between 5 and 8 million speakers across Botswana (where it is the official language, along with English), South Africa (where the highest proportion live), Zimbabwe and Namibia. As you would expect the majority of Tswana speakers live in the south-west of the country, towards the border with Botswana in the Bulilimamangwe and Mphoengs districts (between Ramakgoebana & Simukwe rivers) close to the Ramakgoebana border between Zimbabwe & Botswana.

Venda or Tshivenda or Luvenda is a Bantu language spoken in the northern part of South Africa in the Limpopo Province whereas in Zimbabwe it is spoken by  Lemba people (only around 150,000 people) in the southern part of Zimbabwe, along the Limpopo River. There are also Venda speakers in Botswana. The language is related to Kalanga. The letters C, J and Q are only found in the language when describing foreign words and names. Venda is written using the Latin alphabet, along with five accented letters that aren’t used in English: ḓ, ḽ, ṋ, ṱ and ṅ.

Xhosa is an Nguni Bantu language, known for having a great many click consonants used in around 10% of basic vocabulary. It is only spoken natively by around 200,000 Zimbabweans (a little over 1% of the population) in two relatively small communities in the vicinity of Bulawayo but Xhosa is an important language in cultural terms in Southern Africa and Zimbabwe’s former national anthem – Ishe Komborera Africa – was based on a Xhosa hymn.

Questions concerning the official languages of Zimbabwe have been set on General Papers in the last three years:

GP.FEB.22.QU.12   Beside Shona, English and Ndebele, identify the common official language you would use to communicate with people in the following Zimbabwean towns:

[1] A Bantu language is one of a group of some 500 languages belonging to the Niger-Congo language family. The name derives from the fact that all have the root “-ntu” in their word for “man”.

[2] It is important not to confuse Kalanga with the Shona dialect Karanga – though obviously they have much in common because they are both Bantu languages.

[3] The Nguni languages are a group of Bantu languages spoken in southern Africa by the Nguni peoples. Nguni languages include Xhosa, Zulu, Ndebele (sometimes referred to as “Northern Ndebele”), and Swazi. The appellation “Nguni” derives from the Nguni cattle type.

Introduction Most people come to Africa expecting or hoping to see The Big Five - elephant,…